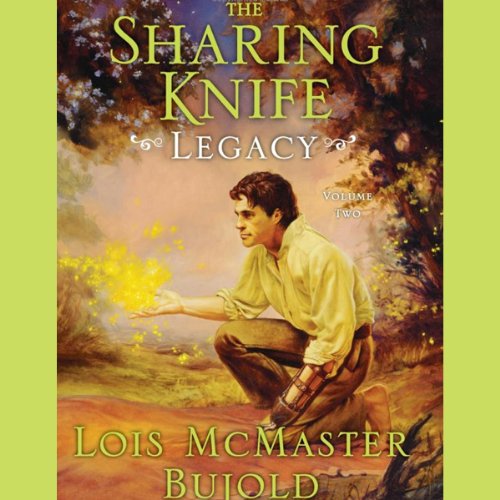 Filled with magic, heroism, and all-too-human characters, Bujold's Sharing Knife saga is both a gripping adventure and a poignant romance. In this second volume, Fawn Bluefield, the clever farm girl, and Dag Redwing Hickory, the seasoned Lakewalker soldier-sorcerer, are newly married. Their arrival at Dag's home on Hickory Lake Camp is met with prejudice and suspicion, as many in the camp deny the literal bond between Dag and Fawn, woven in blood in the Lakewalker magical way.

Then Dag is called away by an unexpected and vicious malice attack on a neighboring hinterland, threatening Lakewalkers and farmers both. What his patrol discovers there will not only change Dag and his new bride but will call into question the uneasy relationship between their peoples - and may even offer hope of a less divided future.

Sharing Knife..Not to be missed

This series is an odyssey if ever there was one; the author's characterizations are consistent, rich, and deep. You'll love the relationship between Dag and Faun, her hero worship of her husband is nicely balanced by his deep respect for his wife and her surprising insights. I'm not quite finished with the last volume of the last book, but it has met my litmus test of an audio book listened to in the car...I hope for traffic jams.
The complexity of the concepts are well developed; the different aspects of "ground" subtly connected and evolving as Dag discovers the depth of his talents. The reader is left searching his/her own life for evidence of "ground sense" and how it can enhance one's life!

A bit slow, but excellent

Slower than most fantasy novels, especially at the start, but gathering strength and momentum as it goes. You will probably want to hear or read the first novel first . . . even more so than one needs to read the _Curse of Chalion_ before tackling _Paladin of Souls_.

The magical background of this world and the terrible threats to it from the malices come more into the fore, with some exciting scenes and even more interesting revelations.
The romance and family relationships that sometimes seemed a little stereotyped (or at least schematic)in the first novel also become richer and more complex.

All in all, this sequel is better than the first book, and leaves me hoping for a third, which would possible but not necessary. This book leaves some issues resolved, but further adventures possible.

I am very sensitive to language, both written and spoken, and here were my small problems.
First, Bujold opts for a sort of folksy Amercian frontier lingo in a land very different from the American frontier, though there are a few similarities. To have mages and patrollers say things like "I reckon" was jarring to me, and thoguh I finally got used to it, it didn't add anything. I don't know whether that would bother most people or not.

Secondly, I found the reader only fair-to-good. Her expression was decent, but her intonation was only so-so.

But if you find the reading OK in the sample, and you are content with a slower-than-average paced book, you will find great rewards in the listening.

I couldn't put it down.

Filled with action, the series is nevertheless perfect for those who seek a unique romance with their paranormal fantasy. This is a love for the ages. The interplay between the world weary patroller and the fresh young, but dazzlingly wise younger woman, will find the dialogue true and sparkling, and the romance mutually healing in unexpected ways. The characters are made for each other, and each brings their own amazing abilities to the task of saving a sometimes terrifying world. Absolutely riveting, and supremely lovely.

Loved Volume 1 and this one too!!!

Loved this one too! Characters interesting, entertaining, and we feel as though we are in the story as well! I am laughing with some of the characters with their situations, tearing, and am at the edge of my seat when they meet the boggles!
Bujold is an excellent writer!!! I love these volumes as much as I did with her Vor characters.

This is a must read series. I can't wait until the next book comes out. This storyline is well written and the chacter detail is just amazing. This author did an outstanding job.

Among the best audio books I have ever listened to. The characters are exceptionally well developed and the narrator is great. I became a fan of Bujold by listening to these books.

This is a continuation of the sharing knife story line, not just "another episode". As usual there isn't a ton of action but rather very colorful characters, some you like and some you very much do not.
Overall I am pleased with the story. My one complaint is that there is one scene that is a bit over-explicit but it is quite short.

A great follow on from the original story and expands the world and characters. Another great fantasy story. Looking forward to part 3. Great narrator. Recommend

Makes me want to start on book 3 right away.

All aspects of story from book one are intensified, from malice hunting to family drama. Dag sure has evil siblings.

Dag and Fawn travel to Hickory Camp so he can check in, and she can check the status of the Sharing Knife.
They have serious issues with his mother and brother; and Dag faces the most evolved Malice he’s ever seen.
They leave Camp when they tire of the prejudice against Farmers, and they decide to travel.
Dunne does a great job of character differentiation and expressing emotion in her narration.

Beautiful writing, a novel to savour

Just so good. Sweet, challenging, thought provoking. A fantasy world that is utterly believable and real. And as always stunningly well written.

The Sharing Knife books unfold at a different pace from the Vorkosigan and Chalion/Five gods books. But they are wonderful in their own way.