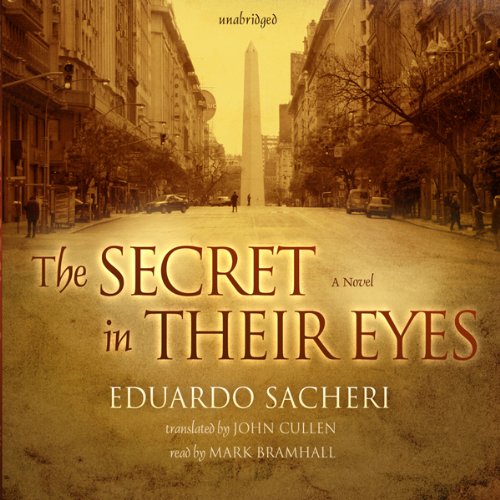 Benjamín Chaparro is a retired detective still obsessed by the brutal, decades-old rape and murder of a young married woman in her own bedroom. While attempting to write a book about the case, he revisits the details of the investigation. As he reaches into the past, Chaparro also recalls the beginning of his long, unrequited love for Irene Hornos, then just an intern, now a respected judge. Set in the Buenos Aires of the 1970s, Sacheri’s tale reveals the underpinnings of Argentina’s Dirty War and takes on the question of justice - what it really means and in whose hands it belongs.

Eduardo Sacheri's first collection of short stories was published in Spain in 2000 under the title Los traidores y otros cuentos. Three other collections were published between 2001 and 2007, all of which have been bestsellers in Argentina. The film adaptation of his novel La pregunta de sus ojos won the Academy Award for Best Foreign Film in 2010.

©2005 Eduardo Sacheri; Translation 2011 by John Cullen (P)2011 Blackstone Audio, Inc.
“A brutal murder is the starting point for this strange, compelling journey through Argentina’s criminaljustice system…A view of the world as a dark place illuminated by personal loyalties.” ( Kirkus Reviews)

Cosa pensano gli ascoltatori di The Secret in Their Eyes

Expertly read. Nothing was lost in translation. I watched the movie years ago and was interested when I saw it was a book. I loved it and only wish I didn't already know the secret.

Movie Must Be Better Than the Book

Although this book had the potential to be captivating, gripping, intriguing, it was not; instead, I felt I had to slog through the entire story with no emotional connection with any of the characters and no shock or horror or curiosity - even when the "twist" at the end was revealed. I'm not sure who to blame for this. I suppose it could be the author that constructed a story too convoluted and dull to enjoy or, more likely, it was the translator who unwittingly stripped the passion that I suspect was in the original Spanish language version. This book was made into an Oscar-winning movie in 2010. Although I have not seen the movie, I suspect this may be one of those cases where the movie is better than the book.

Three stories interwoven into one. Some passages are absolutely beautiful in their use of language

Struggle to finish! The narrator had no emotion in his voice at all !!! BORING! I do not recommend!

Mark Bramhall delivers lines with such perfection , the story seems to live and breath. It was hard to keep track of the characters though. But otherwise a recommended listen.

a lot of introspection and incisive commentary on human foibles. this is not an action book.