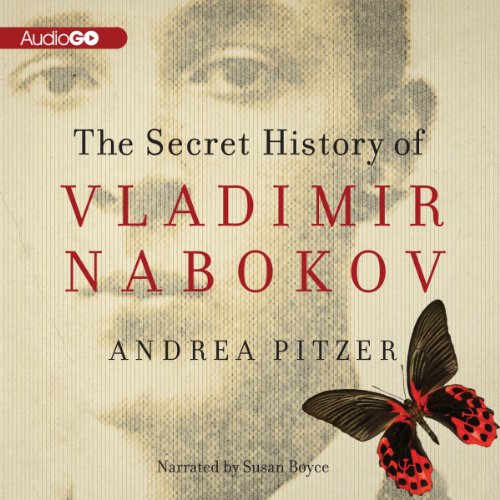 A startling and revelatory examination of Nabokov’s life and works—notably Pale Fire and Lolita—bringing new insight into one of the twentieth century’s most enigmatic authors.

Novelist Vladimir Nabokov witnessed the horrors of his century, escaping Revolutionary Russia then Germany under Hitler, and fleeing France with his Jewish wife and son just weeks before Paris fell to the Nazis. He repeatedly faced accusations of turning a blind eye to human suffering to write artful tales of depravity. But does one of the greatest writers in the English language really deserve the label of amoral aesthete bestowed on him by so many critics?

Using information from newly-declassified intelligence files and recovered military history, journalist Andrea Pitzer argues that far from being a proponent of art for art’s sake, Vladimir Nabokov managed to hide disturbing history in his fiction—history that has gone unnoticed for decades. Nabokov emerges as a kind of documentary conjurer, spending the most productive decades of his career recording a saga of forgotten concentration camps and searing bigotry, from World War I to the Gulag and the Holocaust. Lolita surrenders Humbert Humbert’s secret identity, and reveals a Nabokov appalled by American anti-Semitism. The lunatic narrator of Pale Fire recalls Russian tragedies that once haunted the world. From Tsarist courts to Nazi film sets, from CIA front organizations to wartime Casablanca, the story of Nabokov’s family is the story of his century—and both are woven inextricably into his fiction.

"Pitzer, like Nabokov, is a beautiful writer and gimlet-eyed observer, especially about her subject; even as an impoverished refugee living in America, she writes, “Nabokov was never shy about his sense of self.” Her attention to history’s moral components is refreshingly blunt: “The dead are not nameless,” she writes of the writers and others killed in Stalin’s Great Purge of the late 1930s. Inviting us to reconsider Nabokov, Pitzer also introduces herself as a writer worthy of attention." ( The Boston Globe)
"Vladimir Nabokov (1899–1977) always claimed that art and politics don’t mix, but this new biography suggests his own art tells a different story. In her first book, Pitzer focuses on one of the lingering mysteries about Nabokov: How could anyone so acquainted with the horrors of the Soviet Union (which killed his father) and Nazi Germany (which killed his brother) be so detached from the real world in his work? According to Pitzer, in his own imaginative way, Nabokov was bearing witness to the horrors he knew. Drawing on new biographical material and her sharp critical senses, Pitzer reveals the tightly woven subtext of the novels, always keen to shine a light where the deception is not obvious. A brilliant examination that adds to the understanding of an inspiring and enigmatic life." ( Kirkus Reviews, starred review)
"Certainly the most remarkable and insightful book on Vladimir Nabokov in many years. It is by taking big history with its small devastating details into account that Pitzer brilliantly manages to unlock a secret door in the oeuvre of the often misunderstood Mandarin. A must for even non-Nabokovians." (Michael Maar, author of Speak, Nabokov and The Two Lolitas)

I'm only about 1/3 through and already love the book. I studied Nabokov in depth in college, and it's a pleasure to return to his life and literature with new insights. That being said, the narrator's incorrect pronunciation of Russian words and names is quite jarring and detracts from the quality of the audiobook. One would think that being able to pronounce Ivan Denisovich and Eugene Onegin would be important enough to the editors to merit coaching for Ms. Boyce. Big miss by the audiobook publisher.

difficult to listen to

The book tends to be dry and didactic. As a Russian speaker I find it difficult to tolerate the way the narrator butchered Russian names and places.

Though the focus is obviously Nabokov and his family, I found the copious historical context to be fascinating. I would recommend to either a Nabokov fan or history buff.

Interesting view of of the backside.