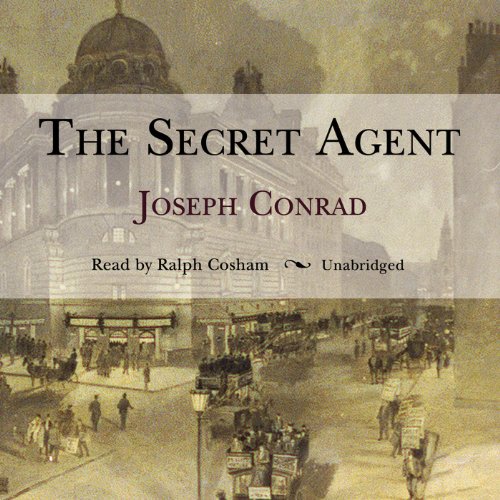 This classic precursor to the modern-day spy novel was recently in headlines when it was revealed that the Unabomber drew considerable inspiration from its prophetic portrait of terrorism. Written in 1907 and set in Edwardian London, The Secret Agent resonates just as strongly in today's world, where a handful of fanatics can still play mad politics and victimize the innocent.

Mr. Verloc keeps a shop in London's Soho, where he lives with his wife, Winnie; her infirm mother; and her idiot brother, Stevie. When Verloc is reluctantly involved in an anarchist plot to blow up the Greenwich Observatory, things go disastrously wrong.

The brooding atmosphere of conspiracy, powerful characters, and tragic plot of The Secret Agent are brilliantly captured in this audio production.

Public Domain (P)1996 Blackstone Audio, Inc.
"One of Conrad's supreme masterpieces...one of the unquestioned classics of the first order that he added to the English novel." (F. R. Leavis)

A Novel of Madness in a Time of Despair.

Let's just get this out in the open at the start of my brief review. I love Joseph Conrad. How can you not love a guy that can write circles around 90 percent of writers, and 99.9% of English speakers in his 3rd language. His craft is equaled only by his message. He was the proto-Nabokov. OK, so that is out of the way, you understand my bias.

The Secret Agent is novel of madness in a time of despair. At once both a harsh and scathing critique of anarchism and terrorism. Conrad produced a bomb throwing novel about the throwing of bombs, or as better said by Patrick Reilly the Secret Agent is "a terrorist text as well as a text about terrorism."

Geoffry Howard's narration was fine: nothing to complain or write home about. Solid work.

[Please do not post this review if the audio file will be corrected. Thanks!]

I can't comment fairly on the performance or story; this "review" is intended to communicate that Audible's file for the Blackstone Audio edition of Conrad's "The Secret Agent" has glitches and, overall, sounds very bad (and I'm no audiophile).

Nearly half of Chapter 10 is missing: The audio cuts out at, "...He knew he would be welcomed there. On entering the smaller of the--" and continues with, "Chapter Eleven..."

The very end of chapter 12 is also missing: The audio cuts out at, "...Its attitude of repose was so home-like and familiar--" and continues with, "Chapter Twelve..." (This was particularly annoying as it comes at what is possibly the most suspenseful moment in the book, the plot of which deals with time-bombs. The previous paragraph reads, "Mrs. Verloc cared nothing for time, and the ticking went on. She concluded it could not be the clock, and her sullen gaze moved along the walls, wavered, and became vague, while she strained her hearing to locate the sound. Tic, tic, tic." You won't find out what the ticking was in Audible's version!)

There are several other instances where it sounds as if the audio drops out for a moment. As far as I'm aware these occurred at the end of sentences, and I don't know if anything is actually missing (apart from the tail-end of a word).

Hopefully the good folks at Audible can and will correct this.

Overall, the sound quality is extremely poor and has a "hollow" sound to it as if it were subjected to extremely heavy-handed noise/tape hiss removal. This could explain the momentary drop-outs: quieter details of the narrator's speech may have been filtered out along with some noise/hiss. It doesn't seem to be merely the [expected] result of compressing about 8 1/2 hours of audio into 119 megabytes. Not having heard the original Blackstone audio, though, I can't be sure.

Would you consider the audio edition of The Secret Agent to be better than the print version?

Yes. Revisiting this novel after a few years, I was surprised how long it seemed. In a good way! It immersed me into the underworld of 110 years ago in seedy London, and I was reminded of how it was structured, so the expected climax comes halfway in (like "Hamlet").

Would you recommend The Secret Agent to your friends? Why or why not?

Yes. It's relevant as a study, however biased as Conrad admits in his typically honest preface. It reminds readers of the lure of terror and the machinations of the power structure.

I loved his voices in "Kim" full of Kipling's panoply of lively characters, however "politically incorrect" some may be by today's straitened standards. In "The Secret Agent," Cosham has to tamp down his approach, and this shows too his talent. He digs into the unlikable figures, and allows them to emerge as Conrad intended, fairly exhibited for our inspection.

Neither, but it's a harrowing few hours. As I said, the book plumbs into disturbing motivations and seems much more extended an immersion than the actual timing lets on.

This makes me want to seek out more Conrad on audiobooks. I read a lot of him decades ago, but I realize how enriching it is to hear his intricately constructed sentences and the cadences that make him, trilingual and late to English, one of our literature's best stylists.

This story’s fascination for me was the chess game played by the anarchists planning to make their political statement through terror, and the police and politicians needing to keep things from (literally) blowing up in their faces. A powerful exploration of the mindset of terrorists - the utter isolation and lack of human connection to the world at large. The primary terrorist, Mr. Verloc, claims political viewpoints that he is reluctant to act upon if it would upset his financially easy life. His wife may or may not understand his politics, but has made it a matter of principle to never “look too deeply into it”. The police detective and his Chief Inspector are at odds over how to handle the case, less for finding the culprit than for public relations and occupational competitiveness. Shady goings-on at one of the embassies further complicates things. In Conrad’s hands no one is really clean because of their own agendas, whether personal, financial or political, and we are privy to the mental gymnastics each character employs to rationalize his actions or lack of. It’s a dirty business all around, and innocents are certainly going to get hurt.

What ultimately kept this from being a 5-star read for me was the ending, which failed to capitalize on these multiple agendas when a twist of fate changed the whole picture. Instead of showing the fallout of a collapsing house of cards, Conrad took two characters and turned a very minor plot point into a star-crossed romantic tragedy, leaving the other chess players dangling. As masterfully as he handled the first ¾’s of the story, I wish Conrad had exposed the full explosion as experienced by the police and politicians. I think that might have made a more relevant connection to current day political controversies about global politics and terrorism.

Cannot say enough about the excellent narration by Ralph Cosham.

in books like Heart Of Darkness and The Secret Sharer, in ways, The Secret Agent is a better novel. This is not to take away from either of the two aforementioned classics, simply to say that Agent is more grounded and less sticky with the sometimes overladen psychological symbolism that Conrad could invoke, even in his great works. It is also a story remarkably modern, and it was cited many times after the September 11 terrorism. I cannot believe the Amazon reviewer who thought this book was "boring." I found it riveting!

Good but not the best Conrad

This is an odd story about a anarchist secret agent/agitator working against British interests prior to WW-I. The characters and story are somewhat one dimensional. The novel instead depends upon the existentialist world view projected upon the characters. The story is nonlinear, depending upon flashbacks and internal recollections to frame the story. This is an early example of proto-modernist writing, and is a bit interesting in seeing the clear influences of Conrad on later modernists.

This is not my favorite Conrad, for a better introductory taste, start with Heart of Darkness.

struggled to understand the flow

lots of time jumps that would probably be caught if actually reading the book. didn't always know why a character knew things because of a flashback.

Excellent writing by Conrad but plot twists unexpected. Ending was uneven. Not a satisfying conclusion.

The only thing worse than the uninspired writing, is the awful performance of the narrator.