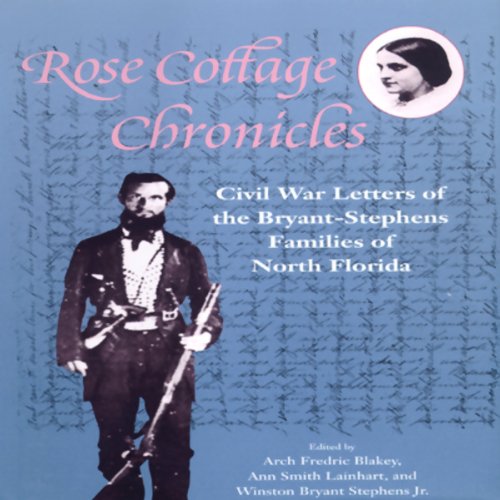 As fresh and poignant today as when they were written, these touching letters capture the heart of everyday life during the Civil War. Set both at home in Florida and on the front, the letters were written by two generations of families whose members included radical secessionists, moderates, and even a few Unionists.

The domestic letters, written mostly by mothers and daughters, describe their emotions in dealing with Yankee invaders and slaves, and offer a rare picture of the expanded roles of women as farm managers. From the military camps, soldiers write about Abe Lincoln, "colored troops", and deadly battles.

Especially, though, the letters tell the love story of Winston Stephens and Tivie Bryant, whose brief married life was interrupted by the war, then destroyed when Winston was killed in battle just days before their only son was born.

"Just about everyone will be the richer for hearing these letters." (Civil War Courier)
"Chris Walker revives these voices by stepping aside and letting their natural expressiveness and surprising understatement be heard, without sounding stiff or disengaged. With this approach, Walker faithfully preserves the lively courtship and marriage of Winston Stephens and 'Tivie' Bryant." (AudioFile)

This is the finest collection of antebellum and Civil War correspondence I've ever encountered. The book is compelling and offers a detailed view of life in Florida for an extended family. Even with slaves, Winston's wife, Tivy, had an incredible workload.

A skilled novelist would be severely taxed to create a plot that could surpass the complexities of the Stevens/Bryant families as revealed in the book.

Having read hundreds of Civil War non-fiction works, my recommendation for this book is very high.

Must Read for Civil War Buffs

This outstanding look at the actual lives and activities of a family during the Civil War is a must for serious readers on that era. The letters show open affection and intimacy between a husband and wife during a period of severe social rules. Given the abundance of books and scholarship of other states and battles, Florida finally is given a lively account of the movement and behavior of people that it deserves. Once again, truth is better than fiction.