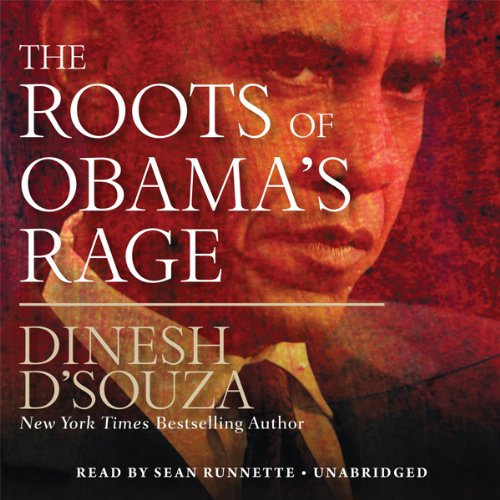 The Roots of Obama’s Rage

Critics of President Obama have attacked him as a socialist, an African American radical, and a big-government liberal. But somehow the critics have failed to understand what’s truly driving Barack Obama. Now best-selling author Dinesh D’Souza throws out these misplaced attacks in his new book, The Roots of Obama’s Rage.

D’Souza explains that the reason Obama appears to be working to destroy America from within is found, as Obama himself admits, in The Dreams of My Father: a deeply hostile anticolonialism. Instilled in him by his father, this worldview has led President Obama to resent America and everything we stand for.

Viewing Obama through this anticolonialism prism and drawing evidence from President Obama’s own life and writings, D’Souza masterfully shows how Obama is working to weaken and punish America here and abroad. From enacting crippling financial reforms to setting artificial withdrawal dates in Iraq and Afghanistan, Obama is trying to muzzle the capitalism which he sees as exploiting the weak. Our president, argues D’Souza, is more concerned with being labeled as America the Oppressor than winning the war on terror.

The Roots of Obama’s Rage reveals Obama for who he really is: a man driven by the anticolonial ideology of his father and the first American president to actually seek to reduce America’s strength, influence, and standard of living. Controversial and compelling, The Roots of Obama’s Rage is poised to be the one book that truly defines Obama and his presidency.

Dinesh D’Souza is the best-selling author of several books, including What’s So Great about America, What’s So Great about Christianity, and Life after Death. He has been a White House policy analyst, a fellow at the American Enterprise Institute, and a fellow at the Hoover Institution at Stanford University. He lives in Rancho Santa Fe, California, with his wife Dixie and their daughter Danielle.

“Dinesh D’Souza is one of the most original, insightful, and penetrating minds in America today.” (Paul Johnson, author of Modern Times)

The groundwork was fully laid; the performance was soft, not harsh, excellently delivered, and, believe me, this was no story! It was the thorough, methodical, we'll-researched work exposing the agenda of Barack Hussein Obama. If you love America, I highly recommend this book. Cudos, Dinesh Desousa, and Audible!

If you want to understand Obama.

This book is a must-have for anyone who wants to understand Obama. The author lays out the only working theory that I have encountered that explains why Obama consistently takes actions that harm America.

Biased and Undeserving of my Time!

This is an excellent book by Dinesh. He lays it out perfectly of who Barrack Obama really is, and everything Dinesh tells us can be checked on.. Recommended reading for all conservatives. All I can say is Obummer hoodwinked the whole country, you really have to read this, his roots of rage all go back to his father....He was Obama #1 during his campaign to become president, then once he became president he became Obama #2...Really you have to read or listen to this book.

What a great read!

This book is powerful, especially given how relevant it is with the current political climate.

stunning analysis for "dreams of my father" and getting in depth of Barrack Hussain Obama personality. great audio book .

Dinesh D'Souza has researched Barack Obama in an effort to determine the motivations of this enigmatic president. On the surface, it appears that Obama is striving to bring about socialist equality. But D'Souza takes a closer look and determines that an anti-colonialism obsession is what drives Obama. I found the analysis of Obama to be interesting and worth reading.

Much of "The Roots of Obama's Rage" is a summary of D'Souza's own opinions regarding economics and foreign policy. This is a critique of Obama's misguided ideas. I am happy to read D'Souza's opinions as I regard him generally to be correct. However, I think his objective is to convince people that socialism and appeasement are bad policy and my experience is that socialists and appeasers are not swayed by logic.

The narration is excellent.

Insightful Listen, But for the Glenn Beck Section

D'Souza has always been a breath of fresh air in today's mangled political discourse. Amid the pseudo-intellectual and outright fanciful commentaries from both the right and left, D'Souza injects an intellectual rigor, in-depth research and a cogent writing style in promoting his conservative perspective. As a centrist, D'Souza has been a important source of factual information and intelligent reasoning for the conservative side. And indeed in "Roots" he came through once again.

However in the chapter on economic policy D’Souza descends to over-simplification, calculated misrepresentation or naïveté. This chapter would have you believe that TARP, FinReg and stimulus spending were all engineered by Obama as part of a grand scheme to weaken post-colonial America. But the design of these policy measures were not conceived in the White House, but by a diverse group: Chris Dodd, Barney Frank, Paul Volcker, Tim Geitner and Henry Paulson (from an earlier administration). And I don't think you could argue that all these individuals share this anti-colonial viewpoint.

To demonstrate the `obvious' failure of stimulus he posits: Party A (taxpayer) gives money to Party B (Government). Party B now spends more, but Party A now spends less. Conclusion: No increase in economic activity--stimulus fails. Trouble is Party A is not a taxpayer, it is the Chinese. The Chinese give the US government money (i.e. buys our bonds) which is spent; current period economic activity/GDP must increase. Of course this has other rather negative consequences. But it is either a naïve or a purposely misleading to explain stimulus this way, one worthy of Glenn Beck.

Despite my disappointment in D'Souza in this section, I think this is an important book and would recommend it. There is enough substantive information here to overcome my misgivings.

This book is biased and irrational, and inflammatory in that the author tries to pass as some sort of political scholar. This book is clearly written by a white male but because of the racial connotations, he attempt to gain 'street cred' by publishing it under the guise of a minority.

The author's thesis in the book is that Obama has anti-colonial tenancies which is nothing more than a negative connotation of believing that one group of people should not impose their will upon another group of people.

He demonizes this principle, and does so, at best, with very loose connections, and at worst, with blatant irrationality: even going so far as to chastise Obama's heroizing of his distant father as a child.

This book is not for anyone wishing to lean anything about Obama or politics.

This book gives the listener a more international view of what "chip on Obama's shoulder" really looks like. Mr. Obama is an actual African-American. He is not an American Negro. He is unlike the offspring of Negro slavery. He is anti-colonial, and he considers America and its close allies to be colonial exploiters of the Third World, the home of his African ancestors. He wants to bring America down. The voters better wake up before the 2012 Election and make this guy a one-term president before he transforms America into a place where its citizens have to eat cold rice out of a small bowl with their fingers, while waiting for the occasional bucket of raw fish heads from our new Chinese masters.

What did you like most about The Roots of Obama's Rage?

The fair treatment of the subject.

What other book might you compare The Roots of Obama's Rage to, and why?

It made me nod a lot in agreement.