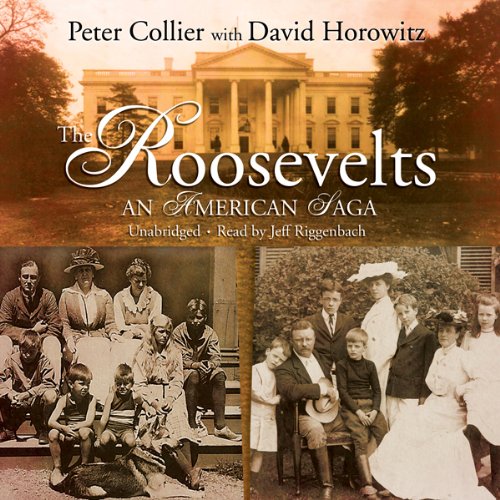 In this riveting book we see Teddy, the flamboyant politician and Rough Rider, who was also a "Papa Bear", passing on an ethos of sacrifice and achievement to his "cubs". There is Theodore, Jr., the "crown prince", handpicked by his father to carry on the traditions of Oyster Bay but unable to complete the mission. And Alice, Teddy's acid-tongued and fiercely loyal daughter, whose antics became the talk of Washington and who finally became a caricature, raving against her cousin's New Deal and trying desperately to preserve her father's legacy. There's also Eleanor, who translated the unhappiness of her marriage to FDR into political activism, eventually becoming First Lady of the World. And finally there is Franklin, always underestimated by Teddy's family, who made an alliance with Eleanor to become the nemesis of the Oyster Bay Roosevelts and, in the web of ironies that bind this family together, a truer heir to Teddy than any of his own children. Filled with drama and anecdote, presenting familiar characters in a penetrating new light, The Roosevelts is a soaring tale of triumph over heartbreak and frailty. But it is also a daunting story of the vanity of human wishes.
©1994 by Peter Collier Inc. (P)1994 by Blackstone Audiobooks

I had listened to "Mornings on Horseback" by David McCullough and it left me wanting to find out more about the Roosevelt family. "Mornings" focused on Teddy Roosevelt's early years -- past college and into his early political undertakings that led him to seek the presidency. But it stops before getting into his presidential years and I was also curious to learn about FDR and Eleanor. I had hoped this book would cover that area -- and it did. But this publication sorely pales in comparison to David McCullough's writing and Edward Hermann's narration. Rather than telling a compelling story, I feel like I am back in school listening to a teacher lecture on facts. And the narrator is quite expressionless and the audio quality is horribly "tinny". I had checked this review area to see if others had thought the same and was shocked to see only 2 excellent reviews listed. I think the content is probably worth trudging through the audio delivery, and I did. But it felt like more of a toil than not. Listen to the sample reading carefully before making your decision to purchase this audiobook. If you're willing to put up with the poor audio delivery, then definitely go ahead with the purchase. But if you're put off by that, then think carefully beforehand.

Peter Collier did a fantastic job with this book. He provided a great deal of detail and made it very interesting. He mentions the names of his subjects often enough so that the reader doesn't get lost. Jeff Ribenbachs naration kept me interested and I hope to hear his reading in the future.

The sound quality is really awful

Alas, I didn't read the helpful review of Wendy and bought the book. I've never ever heard an audio book with this kind of poor sound quality and suggest Audible shouldn't offer it in this state to their customers. Haven't tried listening to more than five minutes.

I throughly enjoyed this biography. I would recommend it.

What made the experience of listening to The Roosevelts the most enjoyable?

This is a richly narrated account of a fascinating American family. The book not only takes into account the deeds of the two Roosevelt presidents, it opens the curtain on their first and most intimate relationships.

I knew little of this family and this certainly gave a great insight. it is about the wider family and not just the two Presidents. There is little detail of the politics or the two wars.