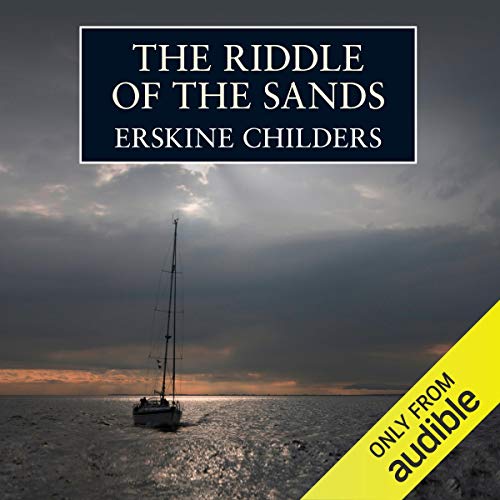 Riddle of the Sands is set during the long suspicious years leading up to the First World War and is a classic of spy fiction.
©2008 BBC Audiobooks Ltd (P)2014 Audible, Inc.

Cosa pensano gli ascoltatori di The Riddle Of The Sands

Slow beginning, but worth the wait

It takes awhile for this story to get going, but it becomes gripping later. Anton Lesser's reading is, as always, magnificent. This is a classic thriller - no gory stuff, and more of a mental cat-and-mouse game than an action adventure. There is a lot of sailing terminology, but it is not essential to understand the jargon (I didn't understand most of it) to enjoy the book.

A great read and excellent for the WWI centennial

Riddle of the Sands was published in 1903, 11 years before WWI started, but it is redolent with the suspicion between Germany and other countries that circulated at that time and resulted, finally, in the Great War. The Riddle is that our two young spies gradually realize that Germany is planning an invasion of England via the low-water tributaries in the Frisian islands, pulling low-draft troop carriers among the natural channels through the sands . The places named are real and you can follow the plot on Google Earth.

Anton Lesser does a superb reading, and reads with the tones of a young man, which is crucial, because while the plot and action are gripping, the characterization and character development is just as beautifully and humorously written, and this is why it seems to me almost a crime to settle for an abridged version of this classic. You won't regret listening to the original.

Our narrator, Carruthers, is a rising young star in the Foreign Office, and when he reluctantly boards the Dulcibella, he is deeply disappointed that it is not the stylish, elegant yacht with crew that he had dressed and packed for. He is a prig, and no sailor, and both faults get well and truly reformed during this story as he grows up, learns to sail, and finds his place in the world -- because however "at sea" he may feel in a boat, Carruthers has talent and courage as a spy on land that make the reader feel he would be wasted in the Foreign Office.

Of course there is a beautiful girl. And a dubious father. And Germans, nice and otherwise, whose accents Lesser performs convincingly. Best of all, there is a VIP who comes to inspect how well the invasion plans are working out. This is "he who insists" on coming.

"He who insists" is the Kaiser. Kaiser Wilhelm II, ruler of Germany, avid yachtsman, committed to building up Germany's navy. The idea that Germany might invade England is hardly remarkable: most wars involve the aggressing Continental power considering it very carefully, or actually doing it. The last ones were Napoleon and Hitler, both of whom made elaborate plans for invasion, but never actually carried them out. Eleven years after this book came out, Germany used its navy to try to starve England out via U-Boots sinking ships carrying imports, rather than invasion. But in the meanwhile this book, Riddle of the Sands, resulted in some large changes in the British navy basing, because in fact, the plan was plausible.

The most delightful moment in the book, to me, is when Carruthers, needing a quick exit from his hiding place, not only wrecks the Kaiser's boat, but also gets him to help cast off the dinghy he's in so he can row away. He gives brusque orders in the confusion of running the boat aground, and as a yachtsman used to quick hands-on sailing, the Kaiser obeys him!

There is a Michael York movie of this book which is excellent and fairly close to the original.

Admittedly, I am an hour and a half from reaching the end of this book. And I wouldn't make it to the end except that the pace has finally picked up. You'll listen for a long time to much ado about little with this one. Even the reader, Anton Lesser, can't really bring it alive.

riddle of the sands

if you are a sailor this probably would be great. I kept getting lost in the nautical stuff and so got bored with the book and wanted to get on with the story but could not wait for it to get there. gave up after three hours on part one. would not recommend to anyone who is not nautically savy, I thought the mystery would keep me going but too much nautical and not enough mystery!!!!!

A classic that is engaging, exciting, entertaining, and even humorous at times.

So well written that you forget it was written close to 100 years ago.... as good or better than any modern thriller.

If you can sail a boat, this might be great

If someone is an expert sailor, "The Riddle of the Sands" might be just the thing. But I am not a sailor and do not really know much about sailing. Port and starboard are about the extent of my knowledge. So for me this was a real slog - it seemed to go on forever with endless descriptions of activities on board the vessel and the various types of tides, currents and sand bars encountered. There is a story of friendship and a romance buried in there somewhere. The reader is first rate. But the two main characters remained remote and inaccessible to me and the paranoid plot did not make a lot of sense. In fact, teasing out what that paranoid plot actually is takes up the main part of the story. Apparently, at the time of its writing in 1903, Great Britain was concerned about the possibility of a land invasion mounted by sea. And at the time, this book stirred a lot of public debate. While the prose is intelligent, the notion of a hidden fleet in this age of satellite imagery, nukes and drones seems rather quaint. In short, it is not very relevant today; it may have reached its expiry date.

Erskine Childers wrote wry, rhythmical prose, full of dry wit. Anton Lesser's reading is beautifully judged, with every phrase pitched just so to capture the sometimes sardonic, sometimes wistful tone of Childers' voice - the scene in which the narrator Carruthers comes to realize that the rough, mean circumstances of his friend Davies' little boat have actually made him happy is a particular highlight. Lessor also captures the tension and excitement of the central espionage thread of the book superbly, drawing the listener into the experience until one thinks one is right there, moving through the fog toward the invasion plotters. This is a great listen, one of my favourite audiobooks, and one that I return to again and again.

This is an excellent reading of the book, and really brings it to life. The reader's voice is really well suited to the story, and brings out the pace of the book.

Riddle of the sands

An interesting plot line. Some of the naval terminology in the book would have thrown me without a dictionary handy.

However, in my opinion, the relationship between the 2 main characters and the mystery in the novel are the defining features. The language Childers uses combined with fantastic narration by Anton Lesser really draws you in and makes you feel involved.

I would happily recommend this book to anyone.

Intriguing but too technical

With reservations. It was fascinating considering the coastline involved as I had never looked at this on a map. The level of sailing detail was lost to some degree on this non-sailor and the slightly lecturing tone reveals that Childers had a polemic objective beyond just telling a story: he wrote the book so that English politicians and military leaders would take note. As a result of this focus, the narrative lacks a bit of punch.

I appreciate that this is a well-written and excellently narrated book but I found all the details about sailing, navigation and sea currents became tedious and slowed the action to the extent that it became boring. I gave up after 8 hours. The depiction of foreigners reflects the attitudes of the English pre-WW1.

I was doubtful in the first thirty minutes of listening, so much detailed description of sailing matters. but what that does is set a pace, of tides and tacks and charts and time, in which a totally compelling story of espionage, friendship and life/death risk, unfolds. Utterly gripping, convincing, tense. Read beautifully by Anton lesser.

Superb writing of the old school variety with masses of detail about sailing and charts. The story is slow to take off but there is enough interest to sustain the listener. The narrator is brilliant in maintaining the pace and in capturing the turn of the century voices of the characters.

entertaining traditional thriller with lots of solid stereo types and many heroic excitements. a little long in the telling but a good old fashioned story.

A different type of Spy novel

Would you listen to The Riddle Of The Sands again? Why?

Yes it was a good tale and nice to listen to.

Have you listened to any of Anton Lesser’s other performances? How does this one compare?

This was my first performance but he is a good narrator so worth a listen.

Its not your traditional spy novel but it was worth listening to.