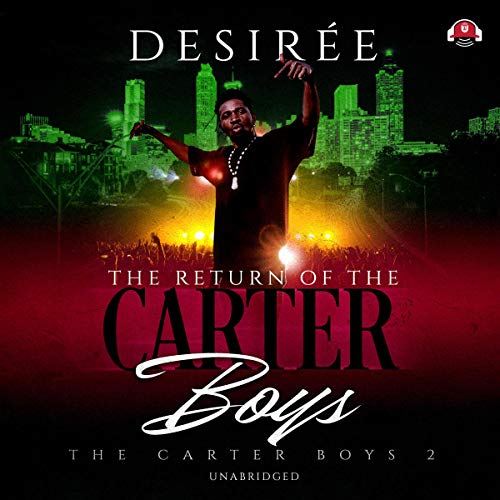 The Return of the Carter Boys

Sex, love, drugs, and music are just a few of the Carter boys' daily dealings. Drama follows them everywhere, especially with them being the largest, most dangerous organization Atlanta has ever seen. The women who want to be with them and the men who want to be just like them can easily get lost in the shuffle when the target is constantly moving to a new Carter's back.

Stepping outside of his relationship with his current woman seems impossible to Trent, but that all changes when the girl who had a childhood crush on him comes back into the picture looking totally different than he remembered. How does the smoothest, smartest, and prettiest of the Carter boys deal with this, especially now that he finally has Jade in his life?

Still not quite understanding his quiet and dark demeanor, Noelle can't help the attraction she feels for her mysterious neighbor, Shiloh Carter. Could it be the romantic and affectionate side he shows her when no one else is around? Or is the mystery surrounding this man really a major turn-on for her? Everything between the two neighbors is great until she gets a front row seat to a side of Shiloh that she never saw coming. Will Noelle stick around, or will she pack her things and move far away from Atlanta when she realizes that Shiloh is more dangerous than she thought?

why is it so difficult to find urban author's seri

I'm enjoying this book series but I can't find book 3. I don't know why audible makes it so difficult to complete an urban author's book series!

This book was all over the place & hard to follow! I couldn't keep up with who was talking or the storyline. And the narrator spoke to fast & LOUD! A MESS!

Very good book but the narrator was horrible. It was like she was rushing to finish the book reading extremely fast. It’s hard to enjoy the book at the speed she’s going.

I hate how dumb the girls are in this book!

This series have proved one thing to be true, the women in these books are dumb as hell and allow these guys to continuously play them. The men are misogynistic as hell, have double standards and are colorist AF. It makes me think that the author also feeds into misogyny, because she didn’t make not one of these women truly have a back bone and let these men have it. I’ll finish this series, because it’s entertaining, and for the sake of finishing the storyline. However, this may be my end of the road for this author. I can’t stand when women are created to be dumb and constantly played by men, especially Black women.

The story line is really good but the narrator does nothing for me. She read to quick with no difference in tone from male to female character

Goood series but smh the colorism in this book is to much! Very childish for college students . This book is giving high school , the men are very disrespectful , but I’ll finish the series just to see How it’ll all end

For people saying she reads too fast, there is a feature that slows down or speeds up the reading. Just adjust it to your liking. Overall entertaining book

This narrator reads ENTIRELY too fast. It was so noticable that I adjusted my speed settings, but that didn't help. Her voice is pleasant, but she sounds like shes reading run on sentences and using inflections at the wrong time. I can't finish this book.

I have listened to two out of the Carter Boys series and I am FRUSTRATED! 6 brothers (I think), 1 sister, 90 other women, it jumps back and forth so much that it gets crazy confusing and I need the novels to have clear endings and this series is a series of cliff hangers...

Narrator is no for me

The narrator made it hard to follow along. Very bland, all characters sounded the same and she rushed thru the book!