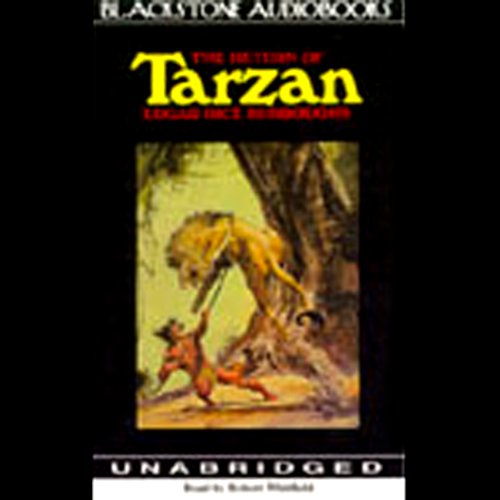 Tarzan had renounced his right to the woman he loved, and civilization held no pleasure for him. After a brief and harrowing period among men, he turned back to the African jungle where he had grown to manhood. It was there he first heard of Opar, the city of gold, left over from fabled Atlantis. It was a city of hideous men - and of beautiful, savage women, over whom reigned La, high priestess of the Flaming God. Its altars were stained with the blood of many sacrifices. Unheeding of the dangers, Tarzan led a band of savage warriors toward the ancient crypts and the more ancient evil of Opar.
(P)1999 by Blackstone Audiobooks

Another Great Tale of Tarzan of the Apes!

"The Return of Tarzan" is the second in his series of books about the title character Tarzan, with the first book edition published in 1915. The novel picks up where Tarzan of the Apes left off, and is equally exciting.

In "The Return of Tarzan", Tarzan learns that he is the true Lord Greystoke, but does not claim his title, because of his love for Jane, who has promised to wed Tarzan's cousin William Cecil Clayton. Clayton inherited the title, Lord Greystoke, when Tarzan's mother and father were declared dead. If Tarzan took his rightful place as Lord Greystoke, it would leave Clayton penniless, and Jane would suffer without money--so Tarzan walks away.

Disappointment in love, Tarzan returns to the jungle where he has many strange adventures--even before Tarzan reaches his jungle home, events take him to places he never knew existed...there's ocean cruises, Paris, desert adventures, spying for the French Secret Service, beautiful women, lost cities. etc., etc.

Tarzan makes an enemy of the powerful Russian, Nikolas Rokoff, who dogs his trail plotting and planning his demise. The action-packed gripping scenes and nasty villains are easily visualized due to Burrough's wonderful storytelling, and Robert Whitfield's great performance. The many twists and turns the story takes keep you riveted, unable to stop listening.

I've thoroughly enjoyed books 1 & 2 and highly recommend them. They really should be read in sequence.

What made the experience of listening to The Return of Tarzan the most enjoyable?

The interaction of charactes and wild animals.

What other book might you compare The Return of Tarzan to and why?

Have you listened to any of Robert Whitfield’s other performances before? How does this one compare?

Very easy to listen to. Speach clear and strong.

Neither. It took me back to my childhood when I searched all the book stores with my father because the libraries banned the books.

I'm happy to have the chance to enjoy the books, this time in audio form.

Great narration of an even more incredible book.

It has been a joy listening to the Tarzan books bringing back great memories from my childhood in which I read these books. After 40+ years they are like new again!

awesome adventures, exciting to listen to, wish Tarzan's voice weren't so deep to listen to

one of my favorites

Tarzan believing he's lost Jane gets a job and travels.

His adventures take him to the deserts of Africa and then back to his home in the jungle.

He learns of gold from a tribe and visits a lost city where men have de evolved and worship the sun.

I read my first Tarzan book when I was 10 yrs old and I was hooked! Since then I have read every Tarzan story I could find, now I can listen to them all anew! Tarzan for me is the first superhero. Edgar Rice Burroughs (ERB) fanned the flames of my passion for reading and gave me that sense of adventure that is still with me today! I found Robert Whitfield did a great job in bringing it to life. I would recommend everyone young and old to read Tarzan and let yourself get lost in his wonderful adventures!

I once owned the whole series. It’s delightful to find them as audiobooks! ERB lives on! Tarzan will never die!

Amazing story that has stood the test of time

A century old and it is still an enjoyable read. What an amazing writer.

can you really beat the original Tarzan books? All the chest beating and swooning? Thoroughly enjoyed the first 2 books.