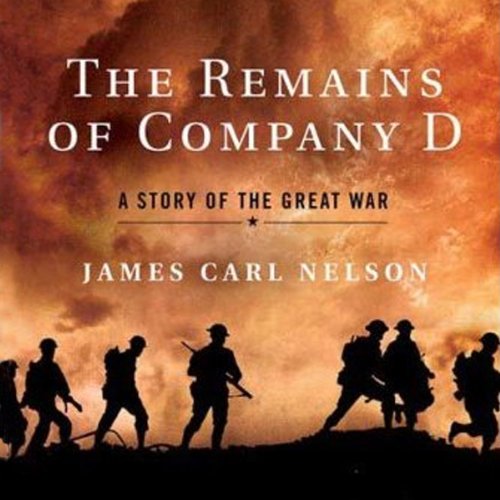 The Remains of Company D

Haunted by an ancestor’s tale of near death on a distant battlefield, James Carl Nelson set out in pursuit of the scraps of memory of his grandfather’s small infantry unit. Years of travel across the world led to the retrieval of unpublished personal papers, obscure memoirs, and communications from numerous doughboys as well as original interviews of the descendents of his grandfather’s comrades in arms. The result is a compelling tale of battle rooted in new primary sources, and one man’s search for his grandfather’s legacy in a horrifying maelstrom that is today poorly understood and nearly forgotten.

The Remains of Company D follows the members of Company D, 28th Infantry Regiment, United States First Division, from enlistment to combat to the effort to recover their remains, focusing on the three major battles at Cantigny, Soissons, and in the Meuse-Argonne, and the effect these horrific battles had on the men.

This is an important and powerful tale of the different destinies, personalities, and motivations of the men in Company D and a timeless portrayal of men at war.

A careless production gets in the way

I liked that the author chose to stick with his "Company D" and not wander off into the politics of the era or the grander scope of the war. You get a clear sense of his mission to shed light on his grandfather's part in the war and you feel a sense of satisfaction for him when he achieves that goal. That is also the downside to this story. A lot of repetition. A lot of "didn't we just read about that part of the battle?". Also, the frame of this story which the author clearly delineated at the beginning, means that no credit or acknowledgment of the commonwealth countries is given for their part in the war which was obviously a greater part of the overall story of the war. A newcomer to history might think that WWI was a minor skirmish that the Americans fought to save Europe from itself.

Didn't I just answer that?

I can tell you what I didn't like about the performance which is my reason for knocking off points from this otherwise enjoyable read. The producers and or the reader should have done their homework when it comes to proper pronunciation of European terms of that era. It was the writer's goal to keep the memory of his grandfather's war alive and the production team could have at least honoured him by getting such commonly used words (back then) as Boche and poilus right. (For the record Boche is pronounced "bawsh" not "bowsh" and poilus is pronounced "pwa-loo" not "poy-lus"). Hearing these mispronunciations dozens of times throughout the performance drove me to turn off the recording and return to the hardcover copy. It was shameful to hear such carelessness especially in these enlightened times. Also, though no fault of the reader, the sound effect "pup-pup-pup" used to illustrated the sound of the machine guns was over-used and tiresome. It drove home what an average day in no-man's land must have sounded like but it lost it's meaning after the twelve or thirteenth use of it. It is used at least once a chapter.

Was The Remains of Company D worth the listening time?

If you can let the deficiencies of the production slide, it is a very good "you-are-there" story of ordinary men in battle during WWI. War is not romanticized and the author is not sentimental about the time period.

Normally I prefer unabridged readings but this is a book that would have benefited from a tighter read. Too much "going over the same ground" quite literally as the author retraces the steps of several soldiers in the same company through the same battle. The effect is to hear about a battle being fought over and over and over again.