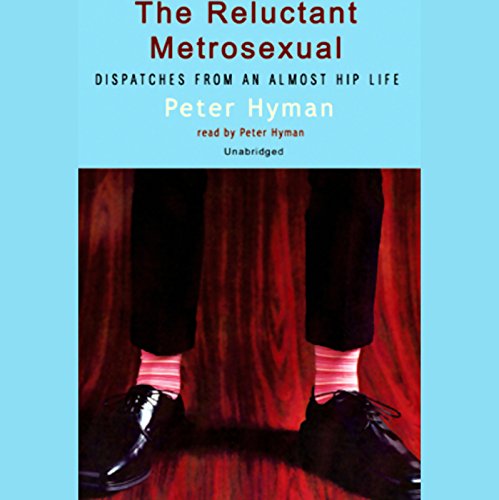 Read by the author, an essayist and stand-up comedian, this collection of hilarious essays is about a single guy attempting to live on the right side of hip.

If Peter Hyman is a metrosexual, a straight man with gay tastes, then he is one reluctantly, being loath to hitch himself to an au courant cultural trend, unless doing so would get him a movie deal or an actual girlfriend.

Peter Hyman's musings, more pop cultural than philosophical, range from the heartfelt to the absurd, whether he's describing the scotch-soaked grief of a bad breakup or his unfortunate attempt at a menage a trois. With sophistication and enviable wit, The Reluctant Metrosexual chronicles the promiscuity and perils of modern manhood.

"Hyman's stories have funny setups, and his conversational, easy-to-read prose carries a weird poignancy." (Publishers Weekly)
"A master of self-deprecation in the spirit of Joe Queenan and P. J. O'Rourke, Hyman takes on contemporary culture with a scalpel and a smirk." (Booklist)

There is a limit to accounts of personal tales you can put in a book...at least, they should be interesting and a bit significant to other people. Not in this book...if you want to hear the story of his mother choosing shirts for him and stories like that, things your brother-in-law could tell you for free, buy the book.

Nothing new but still entertaining

First, there's nothing "reluctant" about the author as he portrays himself in this book. He is that completely vain guy you meet at a party who spends most of his time name dropping. His only difference is the names that he drops are designer labels and trendy restaurants. He has the mistaken believe that his access to these "finer things" makes his life interesting and appealing to other people. Occasionally, he trys to look sophisticated by referencing books he read or his travels in Europe, but this also just reveals how shallow and self-obsessed he is. I'm sure someone would claim this book is meant to be satire, but if it is, they fogot to add the humorous edge to the commentary.

If your brother in law was as funny as Hyman I would pay him to tell me about shopping exploits. All told a very funny book. No real content, but witty insights. Not Sedaris, but worth listening to.

Maybe funny if you are American?

This book is possibly quite funny if you are American and therefore live slap-bang in the middle of American culture. However, it did not do anything for me.

I started listening to this and immediately skipped three hours in to see if it got more interesting - and it didn't. It's just a continuous ramble of 'anecdotes', though 'anecdote' implies to me that the stories are amusing.

This also would have been better narrated by a professional narrator with a more neutral accent, rather than the author whose accent I found really did not help.

I would advise anyone considering this book to listen to the audio sample to make sure that the very section that you hear is funny. If you split your sides laughing then go ahead and buy the full book as it is more of the same, otherwise save your money for something else!