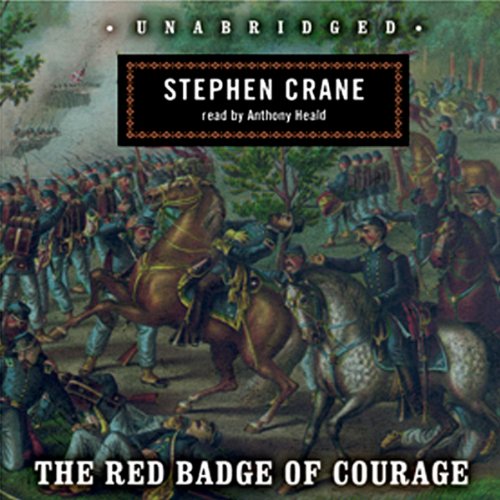 Following its initial appearance in serial form, Stephen Crane's The Red Badge of Courage was published as a complete work in 1895 and quickly became the benchmark for modern antiwar literature. In the character of Henry Flemming, Stephen Crane provides a great and realistic study of the mind of an inexperienced soldier trapped in the fury and turmoil of war. Flemming dashes into battle, at first tormented by fear, then bolstered with courage in time for the final confrontation.

Although the exact battle is never identified, Crane based this story of a soldier's experiences during the American Civil War on the 1863 Battle of Chancellorsville. Many veterans, both Union and Confederate, praised the book's accurate representation of war, and critics consider its stylistic strength the mark of a literary classic.

"A classic work of American literature." (The New York Times)

I had read The Red Badge of Courage on the page twice before. It's an extraordinarily powerful novel. Crane packs more psychological truth and insight into this short work than most writers do in novels four times its length.

I was, however, unprepared for the new power that Anthony Heald's performance brought to the book. It is an incredibly rich performance, nuanced, taught, full of raw emotion where appropriate. It truly felt as if I was reading the book for the first time.

The Wounded have a Red Badge of Courage

The Red Badge of Courage by Stephen Crane, is the tale of a single union soldier’s thoughts as he chooses to go to war, his mind upon entering the service, his fears before his first battle, his hubris and then panic before engagement with the enemy, his discombobulation during the first and latter battles, his cowardice, his rehabilitation (to some extent), his maturation thereupon and his achievements in latter and final battles. We go through all these sequential mental states listening to the mind of our young soldier, Henry Fleming, “the youth,” as told through a third party describing for us the youth’s mental thinking's. The analysis is nothing less than extraordinary.

The book is often set reading in middle school teachings. It provides insightful understanding of the difficulty of marching onto a battlefield. The book may be very true to life. What is peculiar though is that the author is reported to have said the following concerning the fact that he was never in battle and was born six years after the Civil War ended: "Of course, I have never been in a battle, but I believe that I got my sense of the rage of conflict on the football field, or else fighting is a hereditary instinct, and I wrote intuitively; for the Cranes were a family of fighters in the old days". Wikipedia, last visited August 15, 2015, at n. 23 therein.

Notwithstanding Crane’s situation in life, the study is magnificent, and representative of a very likely mental process shared by many before entering battle. The Red Badge of Courage should not be overlooked as an essential read.

“It was not well to drive men into final corners; at those moments they could all develop teeth and claws.”
― Stephen Crane, The Red Badge of Courage

Probably 3.5 stars. Bonus points for the fact that Crane elevated war novels to a more modern level, but doesn't quite measure up quite to Conrad, Tolstoy or Remarque. Maybe 4 stars as a novel and 3 stars as a war novel.

Beautifully written story of a youth coming of age in a terrible war. Not only is he wrestling with who he is (no thanks to his parents) but he's having to do it in the middle of a horrendous war being fought, at that point, by full-grown men. He wants to prove himself but also live to tell about it. The best part though - the performance.

I have been trying to read this story since it was assigned to me for a book report over 30 years ago. The narrator did a great job bringing the story to life.

A classic that deserves to be called a classic

This is one of those books we read in H.S. because it was assigned. But it's a classics that needs a measure of maturity to truly appreciate. The story brings to life the experience of the Civil War for the common soldier. The writing is so excellent I replayed several of the chapters just to enjoy the wording. Excellent!

Some parts were hard to understand, but the voices provided by the narrator were great. Very interesting to peer intro the mind of a Union soldier during the civil war battles

I like listening to books but historical Fiction is usually not the move. Red Badge is pretty good wouldn’t listen to it again but I don’t regret listening to it. 🤷🏼‍♂️

Stephen Crane's tale went at a swift pace. The frantic pace of the story carried the war feel it was reporting on brilliantly. Truly beautiful

This Civil War story was not our favorite but did make us think about the terms "courage", "sacrifice" & "bravery" on deeper levels. We are a homeschooling family & this story was used as a comparison to the story "Johnny Tremain", which was set in Revolutionary War times, in a persuasive paper my son is writing in his 9th grade English class. We loved the narrator, Anthony Heald, as he brought life and flavor to the text. We would recommend this as a good snapshot of a Civil War battlefront.