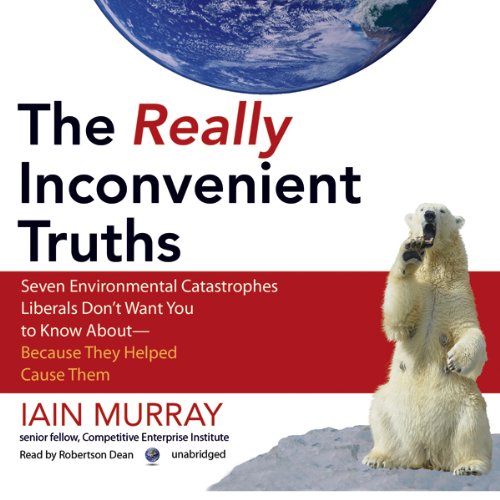 Did you know that pollutants and estrogen from contraceptives are causing male fish in America to develop female sex organs? Or that ethanol, the liberals' favorite fuel, is destroying the world's rainforests? We hear about AIDS in Africa, but the number-one killer of children in Africa is malaria, and guess who banned the pesticide that used to have malaria under control?

Iain Murray's exposé reveals how environmental blowhards actually do more to waste energy, endanger species, and kill people than those they finger, while capitalism, hunting, and old-fashioned property rights have made the planet better.

Rather than just myth busting and blame shifting, Murray offers applicable and effective solutions for each catastrophe - something the Left has yet to do.

I remember watching Al Gore’s, “An Inconvenient Truth” and immediately afterwards being fairly upset. But as I had time to digest the messages of the movie, research the science a bit and think through it’s claims, the focus of my annoyance has changed. This book confirmed my suspicions that environmentalism has become the religion of choice for many and a powerful tool for proponents of fascism.

I agreed with the author of this book on most of his points, especially with regard to individual property rights and the natural stewardship that should logically follow having an vested interest in one’s own land / home. On a number of other points I was educated. All in all, this was a worthwhile read.

If you believe the world can be nicely divided into black and white, good and bad, left and right, etc. and see the world through stereotypes, then this book is for you. If you believe the world is full of shades of grey and complicated by nuance, then this book will disappoint. Further, by choosing to write a book essentially in response to Al Gore’s 2006 “Inconvenient Truth” documentary, the author set himself up to create material that would quickly feel dated; complaining about Al Gore in 2015 seems irrelevant and even pithy.

But the problems with this book are much deeper than it feeling anachronistic (especially in light of the fact that the case for manmade climate change is even stronger now). The crux of a large part of this book works like this:

Thus, the author creates a classic strawman argument: show that Gore is wrong and you’ve shown the environmental movement is wrong. Of course, the author seems completely unaware that Gore is by no means the leader of any environmental movement. He created a movie that inspired people, but how does that make him the representative for an entire movement which can include the extreme protestors of Greenpeace to those running Benefit Corporations who believe in capitalism *and* protecting the planet to those running non-profits like the Nature Conservancy which uses the concept of private property to protect land?

And don’t get me wrong: even though I consider myself what the author would call a “liberal environmentalist”, I’m happy to have my beliefs questioned and then updated as needed, so I was excited to listen to this book and learn something new. But you can’t convince rational people of a differing viewpoint when you are focused not on objectivity but language that is couched in political rhetoric and a half-baked understanding of how science works.

And this is what’s most maddening about this book: how the author completely twists science around by cherry-picking studies. The classic example is climate change: even though 97% of climate scientists are in agreement that manmade climate change is real, this author has no problem making climate change sound like it’s an unclear issue at best. When he gets into subsidizes for renewable energy, its unbelievable that he completely ignores the much greater subsidizes that are and have been provided to fossil fuel energy for many decades. Or when he claims that the Endangered Species Act is a failure since only a handful of species have been removed from the list when the primary goal of the act is in fact to prevent them from going extinct, a goal which it has done phenomenally well at.

Even when the author has some good points (which are few), e.g. that corn ethanol is a bad idea, he manages to twist it around and blame “liberal environmentalists” even though most environmentalists agree it is a bad idea and in fact it was the administration of George W. Bush that created our current program.

In the end, the author thinks that making everything private property will solve all our environmental problems. There is no acceptance that private property and government are both integral to our lives and it’s absurd to think that all of one and none of the other will ever be a legitimate solution. But alas, it’s much more simplistic to just pigeon-hole everyone into either a “central planner” or a “capitalist”. So if that’s how you like your worldview, then I’ll say it again: this book is for you.

Well it is good to hear a different take on issues that are impacting our lives today this author makes jumps and uses faulty logic far too often for this to be truly informative. This is more of a starting place to knowledge rather than somewhere to hang your hat.

Too right wing in his politics.

If the author would have acted in a unbiased manner he could have scored more points.

He makes too many statements that simply cater to the right wing of the political spectrum.

So basically in turns into a book about right against left and not as much about the subjects itself.

Although it's read like a dry boring lecture with no humor to break it's mundane delivery. The information should open your eyes and mind to what the left has been doing for decades. The lies we've been subjected to by the indoctrination from our first day's in school to believe we are damaging the environment and can do things to change the climate is absurd. As Stuarts of the planet the leftist environmentalist are total failures that have caused more harm than helped anyone.

it good to hear the other side

What did you love best about The Really Inconvenient Truths?

What other book might you compare The Really Inconvenient Truths to and why?

What does Robertson Dean bring to the story that you wouldn’t experience if you just read the book?

I like to educate myself by challenging my own beliefs. AND I have been a skeptic of environmentalists for a few years. This book has taken me to a new place. I would recommend it highly.

This was an Interesting book.

This was an Interesting book. It makes me want to explore these topic areas in more depth.

A must read for everyone who loves the environment

Excellent. Still as relevant today as when written. We still haven't silenced the anti-humanity of Liberal environmentalists.