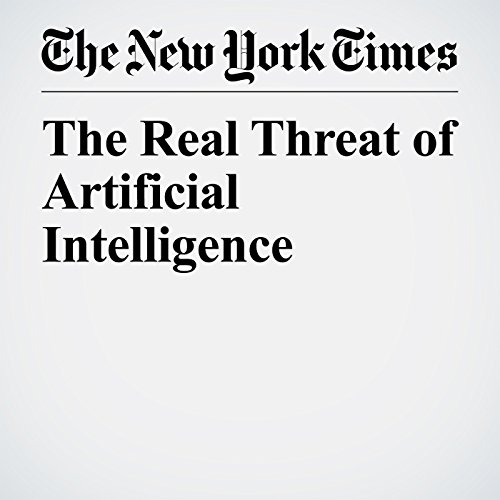 What worries you about the coming world of artificial intelligence?Too often the answer to this question resembles the plot of a sci-fi thriller. People worry that developments in AI will bring about the “singularity” — that point in history when AI surpasses human intelligence, leading to an unimaginable revolution in human affairs. Or they wonder whether instead of our controlling artificial intelligence, it will control us, turning us, in effect, into cyborgs.

"The Real Threat of Artificial Intelligence" is from the June 23, 2017 Opinion section of The New York Times. It was written by Kai-Fu Lee and narrated by Kristi Burns.

I recently added Kai-Fu Lee’s book “AI Superpowers: China, Silicon Valley, and the New World Order” to my reading list on Audible. I noted on Audible a free short article listed from The New York Times entitled “The Real Threat of Artificial Intelligence” by Kai-Fu Lee. I just finished reading it and it was much different than what I expected. I was expecting some scary projection about what happens when singularity is reached. Kai-Fu Lee projects this hypothetical event to happen hundreds of years from now, if ever.

The author outlined the coming changes over the next few decades such as what industry jobs are at the most risk of being lost to smart machines, such as in transportation, agriculture, manufacturing, banking and financial. He stated that AI’s have difficulty in creativity, social interaction and compassion. Jobs that require creativity, social interaction and compassion should maintain jobs, albeit, they will probably be changed in many ways. Kai-Fu Lee claimed that this will result in more wealth in fewer hands and enormous unemployment.

Governments will also have to plan for the future looking at the education area because taxes will be decreased with the massive amount of unemployed people unless government and society is successful in making a planned and comprehensive movement of people into new jobs.

On a larger scale think about countries that buy AI’s from a country and are dependent on that country for upgrades and maintenance, etc. Also think of the profits a company can generate if it has significantly reduced wages from human labor. We are entering into the second major industrial revolution. The world is changing dramatically.

I cannot wait to read his book. It is 9 minutes long. Kristi Burns does a good job narrating the article.