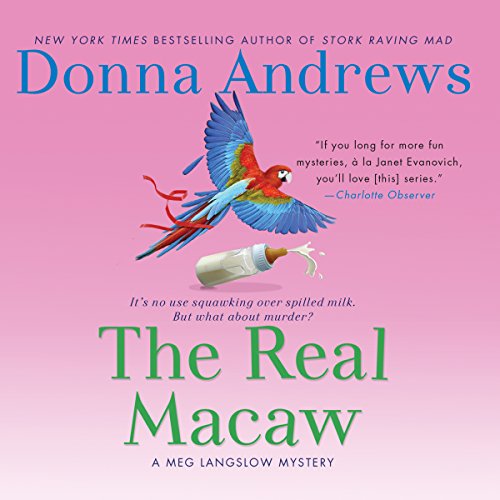 During an early morning feeding for her four-month-old twins, Meg Langslow hears an odd noise and goes downstairs to find her living room filled with dozens of animals - cats, dogs, hamsters, gerbils, rabbits, guinea pigs, and a stunningly foul-mouthed macaw. She soon learns that financial woes have caused the local animal shelter to repeal its no-kill policy. Her kind-hearted father, her zoologist grandfather, and other like-minded citizens have stolen all the shelter animals, both as a gesture of protest and to protect them until the hated policy can be repealed.

But the volunteer who was transporting animals to new homes has been murdered. Was it the victim's tangled love life that drove someone to murder? Or the dark secrets behind local politics? And will Meg ever succeed in finding homes for all the animals that have landed in her life?

Love all her books. This one didn’t disappoint. I laughed out loud. Get this one for sure.

Meg and Michael only think that they are overbusy what with her looney family, infant twin boys, and the 5 year old son of the formerly underemployed coordinator of the drama dept who chose to join the military to finance her PhD. Then they are inundated by all of the animals of the county shelter when the volunteers try to rescue them but one of their number is murdered. Besides the animals and the murder, there is the uproar that begins when a pair of surveyors come in preparation for the building of a golf course and condos on their property! More madness ensues when it turns out that the mayor has taken out loans on the administration buildings but never made the payments, and now the bank is demanding evacuation and the whole town comes out in force to move everything out. Through it all, there is plenty of laughter to be had!

Donna Andrews is getting even better at this!

Since the last Meg Langslow mystery, Book 12, STORK RAVING MAD, Meg had her twin babies, boys Josh and Jamie. Meg is feeding them one evening when they are 4 months old, and she begins to hear animal noises. She trecks down the stairs in her and her husband Michael’s large Victorian home, only to spy her father, her grandfather, and her brother shepherding in all sorts of cats, dogs, gerbils, guinea pigs, birds, and one macaw with quite the vocabulary into her living room! They explain that with the dire financial straits the town of Caerphilly, Virginia has gotten itself into, the shelter has had its no-kill policy rescinded. In order to save all the animals, the men of the Langslow branch of the family joined forces with the Corsicans (Committee Opposed to the Ruthless Slaughter of Innocent Captive Animals) to save them all. The original plan was to have Parker Blair pick everyone up and then deliver to various people who volunteered to foster them. But Parker never showed up. Meg keeps calling his cell phone to make sure he’s OK, and Chief Burke arrives, holding Parker’s phone and asks Meg why she keeps calling a dead man.

Meg doesn’t need more residents in her home, so she insists that all the animals be moved to the barn. However, her brother Rob has a team of testers from his computer gaming company testing a new game in the barn. The Corsicans hold their meetings in the barn as well, with many of the animals being adopted on the spot. Even Rob falls in love with a particular dog.

Rumors fly about who might have killed Parker, since he had many girlfriends in town, some wildly jealous of each other. Rumors are also flying that the mayor has mortgaged the town, and a development company will seize the property of several citizens including Meg and Michael, Meg’s father, and others, in order to construct a golf course that would profit the town. First, however, comes the solving of the murder and burying Parker. His closest friend needs help finding the best clothes to bury Parker in and enlists Meg’s help. While Meg is ostensibly looking for clothes, she searches Parker’s home and files. Meg discovers that Parker has proof of what the Mayor has done to the town!

While rumors fly, confirmation comes next, and chaos reigns, as always. Donna Andrews can make all the mayhem seem like it’s supposed to happen in the Langslow home and spill in Caerphilly while treating us to many laugh-out-loud moments as we watch. The murder is solved, but not in any way suspected at the outset of this caper. Plotting was enjoyable, steady, and not rushed. I think Donna Andrews is getting even better at this!

Another humorous trip with Meg Langslow

In <strong>The Real Macaw</strong> by Donna Andrews, Meg Langslow is dozing in the middle of the night with her four-month-old twin boys when she hears noises downstairs. Going to check on things, Meg finds herself surrounded by dozens of animals of all kinds. The worst is a macaw that swears like a pirate and soon learns to bark, howl, meow, and growl like the other animals. It seems that the county is about to euthanize all the animals in order to save money, so Meg's grandfather, a world-famous zoologist, and other animal lovers have staged a raid to rescue the animals. However, the man with the truck, Parker Blair, never showed up, so the group brought the animals to Meg's house. But then Chief Burke shows up at the house to ask why Meg has been calling a dead man. Parker Blair has been murdered.

Soon the situation becomes much more dire, as Meg learns that the mayor has taken out mortgages to do "improvements" on the town of Caerphilly, using county property as collateral. But the payments are long overdue, and the lender is planning to repossess county buildings on Monday. The lender is also in the process of trying to force the county to use public domain to take the farms of locals, including Meg and Michael's home, in order to develop into high priced condos and shopping centers. And why has someone suddenly switched out a nice, tame macaw for the foul-mouthed one they first brought?

I was excited when I saw that the last book in the gap in audio editions of the Meg Langslow books was being filled (though books 1-3 are still not on audio), and I was not disappointed. I was really pleased to get to see what events led to those of <em>Some Like It Hawk</em> and enjoyed the angle of getting to connect with the community of Caerphilly, whom we see coming together to support their city. I also enjoyed seeing Meg and Michael as they have now become parents. I appreciated the way Michael takes such an active role as a father. While Meg does make a point to care for her kids, Michael does as much childcare as Meg, showing how a father can be deeply involved in his children's lives as well as the mother. Meg is fortunate to have an extended family nearby who helps out a lot with the babies.

I really enjoyed the creative plot of this book. The whole storyline of a murder's taking place amid the repossession of a town's buildings is a creative touch. <strong>The Real Macaw</strong> has many different angles to the plot. We wonder whether the murder is personal or related to the betrayal of the city by the mayor and his cronies. The macaw also plays a role in the case, which I appreciate, since a series of titles that use puns of a bird's name could easily lose steam. But the "real macaw" actually helps to solve the murder.

I highly enjoy the unique characters in this book. Each one is personalized and fun, and some of the family members contain such crazy features. The animals also contain fun natures, whether talking about the 8 1/2 furball Spike, who is the vicious one, or the gentle giant wolfhound Tinkerbell, the border collie who keeps herding all the neighbor sheep and their own llamas into the barn, or "the real macaw." Each character in the book is so alive that I just close my eyes and picture him or her, which thoroughly adds to the joy of listening to the book.

I greatly enjoy the narration of Bernadette Dunne in this whole series, and <strong>The Real Macaw</strong> is no exception. She makes creative voices for each of her characters, and she does this so well that I don't even need to be told who is speaking in order to recognize the speaker. I love that she told a group of us in an online live chat recently that she modeled her voice for Meg's father after her own grandfather. He sounds elderly but active, inquisitive, and a little eccentric on top of that, suiting the character of Dr. Langslow perfectly. Besides her incredible voices for the characters, Dunne does a great job of expressing herself ably without overdoing the excitement, a trap which this series could easily cause a narrator to fall into.

I had a great time listening to <strong>The Real Macaw</strong>. The book is clever and highly humorous. But further than in just the humor, it shows its cleverness in a strong plot that wraps up, as in all of Andrews's books, with a wild confrontation with the murderer. I recommend this series to people all the time, especially those who are new to audiobooks. This book, like every other book in the series, deserves five stars!

I have enjoyed all of the Meg Langslow series and am really hoping Audible will complete the series with the 3 titles that aren't yet available (especially Murder with Peacocks).