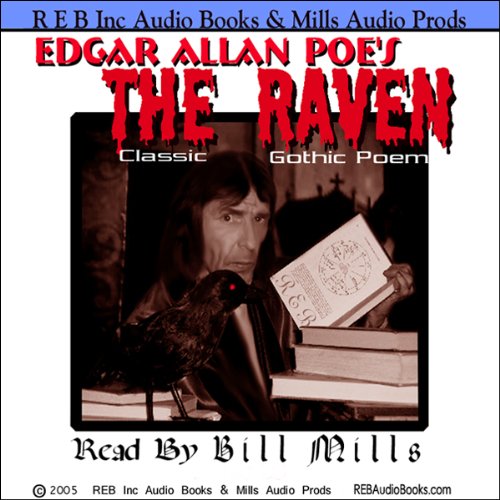 In this wholly original reading/performance of the immortal Edgar Allan Poe's most famous poem, actor/performer Bill Mills goes beyond the stereotypical rhythmic rendition, intoned in a sepulchral voice, and instead presents Poe's words as the increasingly deranged dialogue of a man with a visitant he comes to see as an omen. It is an omen that neither in this life or the next shall he possess the one woman he loves beyond all reason.

Produced in honor of the anniversary of the death of this legendary author and poet, the performance is enhanced with evocative music and sound effects and is preceded by an introductory tribute and Poe mini-biography written by producer and performer Bill Mills.

Great reading, but the Intro was unneeded

I almost felt compelled to dock one star from the rating because of the long and, in my opinion, unnecessary bio of the author that takes up the first third of the recording. A short opening bio might have been useful (maybe 2 minutes), but this went on for way too long.

So, 5 stars for the Raven, but consider skipping the intro.

i have heard better performances

Would you consider the audio edition of The Raven to be better than the print version?

depending on the performance of it there is one i sadly bought on itunes that you have....but is a better performance than this one. I did like some of the history of Poe given in this one.

What was one of the most memorable moments of The Raven?

His descent into madness

Yes...you have to sit through it, it's climax is so awesome!!

The Raven should be considered if not the greatest poem, one of them. How Poe can access the dread we have of the death of a love one and lay it so plain...it is simply terrifying and beautiful at the same time

A good performance and a well delivered piece. I bought it as its my girlfriends fav poem and this didn't disapoint