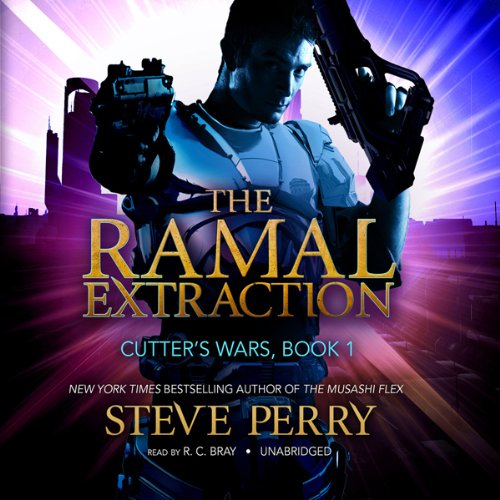 At the close of the 24th century, a series of revolutions has caused the galaxy to descend into chaos. With the Galactic Union’s army stretched thin, mercenary units have arisen for those who have the need - and the means - to hire them.

Captained by former Detached Guerrilla Forces Colonel R. A. "Rags" Cutter, the Cutter Force Initiative is one of the best. A specialized team consisting of both aliens and humans, the Cutters offer services ranging from combat training and protection to extraction and assassination - as long as the target deserves it and their employer makes good on payday.

When they're hired to find and rescue Indira, the soon-to-be-married daughter of Rajah Ramal of New Mumbai, the team's first task is to identify the kidnapper. The obvious suspects are insurgents who want to overthrow the rajahnate, but as other forces enter the game and an assassination attempt is made on Ramal, the Cutters realize that their in-and-out extraction job is about to get a lot more interesting - and a lot more lethal.

Steve Perry is a New York Times best-selling author who has collaborated on novels in Tom Clancy’s Net Force series. A recipient of the Willamette Writers Lifetime Achievement Award, he also won an Emmy for his work on Batman: The Animated Series.

If you were looking for entertainment, get ready for a whole book of identity politics shoved down your throat. Another cookie cutter woke story, men stupid and bad, women prefect and strong. Which is weird because one would think that a military sci-fi novel’s target demographic would be men, guess they don’t like money.

Not even the great R.C. Bray could save this hot garbage. This is just the worst.

It felt as if the writer was being paid by the word....

It was slow moving and not very cohesive....

There was so much potential....but the writer seemed to have a very skeletal plotline/idea - but seemed unable to flesh that out. More words doesn't improve a story.

It wont let me submit a review without typing something in this block but really all that needs to be said is its bad.

What disappointed you about The Ramal Extraction?

The folks in this book just do a bunch of random shit. Apparently, they are all badasses, but I feel bad for the guy whose daughter has been kidnapped because this team just does a lot of aimless activities that don’t seem to get them any closer to the goal. Sherlock, they are not.

R. C. Bray, he does an excellent job as a narrator. He has developed a unique voice for each person in the story.

Characters. Did not follow plot to well but seemed pretty good. Will listen to the rest of the series!

I enjoyed the story generally with great hand to hand and firefight scenes. Yet I felt the bigger picture hints were under thought through and the hooks for the next books was clunky.
I admit to being a fan of RC Bray narrating first person action stories and I think the performance helped lift the tale overall - BUT - RC - please please please do not attempt Australian or New Zealand accents, also for Australian and New Zealand place names, google the pronounciation, particularly the Te Reo Maori & NZ place names.

A pretty good story if you stick with it.

I didn't love it, but the characters are interesting enough to keep you in the story. I thought my ears would bleed with all the gender neutral junk. If you can't stomach that move on... but otherwise it's not terrible!

If you want something simple without lots of baggage and mind wobbling details, this is definitely for you.
And despite it's simplicity the story is very good.

How does this have 4+ stars?!?! Terrible

I am so tired of being preached to by my entertainment. Just tell a story and do it well.

This is a thin story, filtered through 8-tons of “woke” garbage. The language is clunky and the story hard to track, due to the extreme overuse of pronouns. The author needs to go back to high school English class.

The author is obviously pandering to some “othered” class he feels needs represented, but does it so awkwardly that the book comes out garbage.

I’ve enjoyed many books with diversity and inclusion for LGBT+. This author makes a weak and ridiculous attempt at appeasement to those persons, and it’s gross.

A bit of a gem here

More twists than an Alpine road, the book started off very well, with an excellent storyline.
the team seemed to get too good towards the end and lost some credibility, just wasn't necessary. Will be looking for more from this author. wonderfully read by RC Bray

Very clever and engaging. Yeah I only got because I'm a R. C. Bray fan, but story is really interesting. Most space opera's thave may Alien species, but really like the Vastalimi, Kay especially. But the but Rags whole team are fun to follow.

I gave up on this after a couple of chapters. It was just the same as the other mil sci-fi on Audible which I mostly dislike.

Characters appear to be getting their own personalities which is nice and all together a good listen, I will be listening to the next episode shortly.

Thoroughly enjoyed the book some twists and humour. Narrator as always brilliant. Recommend this to anyone.