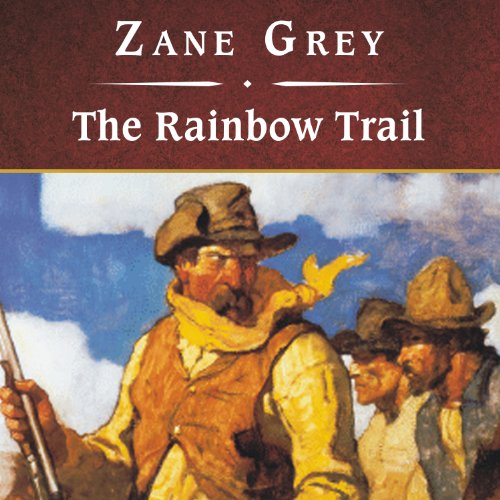 "Somewhere northward in the broken fastnesses lay hidden a valley walled in from the world. Would they be there, those lost fugitives whose story had thrilled him? After twelve years would she be alive, a child grown to womanhood in the solitude of a beautiful canyon? Incredible! Yet he believed his friend's story and he indeed knew how strange and tragic life was. He fancied he heard her voice on the sweeping wind. She called to him, haunted him. He admitted the improbability of her existence, but lost nothing of the persistent intangible hope that drove him."

A beautiful rainbow filled with mystery and promise prompts John Shefford's singular journey beyond the Utah upland into a wild canyon laden with a haunting secret. But to reach it, Shefford has to go through a Mormon village, where trespassing means death, and confront a treacherous outlaw who blocks the way.

The sequel to Zane Grey’s wildly popular Riders of the Purple Sage, this frontier story picks up where its predecessor left off, offering a pointed discussion of polygamy and women’s roles within the Mormon community. Nevertheless, The Rainbow Trail remains, at its heart, a larger-than-life Western romance, featuring courageous cowboys, action-packed gun fights, and daring jail breaks. From Star Wars to The Adventures of Huckleberry Finn, performer Michael Prichard has voiced thousands of characters over the course of his career, and his knack for roleplaying is evident here as he trots out his downhome Western drawl, breathing life into this colorful cast of wranglers, outlaws, and early settlers of the Wild West.

A great epic western from the master Zane Grey

If you are a lover of Historical Fiction as I am I would highly recommend this title. Great plot and character development. Plus it answers questions you may have had after Riders of the Purple Sage. Michael Prichard is great. One ofthe few titles I have chosen to give 5*.

terrible, obviously Zane had a hatred for a certain religion, the man should be ashamed of himself.

No where ne’er as good as Riders of the Purple Sage. I was disappointed. The story droned on and on about the scenery. Too much fluff.

Good sequel that stands on it’s own merits

Good follow up to Riders of the Purple Sage. In terms of pacing I think I preferred this novel just a tad. Classic western storytelling combined with a nice mix of action, adventure, tension, and romance.

The narration was superb! Visiting an old friend from my youth. Thank you very much!

A dream like story to an exciting adventure of Riders of the Purple Sage. The characters in the story are enliven by their faith and beliefs. They are guided instinctively by a spirit that binds them all in fulfilling their life destiny.