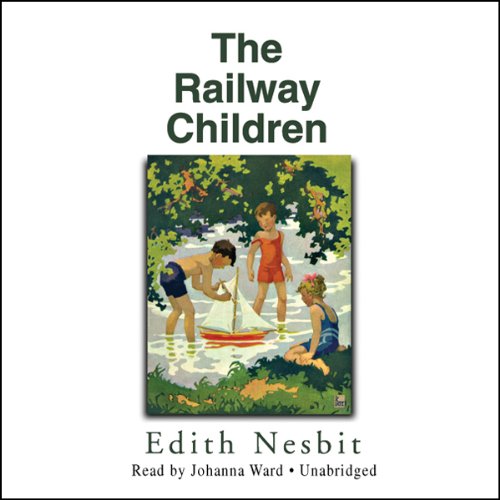 Roberta, Peter, and Phyllis were quite happy living in their ordinary red-brick house located in the suburbs. But when their father was called away, the children and their mother were compelled to move to a dark, shabby cottage in the country, and their lives changed more then they ever could have imagined.

At first the country seemed lonely and dull. Then one afternoon, a walk led them to a railway tunnel. There they met Perks, the porter, made friends with the kind Station Master, and waved to the Green Dragon train as it went by. Soon every day became filled with the excitement and fascination of the railway, and they became railway children.

Since its first publication in 1906, The Railway Children has been one of the most popular and beloved children's books, and it is sure to charm many generations to come.

Public Domain (P)1993 Blackstone Audio, Inc.
"Nesbit's vivid writing has a freshness that has the potential to make this a pleasurable listening experience for youngsters." ( School Library Journal)

The best story ever!!! I loved it.

The narrator was great and the story took me on an amazing adventure. Cool as.

This story is thoroughly engaging and a delight to hear. The narration is not bad but the characters could be brought to life a little more. But, a worthwhile listen.

Funny, sad and touching all at once

This is such a beautiful story and Edith Nesbit has that rare talent among adults of remembering what it is like to be a child. I read this story countless times as a child and still love it, so I downloaded it mostly for nostalgia's sake. I'm so glad I did as I can now relate to the adult characters in the same way as I related to Bobby as a young girl.

If I had one criticism it would be that Nesbit uses the Victorian convention of speaking directly to the reader as the author, and for example announces at the beginning of the last chapter that it will be the last. But I doubt any children listening would notice or care about that.

Johanna Ward's narration is superb. I especially love the voice she uses for Phyllis which is suitably endearing for such an endearing character.