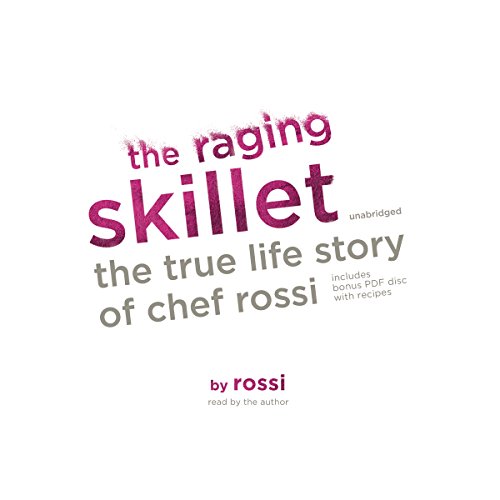 An outsider within her Jersey Shore family, Chef Rossi finds a home for her punk sensibilities inside the kitchen.

When their high-school-age, punk, runaway daughter is found hosting a Jersey Shore hotel party, Rossi's parents feel they have no other choice: They ship her off to live with a Hasidic rabbi in Crown Heights, Brooklyn. Within the confines of this restrictive culture, Rossi's big-city dreams take root. Once she makes her way to Manhattan, Rossi's passion for cooking, which first began as a revolt against the microwave, becomes her life mission.

The Raging Skillet is one woman's story of cooking her way through some of the most unlikely kitchens in New York City - at a "beach" in Tribeca, an East Village supper club, and a makeshift grill at Ground Zero in the days immediately following 9/11. Forever writing her own rules, Rossi ends up becoming the owner of one of the most sought-after catering companies in the city.

This heartfelt, gritty, and hilarious memoir shows us how the creativity of the kitchen allows us to give a nod to where we come from while simultaneously expressing everything that we are.

3.5 stars. I would call this a memoir light. Got a sense of Rossi's years growing up in an Orthodoxish household on the Jersey shore, her rebellion, and subsequent success as an NYC caterer. Rossi had a great voice for the narration of the audiobook and she definitely sounded like it would be incredibly fun to have her as a friend. But unlike the really great memoirs, Rossi steered clear of the vulnerability that would have made it meaningful. For someone who was able to take such great risks in her life, Rossi wasn't able to take the emotional risks needed to give this book depth.