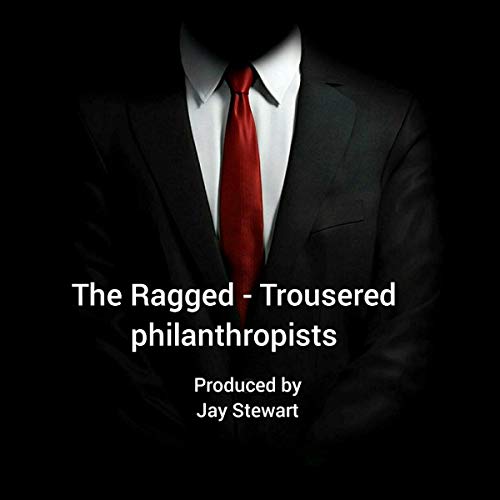 The Ragged-Trousered Philanthropists chronicles the tale of Frank Owen, a traveling socialist visionary making his way from town to town in the name of the socialist revolution. When spring arrives, Frank Owen decides to settle in the quiet town of Mugsborough, and joins a group of workmen who are painting the home of a wealthy neighborhood resident. Owen is quickly befriended by two fellow workmen: Bodgit and Scarpy. Scarpy is thin and nearly emaciated. When the men break for lunch Scarpy never has much to eat; only a bit of bread, or a biscuit and tea. Owen inquires as to why he's so thin and undernourished. Bodgit explains that his pay has been severely cut, and he barely has enough to feed his wife and three growing children at home.

This is not a book but a narrator review. Mr Galloway clearly has no experience or training in this field and it showed. I was unable to listen to this audio book as Mr Galloway’s volume would go from one extreme (shouting) to the other (whispering and mumbling), often without apparent reason. I found my hand permanently shooting to the volume dial, however this was not very practical during driving. I found the experience of listening to Mr Galloway’s narration incredibly infuriating.

Despite a few recording errors which are to be expected from the age it is a fantastic read. Humerous, emotional and entertaining, as well as thought provoking and educational. Even more than a century on there are innumerable parrallels that can still be drawn, especially in our current political climate.

A prescient reminder of what was and may be again

A well delivered telling of the classic story. Galloway honest in his interpretation. A good version not without a couple of recording blips but believable and delivered with honesty and a passion obviously derived from a love of the subject matter.

Great story but terrible editing and a bad narrator

The story is wonderful and pulls you in despite the terrible narration and rubbish editing (what appears to have been corrections are left in alongside the original narration) .

A triumph of political and social 'noire'.

What a superb rendering of the 'state of man' let alone the state of the nation or the world.
Truly a masterpiece of ingenuity and a brilliant and lucid depiction of the struggles and (self inflicted) ignorance of the working man.
I think this book should be on the reading list of every 1st year university student.

The production of this book is terrible.

A great story which many in today's society should listen to. Completely let down by Galloway's reading and a disastrous production.

Absolutely terrible narration. I gave up.

p.s. Like the narrator, I am Scottish. It's not the accent that's the problem.

If you've found this book, out is likely you have a good idea about its subject. The book delivers an easily relatable story of hardship and prosperity, based in Victorian times but it's equally applicable today, to discuss socialism. Reading this in October 2019, even at the end of the first chapter, I found many issues raised that I see and have seen happening over the last 9 years in startling severity.

I really can't get on with George Galloway's narration though - and it's nothing to do with his event! He delivers this without punctuation, blending one sentence into the next without even a breath. There's no clarity as to when someone starts or ends talking, or when he's reading narration, and by chapter 5 I can't continue due to this, and the constant mistakes, which in places make what he's saying incomprehensible. This version is going back for a refund, but I'm going to get the other unabridged version which is read by someone else completely. By the way, don't even think of an abridged version of this book. I believe you'll miss far too much to take in all that Tressell had to say.

There is one good thing about Galloway (in this recording at least, anything else I'll leave for your own judgement) which is his preface. He gives a nice bit of background to the boom and the author, and explains how it shaped his political ideas from an early age.