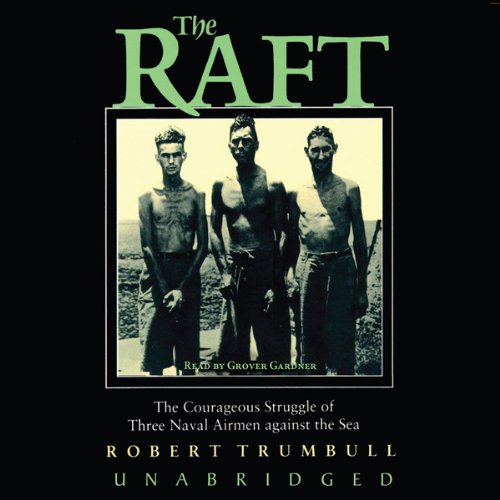 On the afternoon of January 16, 1942, three men boarded a TBD Devastator aircraft - a low-wing, single-engine torpedo-bomber - for an antisubmarine patrol flight. Although it was to be a relatively short flight, they became lost. When the fuel ran low, they decided to ditch into the Pacific. Before they could get their life raft to inflate, however, the plane sank beneath them, carrying most of the survival gear down with it. Thirty-four days later the raft landed on Puka Puka, a New Zealand-governed atoll in the Danger Islands, having meandered 1,200 miles!

The story of the voyage, with few resources except courage and indomitable human spirit, is not only an inspiring listen, but a tribute to the human species and its will to survive. The miraculous escapes, especially the passage over a killer reef and the reaching of safety only a day ahead of a typhoon, also suggest that someone was looking over them.

Great for all ages!

Our family took this audiobook with us on vacation last year and listened as we drove. The whole family enjoyed the book. Hard to believe men could live on the sea that long without supplies. Well worth listening to!

this survival story is incredible and compelling

Three Navy men go down in a plane in the Pacific. It is near the beginning of WWII. They survive 34 days in a raft and lived to tell their remarkable tale. This book (except forward and afterward) was written while the war still raged on so the men weren't allowed to talk about exactly where they went.

This is an Audible Kid's production, which I didn't realize when I bought this. It's an excellent book, except it seems like glossed over war propaganda and therefore I gave it 4 stars. It would be great for kids learning about WWII, maybe fourth grade and above because it doesn't contain the strong language that these men may have spoken.

I listened to this as part of my Summer Reading Around the World and I've got just one more book to go. It's been fun.

An inspiring story of human endurance

The author tells this inspiring story in an uncluttered, matter of fact way yet still fully conveys the physical, mental and emotional hardships endured by the survivors.

A great story of survival

I originally read this story as a Scholastic Book, 50+ years ago. A great story of hardship, courage endurance and ingenuity. I highly recommend it.

I read this book many years ago and throughly enjoyed it! Great listening and highly recommended. Thank you Audible for the freebie 😋

So worth the listen

I love a good survival story and this one didn’t disappoint. Short, but not too short. I felt that every thing that should have been covered, was.
The story was from the point of view of only one participant. I’d like to see if either of the other men in the raft wrote a book or did any interviews. It would be good to hear the story from another angle.

Inspired by the actual raft

While visiting the NAS museum in my hometown of Pensacola, I was inspired to read this book having seen the display of the raft and pocket contents of the airmen.
A poignant story of bravery and determination.

loved this detailed piece of history. we listened as we traveled for 2 days, and passed time.

Listened to on a family road trip with my kids. It was a great way to pass the time on a long trip.

I didn't plan to but I ended up listening to this straight through astonished at the privations that the crew survived.

It is well narrated and would make great listening for a family group.

What surprises me me most is that I had not heard of this before. I would have thought Hollywood would snap up a story like this. Especially as being Americans they would not have to change their nationality.

A must listen book!