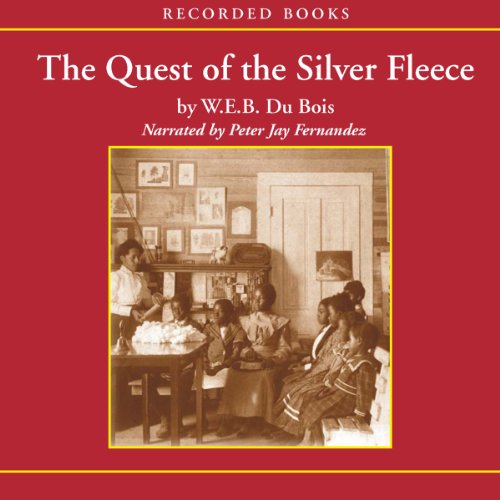 W.E.B. DuBois, one of the most influential African- Americans of the 20th century, made significant societal contributions as a teacher, writer, and founding director of the NAACP. The Quest of the Silver Fleece reflects the attitudes and mindset of Americans - Northerners and Southerners, rich and poor, black and white - at the dawn of the century.

The Silver Fleece, cotton, could be the answer to Zora and Bles' prayers in overcoming poverty. While attending Miss Smith's School in rural Alabama, they lovingly nurture their crop. But, the white aristocracy is determined to control the price of cotton and monopolize the market. Can two young lovers prevail despite the daunting obstacles laid before them?

What made the experience of listening to The Quest of the Silver Fleece the most enjoyable?

Du Bois' writing made my experience of listening to The Quest of the Silver Fleece most enjoyable. Several years before he wrote this book, he wrote a government report documenting that slavery still existed in the South in 1903, forty years after the emancipation of the slaves. Bureaucrats deemed his report too controversial and refused to publish it or return it to him. Instead, they destroyed it. Three years later, Du Bois wrote The Quest of the Silver Fleece by changing the names of the peoples in his report. When I listen to The Quest, I hear an air of veracity that makes me exclaim, "This man is not making this up. This happened." My greatest thrill was hearing how the world really worked at that time and ours.

My favorite character was Colonel Cresswell because he epitomized the Southern aristocracy that stopped at nothing to re-enslave African Americans. He was cold, calculated, and un-apologetically racist. His hatred of blacks and his greed for the money their cheap labor produced gave me chills.

My favorite scenes in the book were witnessing Washington, DC and all of the backroom deals and backstabbing. My favorite line was "Is there anything in Washington that the South does not own?" because Northern politicians bent over backwards to appease the South by sinking child labor laws, free trade bills, black political appointments, or anything that would antagonize Southern financial interests. I listened to the DC scenes and said, "That is how Washington works."

Who was the most memorable character of The Quest of the Silver Fleece and why?

Zora was the most memorable character of The Quest of the Silver Fleece. She had a character arc that began with her as a silly, thieving girl and ended with her as a powerful, nurturing woman. Colonel Cresswell remained the same and unrepentant until his deathbed expression of regret at the end. In Zora, however, I witnessed a woman grow and change in ways that were dynamic and universal. She was a larger than life woman who provided an Earth Mother counterpoint to Colonel Cresswell's rapaciousness. Also amazing is that a man, Du Bois, could write such a deep, insightful portrait of a woman.

The Quest of the Silver Fleece should be read along with Du Bois' Darkwater and The Souls of Black Folk. To find out more about the neo-slavery which thrived in the South after the Civil War, read the Pulitzer Prize-winning book Slavery by Another Name by Douglas A. Blackmon. All of these fine, provocative books are available on Audible.

What did you love best about The Quest of the Silver Fleece?

There is no sequel...I would have loved to see the next generation.

Each character found their way into my heart or became the objects of my disdain and those mattered were human enough to change and grow. He showed life is as it is not as we wish it but yet we have the capacity to change things with enough heart and courage. My interest definitely been revived in this subject matter. Our country should never forget the genesis of our racial struggles so that we do not repeat that evils of our past.

Have you listened to any of Peter Jay Fernandez’s other performances before? How does this one compare?

If you could take any character from The Quest of the Silver Fleece out to dinner, who would it be and why?

Du Bois is under read and under spoken of...