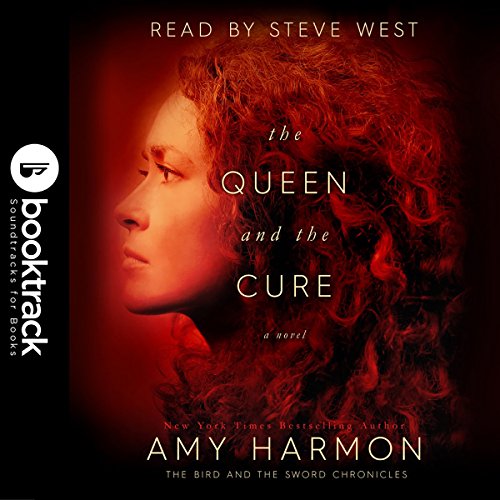 The Queen and the Cure: The Bird and the Sword Chronicles Series, Book 2: Booktrack Edition adds an immersive musical soundtrack to your audiobook listening experience!*

There will be a battle, and you will need to protect your heart.

Kjell of Jeru had always known who he was. He'd never envied his brother or wanted to be king. He was the bastard son of the late King Zoltev and a servant girl, and the ignominy of his birth had never bothered him. But there is more to this man than his parentage. More to this man than his blade, his size, or his skills, and all that Kjell once knew has shifted and changed. He is no longer simply Kjell of Jeru, a warrior defending the crown. Now he is a healer, one of the Gifted, and a man completely at odds with his power.

Called upon to rid the country of the last vestiges of the Volgar, Kjell stumbles upon a woman who has troubling glimpses of the future and no memory of the past. Armed with his unwanted gift and haunted by regret, Kjell becomes a reluctant savior, beset by old enemies and new expectations. With the woman by his side, Kjell embarks upon a journey where the greatest test may be finding the man she believes him to be.

Cosa pensano gli ascoltatori di The Queen and the Cure

I read the first book The Bird and the Sword And was blown away by the story. I love every bit of it and was so excited to read the next one. I loved Kell. His personality in the beginning was engaging and interesting. Slowly it started to unravel for me. I didn’t really get a lot from the main female character. She really didn’t do much and was solely a love interest which left more to me desired. I really liked the beginning and middle of the book, but the ending was so predictable. I called every single thing that happened. The love was there. The characters were there. However it was so tropey. I still love Amy’s writing. The way she writes is poetic and there are so many moments in this book that make me feel with the characters. I look forward to whatever else she has to write in this series. I just want the magic back from the first book. The narrator is fantastic and the music in the book is something I’ve not experienced. It’s a great accompaniment for the words in the story. This book is not the best follow up to the first but it was still well done and entertaining to read. I wouldn’t discourage anyone from continuing the series.

the queen and the cure

The author should kneel and thank Steve West for the fantastic and brilliant performance of Steve West.

The book by itself was outstanding...but this has to be one of the BEST audible books I have listened too. The narrator was outstanding and is now one of my new favorites. I loved the low notes of music and other sound bites in the background. A really great experience!!.

Never wanted it to end

A fantastic story with characters I grieved to say goodbye to at the end. Amy Harmon has amazed me again. Now I need a cure for my broken heart after finishing this book. Not because it's sad, but because I wanted it to go on and on.

Hmmmm not my favorite

It’s unusual to carry a villain into a sequel and I was so done with the changer Fieri. The music, too much, Sasha was the most uninteresting blasé character ever, weak and whiney. I guess you can say I didn’t really like this book. Narrator was good for this genre but not good female voices

The reading of this book was extremely dramatic as was the music accompaniment. I felt this took away from the story. I loved the first book and connected with the characters, even Kjell, but I struggled to connect with the characters and the storyline here. Again, maybe due to the dramatic reading.

A good continuance from the first book!

I really like the first book and I enjoyed how the author portrayed the characters. I could see this on the big screen someday perhaps. I enjoyed the second book although the music in the background threw me off a little bit I got used to it as time went on. I enjoyed the narrators voice but would have like to have a woman speak for the queen. I enjoyed the storyline and I hope you do too, worth reading.

Loved the book. The narrator was great. But the music in the background?!? Awful. It was so distracting.

I really enjoyed the story and journey of the characters. It’s really keep you on your toes. I struggled with the back ground music through out. I had read the first book on my kindle but need to switch to audio while on a road trip. I only kept listening to it because I could not wait to know how it ended. If I had been at home I would have returned the Audio version and just read it. Much more relaxing and engaging that way.

Great story and Steve West did his usual top notch narration. Love the combination of fantasy & romance. So much more enjoyable to listen to than The Bird & the Sword because the narration was so much better. I would highly recommend reading The Bird & the Sword, which had a wonderful story but was ruined for me by the narrator and listening to The Queen & the Cure. I really love Amy Harmon’s writing!!