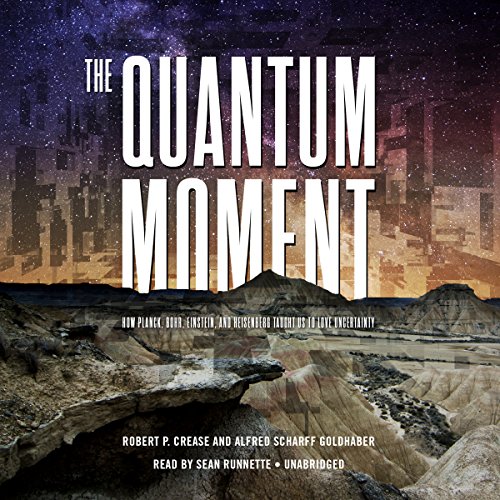 The fascinating story of how quantum mechanics went mainstream.

The discovery of the quantum - the idea, born in the early 1900s in a remote corner of physics, that energy comes in finite packets instead of infinitely divisible quantities - planted a rich set of metaphors in the popular imagination.

Quantum imagery and language now bombard us like an endless stream of photons. Phrases such as multiverse, quantum leap, alternate universe, the uncertainty principle, and Schrödinger's cat get reinvented continually in cartoons and movies, coffee mugs and T-shirts, and fiction and philosophy - phrases reinterpreted by each new generation of artists and writers.

Is a quantum leap big or small? How uncertain is the uncertainty principle? Is this barrage of quantum vocabulary pretentious and wacky or a fundamental shift in the way we think?

All of the above, say Robert P. Crease and Alfred Scharff Goldhaber in this groundbreaking book. The authors - one a philosopher, the other a physicist - draw on their training and six years of co-teaching to dramatize the quantum's rocky path from scientific theory to public understanding. Together, they and their students explored missteps, mistranslations, jokes, and gibberish in public discussions of the quantum. Their book explores the quantum's manifestations in everything from art and sculpture to the prose of John Updike and David Foster Wallace. The authors reveal the quantum's implications for knowledge, metaphor, intellectual exchange, and the contemporary world. Understanding and appreciating quantum language and imagery, and recognizing its misuse, is part of what it means to be an educated person today.

The result is acelebration of language at the interface of physics and culture, perfect for anyone drawn to the infinite variety of ideas.

The authors, one a philosopher the other a physicist draw on their training and six years of co-teaching to dramatize the quantum’s rocky path from scientific theory to public understanding. The book explores the quantum’s manifestation in everything from art and sculpture to the prose of John Updike. Understanding and appreciation the quantum language and imagery, and recognizing its misuse, is part of what is means to be an educated person today according to the authors.

The authors recount a series of historical moments that occurred during the development of quantum mechanics in order to demonstrate how quickly scientific language worked its way into the artistic world. The author’s vivid storytelling of Einstein’s theories of relativity to Heisenberg’s uncertainty principle to modern conception of causality. Crease and Goldhaber keep the discussion of these complex topics clear and fun to read. Pop culture took to the quantum cause with far more gusto than most physicists. Experimentalist Robert Milliken tried to kill the idea, but his lab results kept confirming it. It is fascinating that concepts imagined 100 years ago will influence the physical and intellectual spaces we inhabit in the future. Sean Runnette narrated the book.

I never fully grasped the impact and meaning of Plank's constant until this book.

A must read / listen.

What would have made The Quantum Moment better?

I wanted a straightforward book presenting quantum theory. I lost patience with this book that seemed intent on wordiness rather than presenting its topic.

The story an narration were fantastic. What I liked best was the equal parts of science, philosophy, history, and entertainment. This will be one my favorites for the year.

Learned a lot about quantum physics

I learned a lot more about quantum physics. But this book is more than about the science of quantum physics and the bios of the founders of the field. It also spends about half the book on social, philosophical, and artistic impacts of quantum physics. This might be interesting to some people, but a few pages rather than half a book on the topic would have suited me better.

I listen to science books about 5 times as I'm not able to put full attention on them when I'm listening -- driving, doing housework, etc. So, the last few times that I listened, I skipped the societal implications.

If your interest is primarily the science of quantum physics, this is not where to start. The science presentations are too concise for a beginner. However, I've read several books and watched endless numbers of Youtube videos on the subject. My math is not up to the level needed for quantum physics.

For me, the level of the book was about right -- only a few very simple equations. By careful, repeated listening, I picked up more understanding of the subject. I find that the more different videos I see, words I look up, and books that I read & listen to, the more understanding I gain.

It took me a while to get used to the narrator -- he has a style that I found a little distracting -- sort of sing-songy, but that doesn't quite capture it. He's a clear speaker though, and his voice is fine.

If you're a beginner, I'd start with Youtube videos, one after another, until you're somewhat oriented. Then, you might get "Dr. Quantum Presents the Real Creator, You!" -- also on Audible. It's by a quantum physicist though so informally presented that you might not think so. And it's got some philosophical viewpoints that you might not care for. But its presentation of quantum physics is a good place to start and it's pretty entertaining. There are probably lots of other good places to start as well.

Goes Over The Basics

Goes over the basic concepts of quantum mechanics, tying them in with one or two references from popular culture for each concept.

The development of the quantum viewpoint

I found this to be a fresh take and quite good, generally speaking. Many of the explanations were clearer and more helpful than those I found in other books. I have mixed feelings about the author’s efforts to show how quantum physics is reflected in popular culture, though. There were times when I found the observations enlightening, but more often they just seemed to break the flow and seriousness of the central narrative. I mean, it was quite a step down to move from Einstein‘s debate with Niels Bohr to a discussion of “Quantum beer.” Such moments aside, I found this to be a really valuable book — clear, well written, insightful, and balanced in its presentation of the various interpretations. I enjoyed it.

Rather odd. The authors appear to have adapted their lecture notes. Each chapter starts with an often well-chosen, "geeky" reference to a sighting of usually a snarky or sardonic use of a quantum-related concept or turn of phrase. Then the rest of the chapter dives down into a more conventional course of explaining the theory in reference to a particular theorist. I thought I'd get more out of this, for I am a stereotypical member of a liberal arts audience who needs explanations in simpler forms. While my time was not wasted, perhaps on paper this would have worked better for my attention and my comprehension than audio.

This an incredibly detailed history of Quantum Mechanics that only those already deep into it can appreciate. This is not for newbies (like me). It is well read but in a "beat-the-clock" method.

Lots of opinions and posturing. Not very scientific or insightful. Looks to criticize to sound profound but comes off as elitist.

I’m a layman to the world of Quantum Mechanics, and have been avidly reading everything I can on the subject. This audiobook is extremely well written and exquisitely read. The historical details and the individual insights have helped my understanding tremendously. I’m sure I will reread this audiobook again and again! Thanks for making it available. Laurie.

Really comprehensive overview of the twists and turns of the discoveries in quantum physics... which made my poor little brain ache!

Book full of concepts and theories explained in simple language.

Must listen, multiple times to truly digest its content.