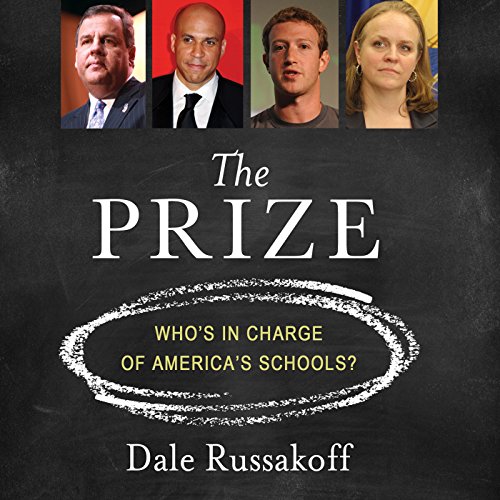 When Mark Zuckerberg announced in front of a cheering Oprah audience his $100 million pledge to transform the Newark Schools - and to solve the education crisis in every city in America - it looked like a huge win for then-mayor Cory Booker and governor Chris Christie. But their plans soon ran into a constituency not so easily moved - Newark's key education players, fiercely protective of their billion-dollar-per-annum system. It's a prize that, for generations, has enriched seemingly everyone, except Newark's students.

One of The Most Anticipated Books of Fall 2015 ( Publishers Weekly)
" The Prize may well be on of the most important books on education to come along in years." ( The New York Times)

What did you love best about The Prize?

Dale explores the the politics of Newark and its education system in exquisite detail. We get to know the inside story on how Cory Booker attracted hundreds of millions of dollars for Newark Education System. His effort to raise money from Mark Zuckerberg, Mark Ackerman, and other philanthropic organizations around the country to raise more than $200 million dollars.An amazing effort with great intent. What I loved the best about the prize was how Dale tells us why the efforts by Cory Booker, Mark Zuckerberg, and Chris Christie failed.

What was one of the most memorable moments of The Prize?

The Fight between Camy Anderson, the school superintendent, and the parents of Newark school children

Pete's reading was so good, that I forgot that he is reading the book instead he brought the book to life. One of the best narrators!

I was encouraged to read this book by a Newark School teacher, who I met on my flight back from Miami! Thanks Stephanie!

What made the experience of listening to The Prize the most enjoyable?

Book was highly recommended by a person who makes large donations. The writer provides what appears to be an even-handed explanation of what went wrong and what the lessons learned should be. My big take away was the politicians and the investors spent too little time listening and collaborating with the community. Finally, school districts are major employers and purchasers of contracts in a city. US schools have a racial history that was ignored. I hadn't thought about the economics and zero sum impact of charter schools. Essentially, the charters drained the public schools of teacher and student talent and the best resources.

What other book might you compare The Prize to and why?

The Prize made me sad and discouraged.

I was sorry to see the promising teachers deciding they had no choice but to move to the charter schools for decent work environment.

While the politicians and celebrities used the Zuckerberg gift to advance their personal careers and agenda, very little was accomplished for the children. I highly recommend the Prize for those who wonder why such a great gift was squandered.

For any teacher or administrator now serving in a public school....this is a must read. Just what does happen when Charter schools come in. This New Hersey experience tells one story

No bad guys in this story just completely diverging agendas for fixing a school system everyone agreed was broken. This divergence causes them still to be broken some $100+million later.

A solid piece of reporting that attempts to explain how more money doesn't usually fix the sort of problems you find in a city long in decline.

Good story on why education in America struggles

A tale of government bureaucracy, top down planning, and misaligned unions. Good read on why education in America fails, especially in poorer inner cities.

Pros: book does an excellent job detailing the inner workings and politics of education in America, specifically public education.

Cons: book casts individuals as heroes and villains at times. This narrative undermines the arguments implicit in the book on how education fails due to the complex cast of competing interests involved.

Narration: narrator has a steady, calm voice and was a good choice for the book.