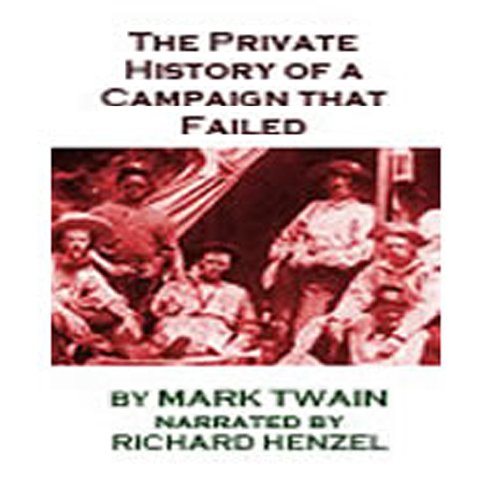 The Private History of a Campaign that Failed

This is the story of Mark Twain's brief career as a Confederate soldier at the beginning of the American Civil War. Mark Twain's "private history" is told from the viewpoint of "someone who set out to do something in the war, but didn't".

What starts out as a kind of class reunion/camping trip quickly becomes a series of frightful near misses with a determined and deadly foe, and ends in painful, premature death for some and a lifetime of guilty regrets for others.

Mark Twain invites us to witness real war first hand, in a time when men still looked one another in the eye in the final moment of battle.

This Mark Twain in Person Library recording is an approximation of Mark Twain's own voice, just as his family might have heard the story for the first time in the family library.

Richard Henzel has interpreted a number of American writer Mark Twain’s works. On this audiobook, he delivers an intimate performance of the essay "A Private History of a Campaign that Failed", a memoir infused with fiction. Twain’s account of his brief time as a Confederate soldier during the American Civil War highlights the confusion, violence, and lasting psychological impact of the conflict. The characters are vibrant and the details are heartbreaking. The prose cuts directly to the point, making clear the horror and the tragedy: "It seemed to me that I was not rightly equipped for this awful business, that war was intended for men and I for a child's nurse."