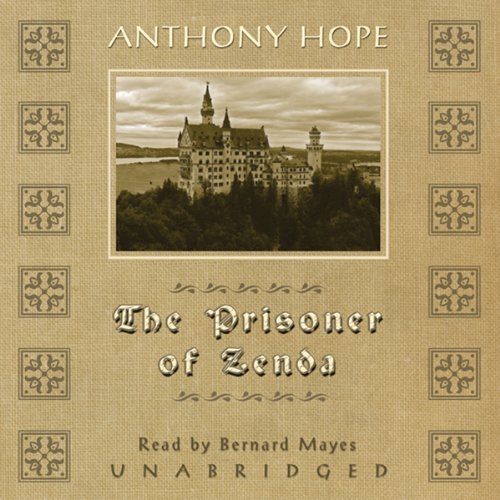 This swashbuckling romance transports a droll young English gentleman from his comfortable life in London to a fast-moving adventure in a mythical country steeped in political intrigue. Rudolf Rassendyll, pondering his life’s purpose, sets out on a journey to the tiny European kingdom of Ruritania, where he discovers that he bears a marked physical resemblance to the king. Perils and adventures ensue when he decides to impersonate the king in order to defeat a plot to dethrone him, and falls deeply in love with the king’s betrothed, Princess Flavia.

With its witty hero and shrewd villains, The Prisoner of Zenda became an instant classic when it appeared in 1894 and has been filmed five times since.

Public Domain (P)1996 Blackstone Audio, Inc.
“The tale speeds like an arrow, never deviating from its appointed course. There are no loopholes, only a rising tide of intrigue and excitement that never abates….” (Nathan R. Teitel, New York University)

If Chapter 4 had been included.

What was most disappointing about Anthony Hope’s story?

He was fine, but Chapter 4 was missing

Anger because Chapter 4 is missing...

The story is a good story but the sound quality is horrible. It sounded like I put my phone in a cardboard box and sealed it up and that was with headphones in. Look for another copy.

His voice seemed to done on and on.

The story is Great, it's a classic, but I would recommend finding a different recording.

This is an older 'classic' adventure story, possibly a little naughty for the time. It is a light hearted story of Kings and Princes and the need to keep a few secrets secret.
There are moonlit flights over the countryside on horses, revolvers and swords, the odd fight with resulting death and capture as well as castles and moats with drawbridges.
I finished the 'telling of tales' with a smile, knowing I too knew the secret.

Well narrated but sound quality was not good. It was almost like an old tape