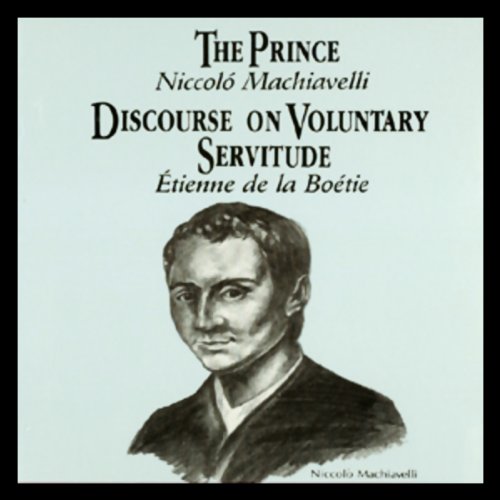 Machiavelli wrote The Prince for his ruler as a guide for gaining and keeping power. Central themes of his essay are the relation between politics and ethics, what the best form of government is, the importance of the Church, and the growth of Italy as a nation-state. The word "Machiavellian" often suggests sinister motives, but some scholars question this traditional interpretation.

De la Boetie wrote Discourse on Voluntary Servitude in 16th century France during the birth of the nation-state, the rise of absolute monarchy, and intense religious and civil wars. He examines the psychology of political obedience, the structure and specific mechanisms of state authority, the motives of those who obey and those who command, and the phenomenon of obedience in the absence of force.

new to book reviewing here:
I wanted a briefing of Machiavelli and ended up learning about Etienne de la Boetie. I feel like I got an extra surprise. The narrator talks about their writings and what the world was like around them so you get an idea of why they said and thought what they did. There are other voices used to narrate different people and that helps me stay focused. No monotone on this recording.
It's a decent discussion about two very important pieces of political/social guidance. FYI: I can't stand fiction. I can only read for academics. On a scale of 1 - 10, 10 being the most comprehendible, I give this audio book an 8. I recommend this book as pretty easy to digest.

Very odd choice for narration I couldn't get past the first chapter, it just didn't hold my attention.

I wanted an un abridged reading of the discourses by Niccolo Machiavelli. this was a playlette with offensively stereotypical Italian accents. it was more narration than actual content from the author. poor at best and largely disappointing. canceling membership and uninstalling the app.