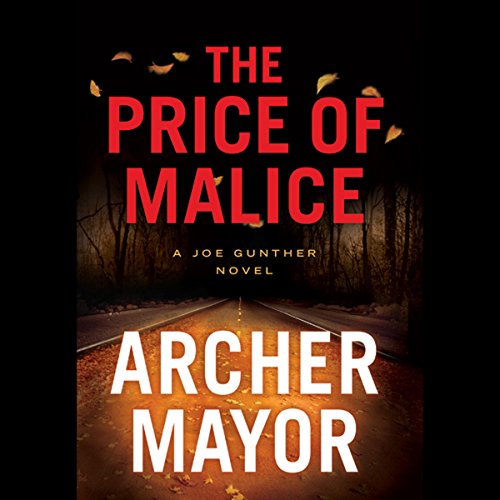 The Price of Malice

Wayne Castine was found brutally murdered and the murderer remains at large. Castine, a suspected child predator, was killed in Brattleboro where he was involved with a tangled network of an extended family living in a local trailer park. Any member of the clan would have had the opportunity to kill him, and, as he was involved with both the mother and her 12-year-old daughter, reason to commit the murder.

At the same time, Joe Gunther has learned that his girlfriend Lyn Silva's fisherman father and brother, believed lost at sea off the coast of Maine, might have actually been murdered. Without enough solid information to warrant law-enforcement involvement, Lyn returns to Maine to try and investigate Gunther's findings. Gunther periodically puts his ongoing murder investigation on hold - irritating his colleagues and angering his bosses - to go and help Lyn in Maine. It appears increasingly possible that her father and brother weren't the good guys that Lyn always believed them to be and that they might have been involved with vicious smugglers who murdered them - and might do the same to Lyn if she keeps pushing.

Torn between his conscience and his heart, a murder investigation and a personal search for the truth, Gunther finds that betrayal and loyalty are often a matter of viewpoint.

I have enjoyed the Joe Gunther series and Tom Taylorson’s narration. William Dufris gives an awful performance, however. He’s trying hard to mimic the gravelly voice of Taylorson’s Gunther and fails so miserably that I cannot get past it to follow the storyline. I see that a number of the next books in the series have this narrator as well. I will probably skip them.

This has been one of the worst of Mr Mayor’s stories AND ONCE AGAIN, performances! The murder story was good but the Silva backstory was a dud. Mr Dufris’ performance was TERRIBLE—he makes Gunther sound like he’s 85 years old and his other voices are so bad, I just can’t find the appropriate words to describe how bad they were. The Lynn Silva character story line is also very disappointing. I’m so disappointed that this was the best Mr Mayor could come up with if he had dried up his creativity with the Gail character! The whole thing was boring and disappointing. I reluctantly gave a “1” performance rating because the review REQUIRED a rating-in truth, it should be a MINUS 1.

Love Joe Gunther series but the change in narration is dismal. Bring back Tom Taylorson.

Can't finish this one

Said often enough I shouldn't keep kicking this dead horse. All the primary folks we've come to know are gone as far as listening goes. Willy's new voice doesn't fit the wise cracking New Yorker I had come to often laugh out loud at. The reader's character voice for Joe made me think Joe was going to pass gas at any moment through the 2nd chapter. I had to stop and I'll skip audible books 21 and 22 also read by this reader.

again, tom taylorson should have been the one to read this book. him not doing so takes away alot of the enjoyment from it. since he did read the first 19 books

This new narrator is horrible

Stories are good but you need to bring back Taylorson.

That combination is the voice of Joe Gunther in this edition. The story is still good, but it makes Joe's statements so unJoe like that I had to laugh. I'm committed to completing this series so I made it through it all. Hopefully there are only a couple by this narrator.

Tom Tillerson or none.

This narrator tried too hard to be Tom Tillerson and was not successful. Skip this title it is very uncomfortable to hear this guy read as he goes through the throes of trying to be different people and sounding like the same one except for the lowering his voice in the highering his voice, it's uncomfortable, he needs to return to reading silently.

Terrible narration. I could not finish. The story didn't interest me enough to try to finish. I usually enjoy these stories, but the new narrator is terrible and is an injustice to the author.

The narration for this book was horrible, but I was able to get through, unlike the previous book. I wish the original narrator was still reading these. Or someone better. You don’t decline narration. Get them to audition or something.

The narration makes or breaks a book. This narration broke it. It was false and fake. I’ve gone through each book and thoroughly enjoyed each - in part because you get to know the characters and understatement. The narration on this boom broke this and I was left wondering who was who etc. I’m going to move to the next book in the series and out this one down to bad experience

Have listened to all the books in order and so disappointed with the narration of this one . They were so far removed from the familiar voices I was accustomed to hearing . Therefore I couldn’t listen past 20 minutes . Would be a shame for a new listener to pick this one first as the other have been a joy

Story OK but narration no so good

The story is good, keep you engaged but not keen on the new narrator. In most performances where the narrator can’t cope with the range of characters, it is the minor characters that get mangled; but here the main character is the one that is difficult to listen to.
Joe seems to either be going through a strange sort of puberty with ups and downs in the voice, or he’s being strangled and every word is an effort to force out.

Very poor narrator a real mistake to change.
The main character sounds so false and a cross between Homer Simpson and Kermit the Frog... very disappointed.

I have read all the previous books, the change of narrator was a mistake