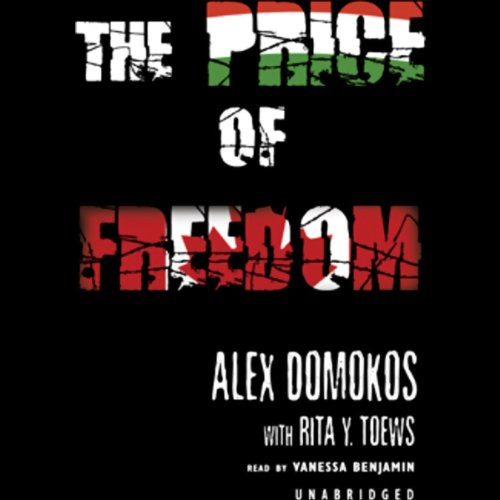 The Price of Freedom

Alexander Domokos wrote this memoir of his years during and after the Second World War with two purposes in mind. He wanted to allow his daughter a glimpse into his past and to enlighten others about the tragedy of his homeland, Hungary.

"I remember how impatient I was with my father when he tried to talk of his youth. I also swept aside my mother's attempts to tell me of her tragic childhood. Many years after their deaths I was fortunate to read their letters and notes, only then realizing my irreplaceable loss: their view of the world at the turn of the century. Most of their experiences are lost to me forever. Often it is only after loss that we realize value. I would like to spare my daughter that irreplaceable loss."

Domokos believes that Hungary's sufferings were due in large part to the unjust peace settlements after the First World War.

"As Hungarians, we were driven into the arms of Hitler by the West's indifference to our legitimate grievances....We had witnessed horrible atrocities committed by the Communists in 1919 after the First World War. Drifting into an alliance with Germany appeared at that time to be the lesser evil."

Even after the Second World War, Hungary underwent more suffering.

"In 1945, while the West was basking in the glory of victory, our abandoned country began a new struggle for survival. My family's hardship was not an exception but rather the norm in that forsaken part of Europe. For us, 1945 was not the end of the war but the beginning of a new kind of struggle."

Even though the West was the victor in the Second World War, Dokomos is asking that the people of the West open their hearts and look more deeply into the effects of the war. He hopes to challenge the victor's one-sided view in seeing themselves as the sole protector of righteousness.

A first class lesson in "the price of freedom" under the suffocating atmosphere of communism and nazism or for that matter any dictatorship.

Very well read gripping story. I highly recommend this book to anyone interetsed not only in history but in an individual's struggle against tyranny, the injustices imposed by the so called great powers and the indomitable spirit of man to overcome great adversity.

One of the best books I have downloaded from Audible.

I enjoy listening to these first person accounts of life after the war. The author mostly does a good job but why oh why is a woman with an English accent narrating a story told by a Hungarian man!?! Definitely annoying and distracting, I didn’t like the narrators voice at all but plowed on through to the end.

A Book EVERYONE should seek out

Enjoyed the historical picture of life from one who lived the transition from socialism (and all its facets) to a free society. His comments from personal experiences to the internal /physical struggles of living in an authoritarian society gives insight to life behind the “iron curtain.” The ending of his journey (and the reuniting of his little girl) was especially touching and fitting to the purpose of this book, “The Price of Freedom.”If you are looking for a rich book of history from one who lived it, this is it. I would highly recommend rdg his amazing journey, a life well-lived.

Insider's view of communism in Hungary

Just visited Budapest and then listened to "I Kiss Your Hands Many Times," with focus on the Jewish tragedy of the holocaust in Hungary. This book provides another perspective from a Hungarian officer POW who was targeted for his privilege under communist rule. Quite a story of adherence to values and principles despite persecution and hardship.

Great story, no problem there, but the narrator IS a major problem. It's a British woman reading the autobiography of a Hungarian man. I was constantly thinking his wife was talking. Why, oh why would the producers choose a woman, with the wrong accent to boot, to read a man's story? It was Such a distractyto an engaging story. C

This is not a bad book, it is an average book in a genre containing truly great books. I was primarily disappointed because the publisher’s summary led me to believe this book would truly challenge the west’s view of itself. It does not. It is an average memoir about the post-war effects of Stalinism on a family. The book does challenge communism, but is that really necessary at this point? (Besides, there are better books filling that need already). Although this is a reasonable story of surviving adversity, it not an inspiring story of heroic confrontation of evil.

Life under socialism and communism is a nightmare. I also recommend Alexander Solzhenitsyn. Cherish your freedom!

Some good information but many missed chances

Memoirs will always be a personal account of a life and therefor naturally miss out areas of lesser interest. That's the author's prerogative.
I missed more insights into the youth of the author, spent in WW2 Hungary. Later on there is far too much detail about his life in Communist Hungary, a truly terrible period in his life and so I can appreciate the unbalance. At the same time, I was beginning to skip forward suring that section,
I would have liked to learn more about the WW2 part and felt the general statements about how Hungarian knew little about what Hitler stood for difficult to comprehend, equally the passage about the homosexual communist party official, whose 'perversions' gave the author an advantage.
I found it hard to listen to a female voice narrating a man's story in the first person, which kept me at a distance to the story often.
All that said, there are great passages and informative and thought-provoking snippets.