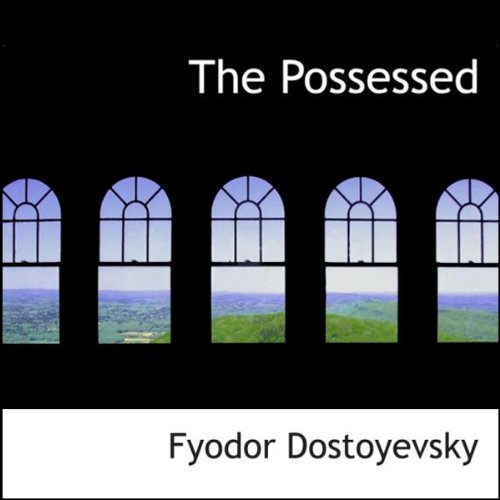 Loosely based on sensational press reports of a Moscow student’s murder by fellow revolutionists, The Possessed depicts the destructive chaos caused by outside agitators who move into a provincial town.

The enigmatic Stavrogin dominates the novel. His magnetic personality influences his tutor, the liberal intellectual poseur Stepan Verhovensky, and the teacher’s revolutionary son Pyotr, as well as other radicals.

Stavrogin is portrayed as a man of strength without direction, capable of goodness and nobility. When Stavrogin loses his faith in God, however, he is seized by brutal desires he does not fully understand.

Widely considered the greatest political novel ever written, The Possessed showcases Dostoevsky’s brilliant characterization, amazing insight into the human heart, and crushing criticism of the desire to manipulate the thought and behavior of others.

Better wait for Simon Vance to read this one...

I'm a huge Dostoyevsky fan, but I found it very hard to enjoy (or, indeed, follow) this audiobook. Mr. Cullen has a very good voice, but, with one or two exceptions, all his characters sound exactly the same. What's even worse, he gives no cues for the change in speaker, which makes many of dialogues in the book almost unintelligible. In a printed book we have paragraph breaks; in this audiobook there is nothing. Another minor (but annoying) feature of his narration is that he occasionally lowers his voice to a whisper. For anyone who listens to the audiobook while commuting, or in any other environment that is not completely quiet, this can be quite frustrating.

In other words: unless for some reason you have to have this audiobook now, I would suggest waiting for a different version.

Don't even THINK about buying this - the worst narrator in the history of audiobooks. The novel is one of the masterpieces of Western literature, yet no one at Audible saw fit to conduct quality control. It is impossible to follow the story. The narrator seems not even to understand the sentences he is reading. Wrong inflection, hammy, wrongheaded, bombastic, simply an embarrassment. I suffered through about two hours of this hoping that somehow he would get the hang of it, since there are no other audio versions. Finally I gave up in disgust. I have listened to many audiobooks, but nothing comes close to this fiasco. It is so bad that it should not even be offered for sale.

Dialogue is the engine of all of Dostoevski's novels. The author is skillful at differentiating the voices of his many characters. The narrator of this production makes almost no attempt to do the same. As a result, the conflict of 'isms that gives the novels its drama is lost. And when the listener doesn't know who's saying what, she won't know who's doing what.
This recording is a major disappointment, especially when compared to Robert Whitfield's masterful performance of The Idiot also by Dostoevski.

The Narrator ruined this great work.

The Possessed is one of my all-time favorite works. Dostoevsky is my favorite author. I am greatly disappointed with Cullen's narrative. Is he incapable of achieving more than one voice? his characters dialogue is indistinguishable from one another. this is extremely frustrating. furthermore, his syntax is absurd. I truly do not believe he really understands much of what he's reading. the emphasis he puts into the ends of some of his sentences is ridiculous and impertinent. It changes the meaning into something resembling senselessness. finally, if you want to give a Russian or foreign work the proper tone and levity a foreign accent generally works best. They should have hired a Brit to narrate this. Thanks for ruining a masterpiece. most of the audio books I have listened to have been narrated wonderfully. I am practically furious that this precious work was so mishandled. I feel bad for so criticizing this narrator's professional work, but i just couldn't keep it to myself any longer. I'm sure he does a fine job with domestic novels.

Where does The Possessed rank among all the audiobooks you’ve listened to so far?

The book is amazing. Complex, realistic and requires much reflection. I read it while listening. Patrick Cullen improves during his narration. The narration is largely good, and with some amendments. This narration includes the censored last chapter. If you expect too much drama from the narration, you may prefer another. But I feel very satisfied with it, provided it's a long book and the narrator made it very well to keep me reading this. This is a complex task to narrated this novel and Patrick Cullen made a good job. The version is the unabridged translation from Constace Garnett, a lovely one, especially for those interested in a more original version of Dostoevsky's works.

Defense of this audio

This audio is from the translation by Constance Garnett. The Barnes and Noble Classic edition also translates the French and provides good endnotes.

I disagree with the above comments in that I believe this narrator does give a good voice to a Russian novel. I don't like Russian characters with British accents. He is especially good with drunken, abusive characters, and with the passages in French.

I do agree with the above comments in that this narrator's characterizations are very limited. I could discern only 5 different characters and that's if you listen closely. He fails to render a good voice for the female characters.

When they say Dostoevsky is like "voices in your head", none exemplifies this idea better than this book. Simply cannot put my finger on what makes the dialogue, and there is much here, so haunting.

I like to refer to artists like Dostoevsky as "raw geniuses", whose ideas are so powerful they seem to not care about keeping the reader interested. How could someone of this depth be hooked on the shallow sport of gambling? Not enough turmoil in his life already? Maybe I'll find out when I read/hear The Gambler.

I wasn't nearly as engaged by this book as I was with Crime and Punishment. I was hoping Part 3 would make the rest worth it, and I guess it barely did. But there are lots of better books than this to read. Maybe I was missing some context.

After listening to several hours of Possessed, I decided to get the book and follow along. Unfortunately, Audible doesn't say who translated D's novel, and after two tries (2 buys), I stopped purchasing the book.
Then I read these reviews. Now I understand why I was having difficulty understanding the plot and socio-political themes this novel is noted for. I guess, like trying to find the appropriate translation, I will stop trying to understand this audiobook. I am disappointed because I am a fan of D, and I was hoping to further my relationship with his great works. You see, I once thought that D was the nihilist/rebel, not the one who was trying to prove them wrong. I'm hoping that by studying him more I might discover new truths about his theological/political views.
Especially for long books, and little time to read them, I appreciate having audio to facilitate my reading. So, Audible, let's try this one again, and let's provide all pertinent information.

This is a wonderful story with Dostoyevsky really at the height of his powers - I believe this was written shortly before The Brothers Karamazov and served as a build up to it, touching on many similar themes. As with other classic Dostoyevsky is is about love and death, meaning and God, the old and the new, religion and science, but always with wonderful characters and inventive and touching story lines.

Something I'd like Audible to consider is making a synopsis of an audio book available. With a story like this it is sometimes possible to miss a key fact or statement and then you are left a little stranded for the rest of the chapter, I found I had to go back to the book to check I had understood what was happening, which isn't really the point of having an audio book.

A great book ruined by the reader

Would you try another book written by Fyodor Dostoyevsky or narrated by Patrick Cullen?

I certainly wouldn't buy anything that Patrick Cullen reads.

I don't know. Cullen's reading was so monotonous and irritating.

There was hardly any differentiation in the voices, so it was often difficult to know which character was speaking but even worse, Cullen had the habit of suddenly throwing a sharp and completely unnecessary emphasis on a couple of words--usually towards the end of the sentence. It was like someone drumming the table with his fingers in an endlessly repeating pattern. It was just awful.

If you could play editor, what scene or scenes would you have cut from The Possessed?

I can't tell you much about the book, my appreciation of it was completely spoiled by the reader's performance.