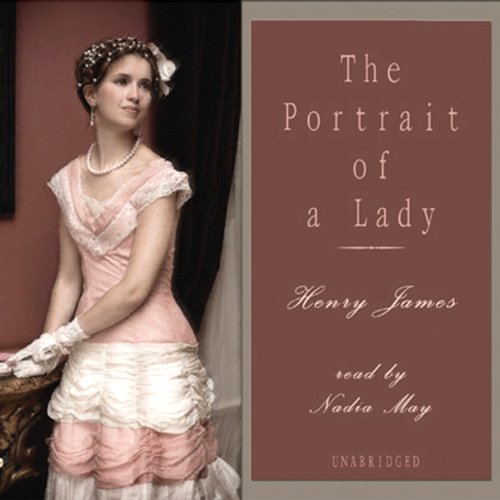 An American heiress newly arrived in Europe, Isabel does not look to a man to furnish her with destiny; instead, she desires, with grace and courage, to find it herself. Two eligible suitors approach her and are refused. She then becomes utterly captivated by the languid charms of Gilbert Osmond.
©1881 Public Domain (P)1995 Blackstone Audio, Inc.

Nary a good marriage to be found...

I have tried repeatedly to give Henry James a chance, and had avoided previous "Portrait of a Lady" recordings because I read negative reviews about the reader/audio quality. So when Audible released this version of "Portrait" I decided to dive in. The first piece of good news--- the reader and recording are both very good, I definitely recommend.

The second piece of good news-- the book is compelling. Although the book is titled "Portrait of a Lady," I think it more an exposition on marriage than one particular person. And if this book is representative of James's view of that particular institution-- the state of marriage in Western society circa 1860 is bleak indeed. Some of James's characters border on caricature, but others are deeply drawn -- particularly the villains. The book is more engaging than I'd ever have expected, I genuinely wanted to find out what would happen next, plotting and exposition exist beside character study and psychological insight, which I hadn't expected. About 3/4 through the book I said to myself-- I am really enjoying this! So I do recommend this recording, and for those of you who found books like "Washington Square" to be, well, trivial -- this one does exceed that mark. My only real complaint is that James didn't end the book well. I don't mean that he didn't end it happily or conclusively or satisfactorily -- he simply did not write an ending that is worthy of the book that came before. A common complaint of mine but one I was surprised to find with this particular writer and this particular work.

A Most Excellent Heroine

This is a great work by Henry James, the story of Isabel and her reluctance to search for love, in the meantime setting her up with the wrong man, one who challenges her independence.

I particularly loved her Aunt and Uncle and extended family, folks who took her in after her father died and treating her as if she was their daughter or sister - very lovely indeed. Her independence when it comes to finding her future lover is quite hilarious when she starts to meet men in London, with practically every fellow she speaks to immediately hitting on her, and being sent on their way with low-hanging heads after just a couple of encounters.

One can tell how much her family really loved her when her uncle dies and she's given an inheritance, a wealth that allows her to travel across the continent, meeting Gilbert Osmond and eventually marrying him, much to the dismay of her former suitors and her cousin Ralph, one who treats her like a younger sister.

Chapter 42 is a rather life-changing point in Isabel's life, several hours spent in her bedroom into the wee hours of the morning, wondering whether or not her choice to marry Gilbert was a mistake. Another turning point in the novel is when she's told that her husband never married the father of his little girl - one that she's come to love as her own - and is doing now what he did to his former lover, using her for her money.

The story is a fantastic one that illustrates how money can be both a blessing and a curse, guiding a person of independence into a life of poor choices and regret.

When it comes to Nadia May's performance, it is a terrific one! Each character has their own subtle tone, easily discerned from the others. And her expression in both dialogues and narration make it easy to understand the importance of what each character is thinking or doing. Very nicely done Ms May, not to mention Henry James!

What can I say, It's Henry James

Classic..but a little slow for me

I have to say I feel completely unqualified to criticize this book. But as they say "haters gonna hate" -- so I do want to point out a couple of things I just did not like about this book. But before that, the good stuff. The writing flows very nicely and I thought it got better as it went along. You feel like you are listening to something that you could never write yourself, which provides an aura of getting your money's worth and appreciating someone who is great at what they do. And now for my two major criticisms. First, I cannot stand the ending. It's fiction. Real life is obscure and ambiguous, but fiction should not be. Give me some closure for pete's sake! Second, at times the writing really gets bogged down and takes itself too seriously. I love Dickens who writes a thousand pages and every descriptive phrase -- just as long and detailed as James -- seems to have more life to it. That having been said, as I mention above, some of this falls away in the second half of the book and it moves along nicely.

The subtleties of Henry James's style might not seem designed to be listened to as an audio book. But in fact this reading works excellently since Nadia May always shows insight and understanding of the text, so that the reader's attention is held both during long passages of analysis and reflection and during dialogue, where she distinguishes and projects the various characters most convincingly.James' text does repay slow and careful reading,but for many people this reading may be an excellent way to get into a novel which is demanding but very much worth the effort.

An good book, somewhat given to lengthy analyses, but nonetheless enjoyable for that. The story was a lot about nothing, not really a page turner, but still worth reading.

Not as enjoyable as expected

Would you ever listen to anything by Henry James again?

What aspect of Nadia May’s performance might you have changed?

Sometimes she seemed to muddle the voices when the characters were in dialogue with one another.

It was just a slower and more complex 'read' than I had expected. I have read other books by James which I have enjoyed and usually I love 19th century literature. It was difficult to like many of the characters - with the exception of Ralph and Lord Warburton.

The subtleties of Henry James's style might not seem designed to be listened to as an audio book. But in fact this reading works excellently since Nadia May always shows insight and understanding of the text, so that the reader's attention is held both during long passages of analysis and reflection and during dialogue, where she distinguishes and projects the various characters most convincingly.James' text does repay slow and careful reading,but for many people this reading may be an excellent way to get into a novel which is demanding but very much worth the effort.