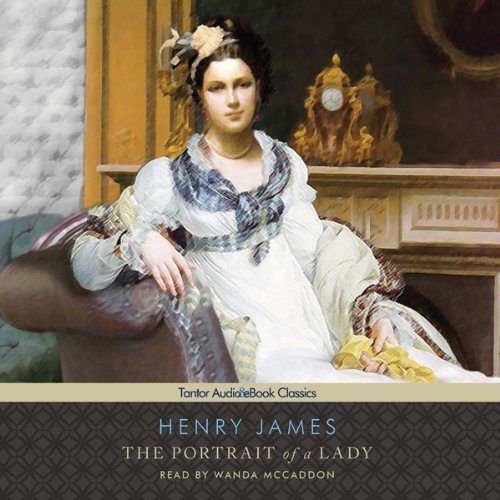 The Portrait of a Lady is the most stunning achievement of Henry James' early period - in the 1860s and '70s, when he was transforming himself from a talented young American into a resident of Europe, a citizen of the world, and one of the greatest novelists of modern times. A kind of delight at the success of this transformation informs this masterpiece.

When Isabel Archer, a young American woman with looks, wit, and imagination, arrives in Europe, she sees the world as "a place of brightness, of free expression, of irresistible action". She turns aside from suitors who offer her their wealth and devotion to follow her own path. But that way leads to disillusionment and a future as constricted as "a dark narrow alley with a dead wall at the end". In one of the most moving conclusions in modern fiction, Isabel makes her final choice.

Cosa pensano gli ascoltatori di The Portrait of a Lady

Beautifully read, but oh so bleak. You have to love James to love this one. I like James, and liked this.

Listening to this audio book was one of the great literary experiences of my life. Like most of James's novels it is complex; but once I got absorbed in the story I was completely hooked. Wanda McCadden's reading is phenomenal.

Marvellous and still so relevant

Achingly beautiful, sad, complex and perplexing, and in places funny, The Portrait of a Lady should be followed by a strong dose of Luce Irigaray; for Henry James, like that good French feminist did some 100 years hence, exposes the circulating commodity of women - bought, sold, bartered and discarded by men, and what that means for that "sex which is not one".

"In still other words: all the systems of exchange that organize patriarchal societies and all the modalities of productive work that are recognized, valued, and rewarded in these societies are men’s business. The production of women, signs, and commodities is always referred back to men (when a man buys a girl, he “pays” the father or the brother, not the mother … ), and they always pass from one man to another, from one group of men to another. The work force is thus always assumed to be masculine, and “products” are objects to be used, objects of transaction among men alone." (Luce Irigaray, The Sex Which is Not One" (1985)

Would you listen to The Portrait of a Lady again? Why?

Probably. It's a very detailed book and explains the characters' motives and thought processes so thoroughly, yet without taking you out of the story in the least, that you feel very connected to everything going on. Some people find this a drawback in James' work but I find it a highlight. This sort of exposition makes the story much more realistic and connectable.
With so much detail, rich characters, great dialogue and an engaging story, I could definitely see myself re-reading this in future.

The storyline between Ralph and Isabel.

Which character – as performed by Wanda McCaddon – was your favorite?

Yes. The pacing is very good.

Wanda McCaddon's performance is quite excellent in many aspects but she does have a difficult time maintaining separate voices for each character sometimes and will slip even in a conversation between only two characters. It can be slightly confusing from time to time but I would still recommend her as she's good with conveying the right emotional tone.

I couldn't tell you if this was a good book as the narration is so poor I have not been able to get past the first chapter and I couldn't understand the narrator. Where did you find this woman!

Would you ever listen to anything by Henry James again?

Maybe, with a good narrator