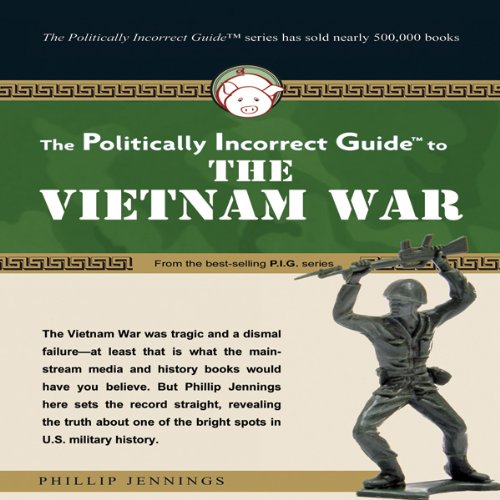 The mainstream media and history books would have you believe that the Vietnam War was tragic and a dismal failure. But Phillip Jennings is here to set the record straight, about one of the bright spots in U.S. military history. In this latest Politically Incorrect Guide, Jennings shatters culturally accepted myths and busts politically incorrect lies that liberal pundits and leftist professors have been telling you for years.

The Vietnam War was the most important—and successful—campaign to defeat Communism. Without the sacrifices made and the courage displayed by our military, the world might be a different place. The Politically Incorrect Guide to the Vietnam War reveals the truth about the battles, players, and policies of one of the most controversial wars in U.S. history.

This is like the cliff notes version of the war. I was over there 67-68, and have read 28 books about the war from the POV of both sides.
He picks and chooses from the history books like a preacher harvesting his favorite Bible verses.
Just a terrible book. Not worth five minutes of your time.

Two sides to every story, even Vietnam

It was refreshing to hear this account, by someone who not only researched the war and met some of its people, but was there fighting it. Our military had the VC beat, but were kept on a leash by an over-cautious government bent on a "limited" war. Still, Nixon had them beat after the Christmas Bombings, when he made them accept the Paris Peace accords and then brought the remaining troops home.

It might have ended like there...except North Vietnam, who could never leave their Southern neighbors alone, invaded (according to the author, our press refused to call it an "invasion") and the Democratic Congress held back air and naval support. The North Vietnamese were still getting help from Russia and China. Case closed.

Jennings also dispels the common image of the Vietnam vet--most have actually done quite well.

(BTW, I read once of a North Vietnamese vet who came to visit US vets. He said the war was a living hell for "Charlie," too. They suffered PTSD etc., but when they went to their government for help, they were told they'd won the war and therefore had to be OK.)

Jennings also reminds us it wasn't a civil war; the South simply minded its own business, but the North wanted to conquer the whole country for their ideology.

The author doesn't flinch from telling what America did wrong, but also shows what America did right. And there's a whole appendix on the Pentagon Papers and how they were presented to the public, that I found very interesting.

After listening to this, I got the idea that our whole memory of that time has been twisted out of shape. My image of it was, the US government were doofuses, we got bogged down in an unwinnable quagmire, the North Vietnamese weren't so bad, it was the US who had everything to be ashamed of. I never seemed to hear about how oppressive the North Vietnamese government was or how they refused to stop attacking the South. When they finally took over, thousands of boat people fled out to sea to escape. All I heard, read, or saw in movies over the years was shame on us, shame on us, shame on us!

Well it's good to be reminded there are two sides to every story, even this.

A book that discusses and dispels some of the myths of the Vietnam War. A more reasonable discussion about the strangest and least understood war of our nations history. Not a revisionist rehash of the war like Ken Burns documentary.

I wanted to enjoy this but it’s full of lies and complete distortions of reality.
The author makes a few good observations but his assessment that America won the Vietnam war and many other falsehoods made me realize he’s insane

If you want to know the truth about the Vietnam War, read this book. We won the war, but the Democrats gave away our victory by refusing to provide the air support that we had promised to South Vietnam if the North invaded. The Democrats betrayed South Vietnam and snatched defeat from the jaws of victory.

This provides some very very interesting facts about the Vietnam war and exposes many of the myths about the war that are popular and believe by so many that were misinformed.

Finally, someone gets it right.

Would you consider the audio edition of The Politically Incorrect Guide to the Vietnam War to be better than the print version?

As a veteran from that era, I am acutely aware of the lies and political spin surrounding the war. Few authors would have tackled the topic, understanding the culture of disinformation surrounding it. From what I personally knew, the data presented was far more accurate than the standard fare now available.

What does Tom Weiner bring to the story that you wouldn’t experience if you just read the book?

excellent history of the Vietnam War. Reports the truth as those who attended have always known

Author validated everything I've said for the last 50 years since my last tour with the Navy in 1970. There's no guesswork in this account. Phillip Jennings knows this subject. The kakistocracy in Washington was then and is now totally void of honor and integrity. I probably won't live to see it, but the pendulum will swing the other way. GOD BLESS AMERICA!

An excellent account of the Vietnam War. It was well written, well performed, and truthfully. It honors those brave souls who fought against a terrible tyranny, and brings into the light those who supported and encouraged it.

My compliments and my thanks to all those who made this pissible.