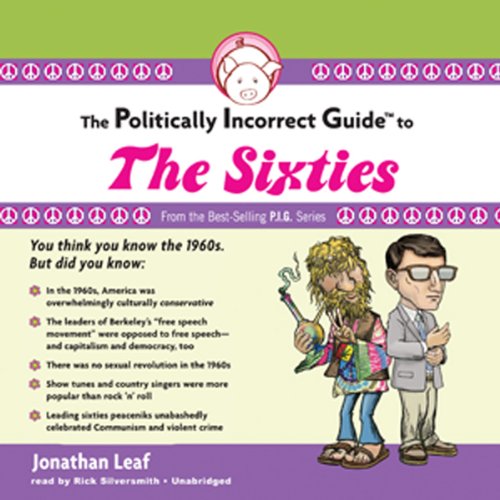 In this blast from the past, Leaf exposes the lies and busts the myths propagated by the liberal establishment. Did you know that the civil-rights movement did little to improve the lives of average African Americans and that most Americans actively supported the Vietnam War and the draft?

The Politically Incorrect Guide to the Sixties proves that the anti-Vietnam War sentiment and free-love slogans that supposedly defined the decade were just a small part of the leftist counterculture. The mainstream culture was more politically incorrect, but you'll never hear that from a liberal pundit or read it in a politically correct textbook.

©2009 Jonathan Leaf (P)2009 Blackstone Audio, Inc.
"Has any decade been more mythologized than the 1960s? I doubt it. Read Jonathan Leaf, who corrects and debunks the conventional wisdom - and who also teaches us interesting and important things about that time, and ours." (William Kristol, editor, Weekly Standard)
"Jonathan Leaf almost makes the 60s worth it in this merciless debunking of the myths of our decade of shame. Fun, informed, and - above all - valuable." (Rich Lowry, editor, National Review)

When I looked for the supposed 34 reviews, but all I found a double entry by a leftist jerk who had nothing decent to say. My assumption was that he certainly didn’t listen to the book, he just picked it because it was “politically incorrect” then ripped it and the whole series. Since the book is “included” I suppose most people don’t bother offering a full review for a free book.

This made me want to listen more than anything, because I’m used to seeing trolls rip good books and podcasts because they don’t like the politics of the author.

By the way, the book IS good for what it is. If you actually want to hear a viewpoint that runs counter to the mainstream narrative, then that is what you’ll get. If you are on the left, expect your beliefs to be challenged. Make no mistake - nobody is saying that this is only a dull recitation of facts. It is opinion bolstered by facts, and the personality of the author does shine through.

This is the 6th or 7th one of these that I have listened to and they have all been really good, this one ranks somewhere in the middle, but its just because of topic interest.

Native New Yorker of Brooklyn Nine-Nine I haunted the streets of Laura Manhattan fourth Street the jazz clubs for houses it will Santa mazing Lee Headey time everyone was trying to figure out what was happening. And what did happen with hang around the clubs meet girls. And around midnight with half the Staten Island ferry and play bongos and drums 28 in New York in the 60s this book is probably one of the most accurate descriptions of the beat generation hub Greenwich Village wash Park it’s worth reading it’s beautifully and accurately describing a lifestyle big apple village. Thank you for wonderful memories. Today I’m an ex pat New Yorker because I had to get the hell out of there. I suppose I grew up I suppose I’ve felt there was some thing more. Thank you for a good book

Would you try another book from Jonathan Leaf and/or Rick Silversmith?

No. It's mostly just opinions by someone who doesn't like the view of 60's culture.

Has The Politically Incorrect Guide to the Sixties turned you off from other books in this genre?

Yes. I expected the "politically incorrect" part to be non-biased facts.

Did Rick Silversmith do a good job differentiating all the characters? How?

If he was going for an opinionated curmudgeon, he nailed it.

It was on sale.

If you're looking for fact based political incorrectness - and I was - skip this series. Over all, it was just not that good.

Poor right wing crap on the side of the establishment.. Just not fun at all