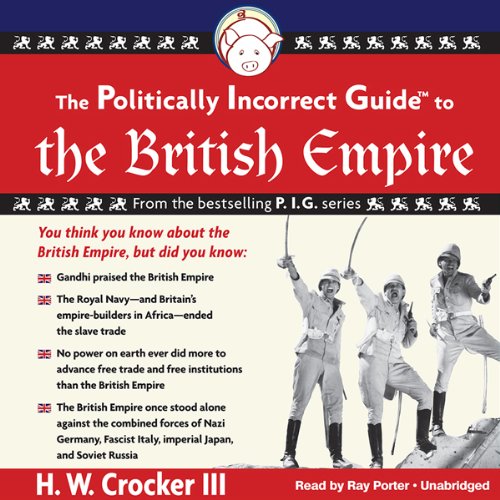 Nothing offends liberals more than Western imperialism—it is racism, sexism, and chauvinism all in one. And of course the epitome of Western imperialism is the British Empire, the biggest empire the world has ever known, covering at its height a quarter of the globe’s surface and ruling a quarter of the world’s population. Here, best-selling author H. W. Crocker III exposes—in brawling, rambunctious style—how the British Empire was actually one of the greatest establishers and defenders of freedom in history.

So strap on your pith helmet for a rollicking ride through some of history’s most colorful events. The Politically Incorrect Guide to the British Empire provides a panoramic and provocative view of 400 years of history that will delight and amuse, educate and entertain.

©2011 H. W. Crocker III (P)2011 Blackstone Audio, Inc.
"As someone who grew up in India, I often hear people ask, ‘What have the British done for us?’ Until I read this book, I didn’t have the full answer.” (Dinesh D’Souza,  New York Times best-selling author)

Before I start this review I want to say that politically I consider myself solidly on the right. I enjoy reading about European Empire’s and do so frequently. However I found this book to veer more into propaganda and far right wing bigotry than solid unbiased history.

The author sets off to try and show that the British Empire was a entirely positive entity with basically no faults. Somewhat bizarrely in order to do this he goes through many of the worst crimes of the Empire like the Amritsar Massacre and various enslavements of peoples and tries to explain why they were actually good things. He calls the genocide of the Maori “fun with muskets”. And says the Opium Wars were great examples of free trade that was good for China. How importing tons of addictive drugs into China and fighting a war to do this was good for them he doesn’t explain.

Compare that to a much better written book about the Brits, Niall Ferguson’s Empire: How Britain Made the Modern World, where in order to show the positives of the Empire he talks about how it made people richer and more interconnected. In this book the main way the Empire is shown is, look at these atrocities, they were actually justified because these other people were so primitive, and it showed our people’s natural superiority and made them richer and better at fighting our other enemies. Which I don’t think the average person will find a very convincing argument. I think the fact that the author is actually an American from the South who usually tries to justify the Confederacy and show actual slavery in a good light is what hurts this book. He lacks a sort of elegance of a British academic and more comes off a trashy southerner trying to proclaim his racial superiority.

The author repeatedly tries to credit England with the invention of “The Republic” which is funny because that’s a Latin word. The context for basically every thing the authors condemns in the book is very poorly given. He tries to ignore the things like why people would be upset about massacres, and enslavement. And finds very roundabout ways to show that people like Gandhi were actually terrible.

Mid way through the book he has a chapter about Ireland. In which he basically finds every major quote in which a historical figure says something negative about the Irish. He then goes on to ironically calls them a hateful people, and relatedly call them poor ignorant savages who deserved in his own words to be made into Helots(slaves).

In you are looking for a unbiased book about the British Empire I’d go for The British Empire by Stephan W. Sears. If you are looking for a book that shows the Empire positively I’d read Empire: How Britain Made The Modern World. Which is a book that is actually persuasive. The politically incorrect guide reads more like propaganda, that teaches very biased history without much greater context. And has undertones of raving racism and snobbery to anyone that’s not a White Anglo Saxon Protestant who is sympathetic to slave owners.

By the end, I lamented both the end of the book and the fall of the British Empire!

While this is not a white-washing of the history of Britain, it is a tale seldom told of the rose, glory, and recession of the greatest empire in the history of man.

You disagree? I challenge you to listen to the tale of this book with a truthful heart and not form a similar conclusion.

I quite liked the book, which challenged the notion that the British Empire was a bad thing from beginning to end. Crocker could have made a stronger case if he had either not focused so much on the biographies of individual imperialists or if he had better explained the importance of those whose bios he covered.

While trying to come off as coherent and rebellious challenging modern concepts on the nature of past British imperialism. The historic narrative sharply veered off into the realm of implausible followed by impossible and finally landing squarely within the realm of the ridiculous.
It is understandable, and praise worthy, to develop perhaps an understanding of British imperialism from the perspective of the twin pillars of liberalism and conservatism. These concepts were terribly defined. It is not understandable to simply excuse outward racism and prejudice.
I have many more serious problems not least of which the overt sexism, clear bias towards religious fundimentalism, and describing the second opium war as a victory to instill free trade, but I won't spend all night writing this review. The real point of this book is a poorly written excuse riddled fantasy account of history extolling the virtues of a fictional Libertarianism over a modern equally fictional 'politically correct' Socialism.
TL;DR This book is garbage. Not worth the read.

I really wanted to hear the logic

Alas, there is only rambling. Author completely ignores things like a) relative riches of India China and other colonies before British colonialism b) brutality and viciousness of many events during occupation c) lack of parliamentary representation of subjugated peoples. And so on.
He rambles on hopping between disconnected things like communism, French colonialism, 2-word quotes from American presidents etc.,

In a time where its all too popular to denounce the British Empire, this books shows that logic, fact and history are not on the side of the arm chair moralists but those who served in other nations with honor and innovation. This good is great about exploring the triumphs as well as the over emphasized failures of the British in the world.

This program was quite enjoyable. It’s overarching theme that the British Empire, when all is said and done, was, generally, a worthy endeavor was convincingly argued. Also, the author was perfectly forthright and fair in his summary of the many individuals that he covered, exposing their heroic deeds and devotional care of those they served and protected. He shows how of those that left the Empire and did not treasure and put into practice or maintain the governing style and moral code given by Britain sank into abject failed states.

A Swashbucklers' Guide to the British Empire

Unlike other books in the "Politically incorrect" series, Porter fails to present a coherent argument against the "politically correct" position on the issue. Rather; what is portrayed is a series of biographies of heroic pro Empire adventurers. Entertaining however this may be, the same could be done for many a despotic Empire.
Many questions remain: Was it worth it? Did it help or tyranise the locals? On net was the Empire a profitable expence of British blood and treasure? Was the Empire an integral part of British success or should one focus on religion, culture and philosophy?
This book disguards historical analysis favouring dastardly tails of bravado to trigger the Libs.

It skips around from period to period but still flows very well. Refreshing read without just being propaganda.

Do Not Read This Book

I am the first to say that it is good to engage with arguments, discussions and people that you disagree with. However, my intellectual disagreement with this book, the fact that is dismisses the genocide of thousands of colonised natives in favour of a deeply unfashionable big-man history of white colonisers, is nothing compared to the patronising tone, clickbait format and blatant inaccuracies that pepper this book. It is at best profoundly selective and at worst deliberately misleading. Not to mention my personal favourite - the misuse of the word 'Scotch' to describe the Scottish people. Mr. Crocker, Scotch is for whisky and eggs, Scottish is for people. If there was ever proof that Americans lack awareness of culture, race, history and The concept of 'facts' this is it.

Outstanding homage to the greatest empire.

A great, accurate and factual account of the glorious triumph of humanity that is the Great British Empire. There are many nefarious individuals who desperately work day and night to keep this truth from the public conscious. They are failing.

Not what I thought it'd be

The book consists of around 20 disconnected autobiographical histories of important figures who created the British Empire. However, there is virtually no argument for or against the British Empire being a good or a bad thing. Rather, Crocker just seems to like the people he describes and on the basis that they were quite fascinating characters the British Empire was a good thing. Any sort of analysis of what the British Empire actually did, for good or ill, was not present.

Nice book, that gives you a little insight into the much washed over and over simplified elements of the past

The British Empire was actually one of the greatest establishers and defenders of freedom in history. This book tells you how and why.

A book that promotes itself with such pomp and ceremony, that dives head first into Britishness, to be read by a robotic American is absurd. Absolutely unlistenable. Make no mistake, I am sure the narrator is perfect for other tasks but it simply doesn't work here. I got Audible on a free trial and this was one of the books. I'm glad I didn't pay for it.

Good narrative but some gross oversimplifications

Broadly a good narrative, which is necessarily quite high level. However, at times the book is over simplified / has some gross ommissions to fit the doggedly-pro empire opinion. British exit from India for example makes no mention of the US and UN (and the financial pressures on the UK) rather that exit was primarily due to unnecessary magnanimity after defeat of the Indian national army, and that this just encouraged further civil revolt.

How can you be anti British, after listening to this?!
Very thankful I stumbled across this book.

Well researched, well written and read with appropriate panache as befits a subject of such magnitude, complexity and significance. The author , though far from being uncritical , asserts the many benefits brought by Pax Britannica. Commerce , profit and self preservation were not the whole story, and in the main the Empire's reliance on fair dealing and good governance with a light touch is amply dealt with. It is a view of the British Empire that needed to be told.

How it should be told, how we pushed forward and created a great nation without all that left wing garbage.