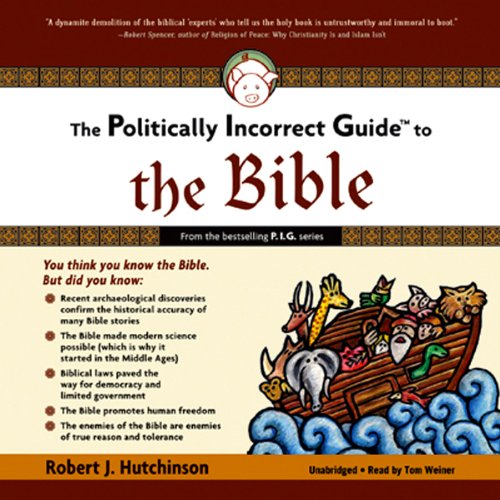 The Bible remains the best-selling book of all time, believed by nearly two billion Christians and Jews to be divinely inspired. But in this hard-hitting new book, author Robert J. Hutchinson proposes that it is actually much more than this. The ideas enshrined in the Bible, he says, triggered a revolution in human thought and established the moral and philosophical foundation for Western civilization, from the recognition of basic human rights and belief in limited government to authentic feminism and the development of empirical science. He explains that it is more a "culture-war" book than a work of religious apologetics.
©2007 Robert J. Hutchinson (P)2007 Blackstone Audio Inc.
"A dynamite demolition of the biblical 'experts' who tell us the holy book is untrustworthy and immoral to boot." (Robert Spencer, author of Religion of Peace: Why Christianity Is and Islam Isn't)
"Robert Hutchinson is a great reporter and a great defender of Holy Scripture. Hutchinson has mounted an urgent, necessary, and sprightly defense." (Robert Moynihan, Ph.D., medieval studies, Yale)

A positive presentation for Christianity's contribution to science, slavery, and many other hot buttons throughout history until the present.

Not PC but more than likely true

Great answer to PC critics. I enjoyed the pointing out that the famous contemporary critics of God and Christ are not scientists - generally not more than commentators. This book is a good companion to Lee Strobel's book " A Case for Christ".

these should be labeled the right wing musings of

I downloaded all of the politically correct series, but I am still waiting on facts, not rant sessions against liberals. these books need FACTS.

Wow, where do I start? this book tries to prove the bible right, but it hardly makes any valid points. Some historical facts are right, loads are wrong.

This is what the book tells us:
everything in the bible is right. anything that proves it's not is wrong.

atheists are evil, they are compared to Hitler and Stalin

all other religions (except judaism) is wrong and primitive. most are evil...

anything that is good is because of the bible

gay people are winning and wroooong, same thing with abortion and contraception

anything bad the church has ever done is justified with that they fought something worse.

would not recommend this to anyone wanting to learn anything.

Although this book just skims the surface of a variety of topics ranging from science to slavery, it provides a good springboard for further study. This book deals head on with many arguments made against the Bible regarding it's accuracy and morality. It especially provides key contexts for Biblical mandates in the Old Testament as well as the prevailing culture of civilizations during the Old and New Testaments. A good listen overall.

loved it, must read! very incite full with good reference and historical context. would recommend.

While the content of this audiobook is excellent, I must confess that it was the superb reading of the text by Tom Weiner that enthralled me. If every single audiobook in my expansive library could be read by Mr. Weiner, I would be exceedingly pleased! This of course cannot be, but it doesn't hurt to wish it so.

Nevertheless, Mr. Hutchinson did a great job presenting many evidences to corroborate the authenticity of the Bible. The self same book that has for many years, offered me both strength and encouragement!

This is a fairly typical Christian apologist tome. It's starts off with some "shocking" statements I presume designed to titillate believers, but quickly falls into "...and history confirms X, therefore the Bible is true". It grows tiresome pretty quickly, although I made it better than half way before putting it down in boredom and annoyance. Spend your time checking out a much more interesting and objective book by Neil de Grasse Tyson -- The Sky Is Not the Limit: Adventures of an Urban Astrophysicist -- as he illuminates the wonders of our world, you will not be able to put it down. Veritas Omnia Vincit.

MUCH of what this book says is true. However it is presented in such a judgemental, biased, uncaring way it is unlikely anyone but the zealots will agree with it.
Also a shame that those who wrote and performed this book will see this review as a triumph and victory when it is, unfortunately, quite the opposite.

Learned quite a bit more about the Bible

Learned quite a bit more about the Bible. I didn't find any of the books as being politically incorrect.

Would you try another book written by Robert J. Hutchinson or narrated by Tom Weiner?

What could Robert J. Hutchinson have done to make this a more enjoyable book for you?

Cut out all the misinformation, back up claims with actual facts, cut out petty personal smears on other people with different opinions,

Would you be willing to try another one of Tom Weiner’s performances?

His pretend voices were irritating but on the whole OK

What character would you cut from The Politically Incorrect Guide to the Bible?