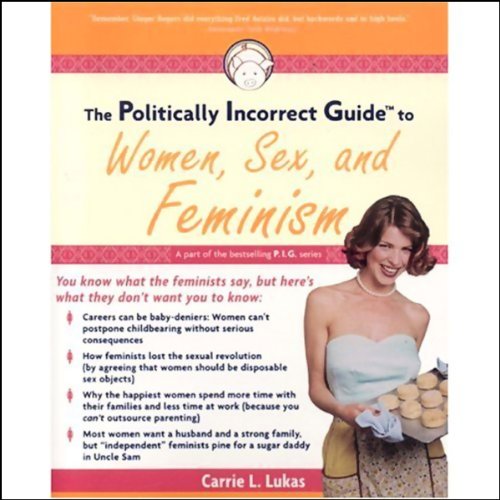 The Politically Incorrect Guide to Women, Sex, and Feminism

We've been duped. We were raised to think we could have it all. In college we were told that men weren't necessary. Pop culture told us that career, not family, came first. The idea of being a stay-at-home mom was for losers. And yet are we happier than our mothers or grandmothers, who grew up before women were "liberated" by the sexual revolution? For many women, the answer is no.

In The Politically Incorrect Guide to Women, Sex, and Feminism, Carrie Lukas, a young career woman and new mother, sets the record straight, correcting the lies women have been told and slamming the door on the screaming harpies of NOW, feminist professors, and the rest of the bra-burners who have done so much to wreck women's lives.

deceptively misleading book. just a load of conservative garbage. the first chapter itself puts you off.

narrator was great. i loved the story and the development of the ideas. it flowed nicely and makes sense. although, for a "politically incorrect" guide to women, sex, marriage, and feminism, i felt this book went right to the precipace of pushing hot buttons but didn't quite take the dive i had forseen in a few instances. it definitely could have gone farther. exactly for this reason i would feel comfortable in reccomending this book to my own "feminist" lady friends. i look forward to rereading after i have my own children.

The basic premise is sound...

Phrase 1 feminism: get the vote (good) Phrase 2 feminism: equality in the workplace (good) Phrase 3 feminism: insist on the "right" to be vulgar, promiscuious and obnoxious (all supposedly "rights" of self-expression over social order and decency). It hightlights just another aspect of how our society has grown terribly lazy and vulgar and falls back on the "rights culture" to justify it. There are some contradictions and logical fallacies here, as there always are in particularly right and left geared books, but the basic point is clear and valid. Women actually moved backward in Phrase 3 and brought themselves lower rather than higher in social standing.

If your daughter is getting her sexual education from a public school, then this book should be mandatory reading/listening as a compendium.

I felt a bit outdated

I don't live in America and it might more related to it as the book felt a bit outdated. I don't think quoting Thatcher etc. are not in vogue even on the right.

Very interesting book as the outlook on life, liberty and pursuit of happiness was so different to my own.

This book really had me thinking and in a good way

I absolutely loved the book. The research was shocking, but in reality it made sense.

What disappointed you about The Politically Incorrect Guide to Women, Sex, and Feminism?

This book was a bit disappointing as it seemed more conservative than I thought when purchasing the book. I liked how the author emphasizes the importance of traditional marriage that so many modernists have forgotten about.