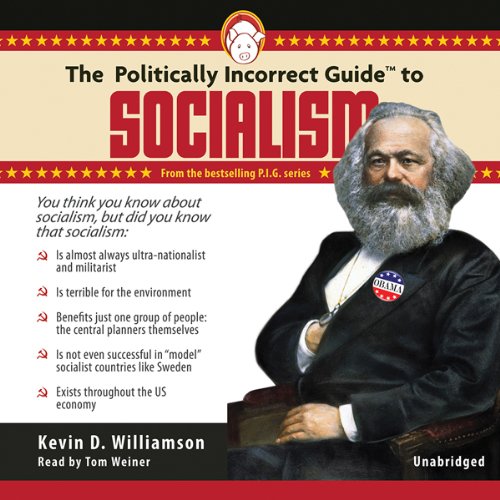 Liberals scoff when conservatives denounce Obama and his policies as socialist. After all, they argue, Obama isn’t Stalin and America is nothing like the Soviet Union. But socialism doesn’t always resemble the Berlin Wall or the Iron Curtain, as National Review editor Kevin Williamson proves in his new book, The Politically Incorrect Guide to Socialism.

In this new P.I. Guide, Williamson reveals the truth: despite what the liberal politicians and leftist pundits would have you believe, the policies coming out of Washington today are nothing more than socialism disguised as equality and justice for all. Tracing socialism back to its roots, Williamson defines this misunderstood ideology, explains the different forms socialism takes on, and shows how it is thriving right here in the United States in the form of “Obamacare”, financial regulations, and more. Offering conservatives the political and rhetorical ammunition they need to combat the liberal lies about one of the most misunderstood ideologies in modern history, The Politically Incorrect Guide to Socialism reveals why everything socialism purports to do, the free market does better.

©2011 Kevin D. Williamson (P)2011 Blackstone Audio, Inc.
“Kevin Williamson methodically demolishes the allegedly angelic good intentions behind socialism to reveal the demonic consequences of its implementation.” (Jonah Goldberg, editor at large of National Review Online)
“Williamson shows why the problem with socialism isn’t just that it hurts the economy, but that it undermines all the institutions that allow a free society to function—and that is why it can’t coexist with liberty.” ( Mark Levin)
“Kevin Williamson cuts through the confusion about socialism, providing long overdue clarity and precision.…[This] book is scholarly, informative, and absolutely fascinating.” (David Limbaugh, author of Crimes Against Liberty)

I got this book to learn about socialism simply because I felt I had no real clue what socialism is, and the folks I asked all had different opinions. I now realize that I'm one of the few people who actually understand what socialism is. I'm shocked now how easily I had bought into socialist programs before, not even realizing the pitfalls and problems lying ahead because of it. What's more, I'm a business consultant, and I'm even more shocked to see how socialism keeps making its way into corporate America! I finally understand why many of the programs I've been kicking against are the way they are, and that is giving me the power to actually fix them.

Not only is this book utterly clear in it's explanation by providing two straightforward characteristics that define socialism, it is filled to the brim with surprising examples (at least to be) from around the world as well as here in the United States that serve to demonstrate how socialism works, and how it affects the people that these programs touch.

Tom Weiner's performance was magical. At first, I struggled to keep up because the material is both deep and concise, but once the foundation of terminology and meaning was established for me, I actually enjoyed the pace. Throughout the book I kept being impressed with Tom's voice, his casual yet matter-of-fact manner, and his great pronunciation, including of foreign names and words. I will definitely be looking for more books narrated by him.

Wish all would read before the next election

Best explanation of Socialism I've ever read. Explains just how socialist the US already is.

Clearly presents the essence of the argument.

The argument against capitalism whether from the socialist, communist, or progressive has always been framed as degrees of caring for the less fortunate vs the cold capitalist. That is not the argument at all as this book clearly explains.

This is the most entertaining book I’ve listened to on socialism. He does a good job at keeping the reader interested and uses modern day examples of socialism in our society.

they will not teach you this in college

milk prices. The government sets milk prices who are they looking out for? not the guy staring down a dry bowl of count chocula ... 😁. my favorite quote in the book.
they will not teach you this in college Orr High School. this should be mandatory reading covers how the left has slowly socialize the schools medicine and the justifications that are used.

Dear Reader: Do yourself a favor.

Read everythig this guy has ever written. Then read an assortment of pieces in the Atlantic and listen to some npr. And decide what you believe.

right wing rhetoric. completely biased and basically just a view that big oil is good and new green energy ideas are bad. Definitely a hater of democrats and President Obama 🙄

every young person should read this! and most older people too! brilliant common sense from a complex field.

great book but the narrator is speaking one hundred words a minute. i had to slow the title to 75 percent of its normal speed to understand it.

Some difficult concepts which I needed to hear s 2nd or 3rd times. I will recommend this course!