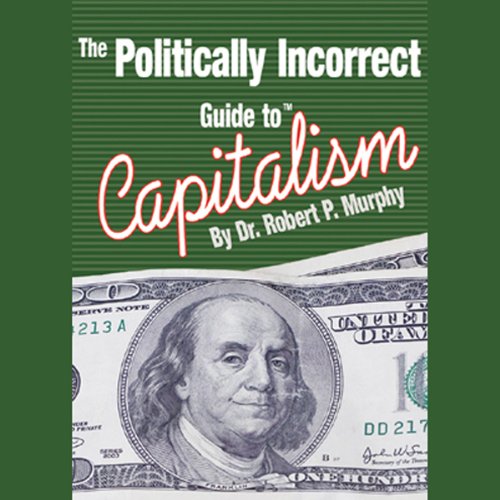 The Politically Incorrect Guide to Capitalism

Participating in the economy is a part of everyday life, yet much of what is commonly accepted as fact is wrong. Keynesian schoolteachers and the liberal media have filled the world with politically correct errors that myth-busting professor Robert Murphy sets straight.

Murphy explains hot topics like outsourcing (why it's good for Americans) and zoning restrictions (why they're not). Just like the other books in the P.I.G. series, The Politically Incorrect Guide to Capitalism pulls no punches. Murphy defends the free market on such issues as safety regulations, racial discrimination, and child-labor laws, in a breezy manner that is anything but textbook-like. The Politically Incorrect Guide to Capitalism sets the record straight on everything you thought you knew about economics.

Without question an anti-"big government", anti-liberal, and pro-capitalist book. The author has no qualms voicing his distain for government controls on economics or shortsighted and politically motivated interference with the free market. Having noted this less than respectful attitude towards Democrats, the book is filled with sound economic education. The author quotes both Adam Smith and Ayn Rand on numerous occasions (which gives a good indication of his stance) and offers a number of excellent scholarly works as reference in the "books you aren't supposed to read" vignettes. Not as well written, or as practically informative as Robert Kiyosaki's "Rich Dad" collection, but unabridged, and 'sound as a pound' in it's economic basis. Highly recommend as basic info, a starting point in economics, and as ammo for political conservatives.

Introduction to the Austrian School of Econ

This book is very similar to Henry Hazlitt's Economics in One Lesson. It is an introduction to free market economics and the Austrian School of Economics. It is a great book to learn the basics from.

Economics for the lay person

You don't have to be an academic to understand the common sense that Murphy lays out in The Politically Incorrect Guide to Capitalism. This book will help you identify what you've instinctively sensed has been been wrong with our economic policies and what needs to be done to fix them. From this book go on to read Peter Schiff and Thomas Woods, and other authors who explain the Austrian school of economics thinking.

Content: Excellent. A thorough primer in the fundamentals of economics as applicable to modern times. As a P.I. Guide it supports the (indisputable, IMO) logic of "free market" economics, supported by numerous quotes from Frederic Bastiat, Adam Smith, Milton Friedman, and even Ayn Rand (Capitalism, The Unknown Ideal and The Virtue of Selfishness), to name a few. And, as a P.I. Guide, it is tongue in cheek and lightly sarcastic at times, but not to its' detriment. It also mentions 2 of my other favorite economic primers, Economics in One Lesson by Henry Hazlitt and Free to Choose by Rose and Milton Friedman, amongst the many books it suggests for additional reference. For a relatively short book (224 pages in paperback) it covers seemingly most of the major topics one should learn about to understand economics. (Surf the 'net for more detailed descriptions of the contents.) I absorbed this nearly 6 hour book in a single day and I'll be listening to it again. I highly recommend it.

Easy to listen to and really informative. I'm an dedicated capitalist - and I learned something every few minutes.

If you lean towards a conservative slant in the least this is a great book. If you are liberal this is even better to listen too, really!! If you want to argue about capitalism or learn about it this is the book for you. It is worth every penny.

a little extreme on regulation but a lot of good info over all. worth the read

If you could sum up The Politically Incorrect Guide to Capitalism in three words, what would they be?

Have you listened to any of Perry Richards’s other performances before? How does this one compare?

Murphy is always entertaining as well as educational

Like the other titles in this series, this one is really well done. On par with Tom Woods' US history title of the series, Bob Murphy shows a grasp of the subject through and through. Murphy is one of the best Austrian theory economists out there. He is able to communicate the theory, break it down into simple terms, provide examples, and provide illustrations to support the theory. If you haven't heard a presentation by Dr. Murphy he's entertaining as well as educational.

What Dr. Murphy does in this book is dismantle the traditional Keynian economics model, shows the errors of socialism, and show the negative consequences of government inclusion in the market. This is a great primer for those wishing to get into economics. I would say this is about as great as Henry Hazlitt's magnum opus Economics In One Lesson. High praise indeed; and well deserved. Final Grade - A+