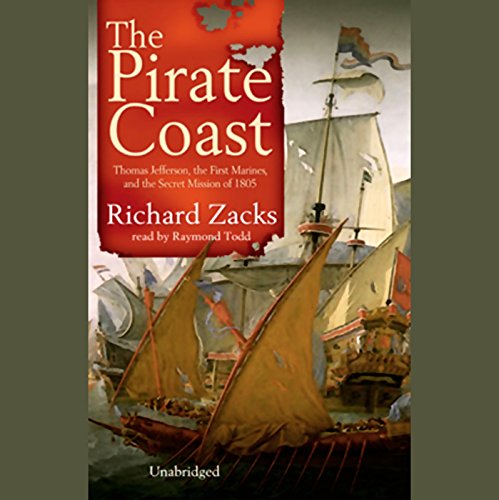 After Tripoli declared war on the United States in 1801, Barbary pirates captured 300 U.S. sailors and marines. President Jefferson sent navy squadrons to the Mediterranean, but he also authorized a secret mission to overthrow the government of Tripoli. He chose an unlikely diplomat, William Eaton, to lead the mission, but before Eaton departed, Jefferson grew wary of the affair and withdrew his support.

Astoundingly, Eaton persevered, gathering a ragtag army, including eight U.S. Marines, and leading them on a brutal march across 500 miles of desert. After surviving sandstorms, treachery, and near death from thirst, Eaton achieved a remarkable victory on "the shores of Tripoli", as commemorated in the Marine Corps Hymn. His triumph gained freedom for the American hostages and newfound respect for the young United States, but for Eaton, the aftermath wasn't sweet. When he dared to reveal that the president had abandoned him, Jefferson set out to crush him.

"Zacks has researched thoroughly, writes entertainingly, and shows a knack for sea stories and characterization. This is the book that Captain Eaton has long deserved." (Publishers Weekly)
"Zacks does an expert job of explaining the diplomacy and machinations of the U.S. government....Where Zacks excels is in his research, quipping asides, and loving grasp of the subject" (Kirkus Reviews)

I am a huge fan of the Patrick O'Brian novels and have been looking for authors that write about that time period fiction or non fiction. This book hit the mark. It is well researched and well written. The authors meticulous research and writing style will lend itself well to educating future generations. He brings the story alive! The narrator is not the best (he is actually hard to listen to) but after you get into the story you do not notice or care.

Unbelievable detail. Those who love history will thoroughly enjoy this book. You come to know the main character of this non-fiction in vivid detail. The stories of courage and patriotism during the birth of our nation is refreshing.

Interesting History I Knew Nothing About

Really an entertaining book. This is one of the best listens that I have heard in a long time. I never knew this history before and would never have guessed that anyone could lead such an exciting and dangerous life in those times. The history was presented in such an interesting way that I laughed and cringed at the same time as the narrator presented the story. The story teller does an above excellent job in making the history come alive for the listener.

This is an amazing story which gives the reader insight into both history, politics, and the nature of man. This is product of an amazing amount of research. It is not an "easy read" because the author includes too much detail which does not support or add depth to the main story line. Still, it is an excellent work and well worth the reader's time.

A hero, a war with muslims, a slick president

Richard Zack's second book about pirates and piracies, "The Pirate Hunter" being the first, is an excellent read. In command of the most fitting language he sets a standard for historical writing. His recollection of an almost forgotten historic affair is breathtaking. All of his conclusions are backed up by primary sources, which he quotes frequently. Among the surprising facts is not only that America forgot a truly unforgettable hero in William Eaton, but also that the conflict with the Muslim culture of slavery and piracy is not new. Thomas Jefferson's role in the aftermath of the described incident is surprisingly shameful and eerily modern and the author deserves much praise to identify and prove the president's conflict between political interests and moral, short-term and long-term interests. If the Tripoli incident had been backed up by Hamilton and finished by Eaton as planned - maybe we would not have the problems we have today. This book will be a classic and serve for many years as a source that determines the roots and reasons of conflict between Muslims and Americans. The narrator, Raymond Todd, does his job well. Even though the first chapter is read rather amateurishly, where he lowers the voice at the end of each sentence in a boring, unappealing fashion, he becomes much livelier towards the end. It is though not the task of the voice actor, but of the editor or producer to ensure this type of issue. I am looking forward to listen to more books read by Mr. Todd and authored by Mr. Zack.

Great book - couldn't stop listening to it. Have listened to it 3x over 2 years. A truly great history book in that it teaches not just about the past but about present day conflicts as well.

It is about the underbelly of government deals

Very Interesting book. They reader makes it more interesting then it would have been, had it been read by someone else. Even listing of the items on a manifest, sounds not dull. It's a much more in-depth look at history then you get in any school book, I tell you. The Fact is, that in that time of the world, as with any other, those who are true, are always outdone by those who are sneaky. They show a lot of the back stabbing that went on in politics, and the poor people who suffered for it. The constant distrust of Muslims and Christians. The slave trade, and how deals are made, broken, remade, rebroken, and then remade (till one side gets power enough to rebreak the deal). sigh. Can no one be trusted?
Don't be fooled into thinking this is a war book. there are very few battles in it. It is about the underbelly of government deals, and the REAL people who pay for them.
This book is amazing in the fact that everything that happens Then, is just as pertinent now.

This account of the US conflict with the Barbary "pirates" (Muslims) is entertaining, succinct and accurate. The book's observations of how the Muslims negotiate, fight and act holds true today as the conflict between the West and Islam continues.

This account of the US conflict with the Barbary "pirates" (Muslims) is entertaining, succinct and accurate. The book's observations of how the Muslims negotiate, fight and act holds true today as the conflict between the West and Islam continues.

I found this book very interstin and Richard Zacks clearly has heavily resaerched the diaries letters and documents of the people involved which provided a great deal of insight into a barely covered period. A slight flaw is that Zacks has a tendency to over amplify the importance of the events impact which is apparent when you realise he is talking about the actions of a US Navy that is in its entirity smaller then then fleets that fought at the contemporary Battle of Trafalgar or a rebellin that relied on a doxen US marines at the same time as Napoleon was leading the Grande Armee to Austerlitz.

In truth the only real problem is that Raymond Todd the narrator does not know how to pronounce topgallant, forecastle, boatswain or cockswain in the correct navel way, instead he simply reads the word as it is written, ordinarily this would be a minor point but in a book so heavily concerend with ships and naval warfare it becomes very distracting and prevented this good book being 5* to me.