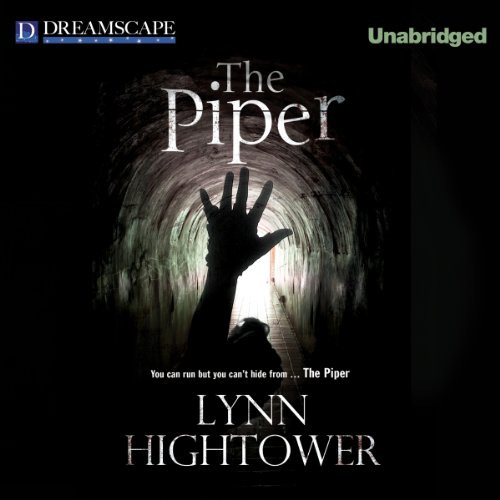 When Olivia James receives a phone call just after midnight, she recognizes her brother's voice. But there's a problem: Her brother has been dead for the past nine weeks. Moving back to her old childhood home in Tennessee - the place where her brother has just died - her young daughter, Teddy, seems troubled, telling her mother that she's being visited by a menacing ghost. When another tragic death occurs and her daughter disappears, Olivia must confront the demonic force that has cursed her family.

A Paranormal Gem from an Unexpected Source

Where does The Piper rank among all the audiobooks you’ve listened to so far?

"The Piper" rates among the highest of audiobooks I've listened to, which includes the whole "Girl with the Dragon Tattoo" series as Stephen Jobs' biography.

What other book might you compare The Piper to and why?

This is much like Stephen King's work at his best--dark, well-written, and scary.

What does Xe Sands bring to the story that you wouldn’t experience if you just read the book?

Xe Sands could probably carry off a one-woman show on Broadway. She has a theatre full of voices, all interesting, and she commands as a storyteller.

I just finished “The Piper” by Lynn Hightower, which simply blew me away. I’ve known Hightower as a Shamus-Award-winning mystery writer, so I didn’t look into what I was buying at all. I started the Audible book, and was quickly introduced to Olivia James, a pragmatic Southern woman living in Los Angeles. She receives a strange phone call from her brother who assures her everything is all right, that he “has paid the piper.” The thing is, her brother has been dead for nine weeks.

I don’t buy scary horror stories like this or those by Stephen King. Truth is, I get scared. When I was a kid, I saw a movie called “Thirteen Ghosts,” and it haunted me for weeks. Best leave that stuff alone.

Still, I felt compelled to go on with “The Piper.” Olivia has lost her job, gone through a divorce, and is about to move back to her childhood home in Tennessee with her eight-year-old daughter. Olivia has inherited the house from her brother.

For me, alarms immediately sounded. Don’t go into that house where your brother died! Olivia, though, is a Southern steel magnolia, an agnostic of the paranormal. There has to be logical reasons behind the weird stuff that starts happening.

I listened in the car, as I walked the dogs, as I worked out, and even as I lay in the dark in bed just when I really shouldn’t be listening. I had to find out what happened. The reader, Xe Sands, voices each character, male and female, masterfully. The experience is akin to a listening to a great story around a campfire. Things in the story get worse and worse, yet you have to know what happens next. There isn’t a wasted sentence. Olivia James is a strong character in an overwhelming situation.

The story goes to amazing places—and it is truly frightening. I don’t think I can read another like this for a while. Yet I’m deeply satisfied. Now my only worry is can I find another audio book as great as this one?

Holy Cow That Was Awful!!

I downloaded this book because of the narrator, Xe Sands. She was awesome in the book the Ex. I figured she had principals about the types of books she narrated. Boy was I wrong. This book is just plain dumb. People all around the main character die and she shows little to no emotion. I should have guessed this writing would be awful when the main character's daughter's name was Teddy. I swear, if I hear the name Teddy one more time, I am going to call on the Piper myself!

Listened to it in one sitting, thank God for blue tooth headphones, this book was AWESOME!!

this book is stunning! I could very well see this book be put into a movie! twists around every corner. Lynn Hightower is truly an artist.

Would you try another book from Lynn Hightower and/or Xe Sands?

Definitely from Xe Sands. I really enjoy her reading and it brings so much out of the story.

Would you be willing to try another book from Lynn Hightower? Why or why not?

Try, maybe. I wasn't hugely taken in by her style or characters but there wasn't anything outstandingly wrong with them either. I felt like her style lacks suspense building which at least for horror doesn't really work. However, the idea of the story was interesting, if a bit "kitsch" for the lack of better word.

Have you listened to any of Xe Sands’s other performances before? How does this one compare?

I got this book for Xe Sands actually. I thought her performance in The Vanishing was better but it doesn't mean this was bad at all. I'd love to have all female-centric horror books published ever read by her!

Do you think The Piper needs a follow-up book? Why or why not?

I think the story is well contained in one book. It would definitely offer itself for follow-ups but that would significantly cheapen the first. However, if the author was up for trying to truly one-up herself, this would be an interesting challenge.

I'm debating if this is a book I'd at any point like to re-listen. I'm thinking if I would, I'd just do so because of Sands, not really for the story. I can't imagine picking this book up and reading it.

When I first listened to this story I was a little disappointed by the narrator ,she was a little fast and I found myself getting anxious, but as the story unfolds I forgot about the narrator!
This was a very creepy horror story, because the the killer was around but never seen and I think that makes the story a lot more creepy, its spooky and sad too, never thought it would twist and turn like it did highly recommend this story.

I found the story good. but what let this down badly for me was the narrated Xe sands her voice just grated through my head and I found it very hard to keep listening she has a very high Gravel voice. Who ever it is man or woman she uses the same tone so it is hard to know who is speaking which is a shame because it is really good. If they change the narrated I would consider getting this book again but for me now I would never listen to this one