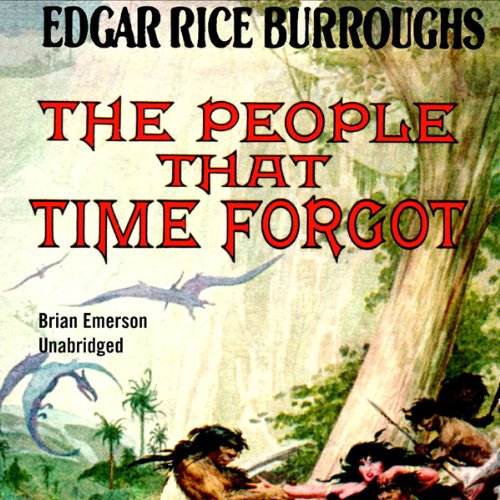 In uncharted Caprona, a continent lost from the map of the Earth, where Time has stopped and all primeval creatures of long-gone ages still prowl, Bowen Tyler is lost. To find Tyler, Thomas Billings travels across the world to Caprona, where even stranger mysteries await him, and a barbaric civilization hides, torn between the impassable jungle on one side and an unknown menace on the other.
The People that Time Forgot is an Edgar Rice Burroughs novel in his most exciting tradition.
(P) Blackstone Audiobooks

The People that Time Forgot offers all of the pulpy masculine adventure found in The Land that Time Forgot. There’s a constant stream of bears, dinosaurs, sabertooth tigers, barbarian warriors, and other creatures to fight, so Tom gets to prove his manliness as he moves from one exploit to the next.

And there’s romance, too, of course. Soon after arriving on Caspak, Tom saves a slender and “adorable” scantily-clad girl who he can’t think of romantically because she’s dirty and “so far beneath me in the scale of evolution.” He spends a lot of time thinking about how he can’t fall in love with a savage, but she turns out to have dimples and nice teeth and Tom discovers that he can’t bear to leave her in the end. Burroughs doesn’t give her much personality, but he does tell us that she’s keen-minded, shrewd, and she makes a great companion. (It’s nice to see that she has some desirable qualities other than her exposed slender figure and her dimples.)

Caspak is a strange land and there are some mysteries to solve. The island has a few subhuman primate species, but no children have been seen by the Americans who’ve visited. How can an adult-only society exist? Some of the intriguing (but not at all believable) answers will be found in this book, but others must wait for the next book, Out of Time’s Abyss.

I’m listening to the audio version of the CASPAK trilogy. This installment is read by Brian Emerson who did a better job than the narrator of the previous book did. I wouldn’t hesitate to recommend this version if you want to read The People that Time Forgot. You can also find the book in the public domain.