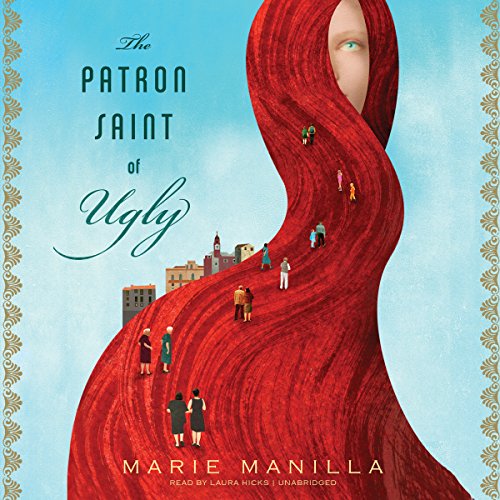 The Patron Saint of Ugly

Born in Sweetwater, West Virginia, with a mop of flaming red hair and a map of the world rendered in port-wine stains on every surface of her body, Garnet Ferrari is used to being an outcast. With her sharp tongue, she has always known how to defend herself against bullies and aggressors but finds she is less adept at fending off the pilgrims who have set up a veritable tent city outside her hilltop home, convinced she is Saint Garnet, healer of skin ailments and maker of miracles.

Her grandmother, the indelible Nonna Diamante, believes Garnet’smystical gift can be traced back to the family’s origins in the Nebrodi Mountains of Sicily, and now the Vatican has sent an emissary to Sweetwater to investigate. Garnet, wanting nothing more than to debunk this "gift" and send these desperate souls packing, reaches back into her family’s tangled past and unspools for the church a tale of love triangles on the shores of the Messina Strait; a sad, beautiful maiden’s gilded-cage childhood in blueblood Virginia; and the angelic, doomed boy Garnet could not protect.

Saint or not, Garnet learns that the line between reality and myth is always blurred and that the aspects of ourselves we are most ashamed of can prove to be the source of our greatest strength, and even our salvation.

I bought this book for all the wrong reasons: it was on offer, I liked the title and I loved the cover.

Two chapters in, I was so taken aback by the style and the content that I thought, "Damn, I knew those were stupid reasons to buy a book" and almost stopped reading.

Then I examined my own reaction and realized that I was in a kind of reader's shock. The problem with reading something original and different is that the WTF reaction can produce complete disorientation. My imagination struggled for traction, not because the writing was difficult or obscure, but because the style and the content of the story were so different from what I'd expected. I was having difficulty figuring out what I was supposed to do with the book.

The answer, of course, was open up my imagination, relax my preconceptions, and listen to what the author had to say.

A third of the way through the book, I was in love: with the characters, with idea of a story told as a series of first person accounts on tape to a third-party, with the deft skill Marie Manilla showed in moving back and forth along the timeline in a way that enhanced my enjoyment and deepened my understanding and with the constant dance between magic and reality, belief and logic, love and hate, fate and choice, that was presented in a series of bravura performances, ranging in intensity from a broadway musical, through classical ballet to a passionate flamenco.

This book made me think, made me cry and made me hope. Two thirds of the way through, I wanted it to go on forever. I wanted to wrap myself up in this world and never leave.

Sadly, I found the ending week and disjointed. I got nothing at all from the last chapter, which, although it bookended the first chapter, seemed so disconnected from the action of the novel that I became irritated with it.

There are things about the book that people may find challenging: the plot and the narrative style walk a tightrope between the reality and myth, making it hard to know what I was meant to believe or not believe; forcing me make and re-make my own decisions on the truth of the tale. The language in the book is casually (but deliberately) offensive to modern-day ears (Poor Italians in America who live on DagoWop Hill - insult, humour, honesty, all of the above?). The attitude towards the Catholic Church, the clergy and the nature of miracles is antagonistic to the point of insult. Men are depicted, for the most part, as nasty, brutish and short-lived. The rich are shown as selfish, vain, and vicious. The poor are shown as superstious and ignorant.

What lifts the book above a rant or a semi-mystical piece of nonsense, is that it is powered by a deep understanding of the need for love: the love between father and daughter; mother and daughter, husband and wife. It shows families in different configurations and holds them to a single test of worth: do you love each other?

This book is bold and innovative and ambitious so it is inevitable that there were points were I found myself momentarily pitched out of the story when my ability to believe had been stretched too far, but the book as a whole is a joy I'm glad I didn't miss.

Slow start but I stuck with it and I'm glad I did. The pace picked up and the story blossomed.

The hook takes time to set.

This novel, nor the reader, hooked me right away. In fact, I first thought, "What a waste!" But I kept coming back because I hate wasting money, and when the story set in at last, it set in pretty solid and the voice and tone of the reader made sense. It's not apparent in the first few chapters how much heart is in the story. There's a ton of it. Just be patient. Something about the entire package grows on you in some weird way, and by the end, I was sad to say goodbye.

Not My Cup of Tea

As an avid Audible listener this is the first book I returned. I couldn't get interested in any of the characters and the tone of the book was too flippant for even a light read.

When I started this, I loved the author's use of language but felt Garnet was working to be funny and failing. As I read farther it got harder and harder to stop listening. The story is both sad and sweet. (I was.married to an Italian man who had all of the virtues and none of the failings of Garnet's dad.)

Quirky, lots to think about

What was one of the most memorable moments of The Patron Saint of Ugly?

Don't want to give it away, but the scene where Angelo & Nicky get in the car

Hard to say, each is so different. Maybe when Nona takes the tape recorder.

The story and the narrator kept me engrossed in the book. Except for the very beginning, when you don't know who is who yet and the female reader is supposed to be a man, she did an excellent job. Light but not too light. Heavy, but not too heavy. Read it, and you will have something to think about. It would make a good book club selection.

Rambling without any purpose

What disappointed you about The Patron Saint of Ugly?

The story had no real plot, it just kept rambling from place to place and often just didn't make sense.

Has The Patron Saint of Ugly turned you off from other books in this genre?

I appreciated the tasteful treatment of what happened to her brother, though not really my favorite part just my favorite quality of storytelling by the author,

If you could play editor, what scene or scenes would you have cut from The Patron Saint of Ugly?

I wanted to like this, but it was just untenable, to me.

keeps you wanting more. although the ending was a bit predictable but still a good story.

Today I am really tired. WHY? Because I stayed up way too late finishing this terrific book! It had everything I love in a novel: fully-fleshed out characters, a relatable setting (I am of Italian heritage, raised Roman Catholic, and it's set in about the same time as my own life), and a hint of magic realism. It's told in first-person narrative, a style I enjoy when the narrator has a strong voice as this one does.

Hicks is a masterful reader who does an excellent job in the accents. it fondly brought to mind my own Nonna.

I highly recommend it.

I really enjoyed the story and the narration with the different accents. it was fun.