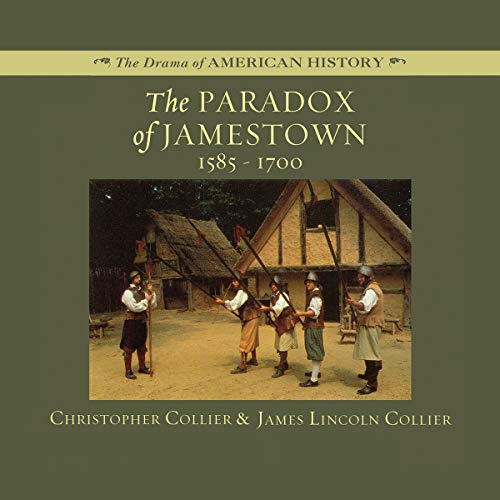 History is dramatic - and the renowned, award-winning authors Christopher Collier and James Lincoln Collier demonstrate this in a compelling series aimed at young listeners. Covering American history from the founding of Jamestown through present day, these volumes explore far beyond the dates and events of a historical chronicle to present a moving illumination of the ideas, opinions, attitudes, and tribulations that led to the birth of this great nation.

The Paradox of Jamestown discusses the circumstances surrounding English colonization of Virginia and the evolution of slavery in that colony. Beginning with an examination of 16th- and 17th-century life in England, the authors explain many of the reasons - social, political, religious, and economic - people chose to leave the Old World for a new life in the Americas. They describe the early interactions between the settlers and the Indians, the difficulties those groups had in establishing cooperative relationships, and the many difficulties the settlers had in adjusting to life in the New World. Hear about the effects of the growing market for tobacco back in England, the gradual changes in how the new colony was governed, and the growing dependence on the slave trade.

To the auther...they are to be called "enslaved people", not "slaves".
the author seems symphathetic to the institution of chattel slavery. The story of pocahontas used in this book has been proven false.

book seems to be written from an ignorant white perspective. I can't trust anymore books by this author.

Good but too short for the price

I enjoyed the book and narration but it was over in a flash. No problem with that, but should charge at most 0.99c