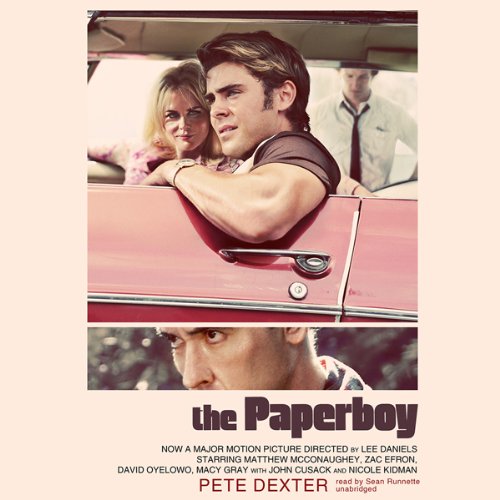 The sun was rising over Moat County, Florida, when Sheriff Thurmond Call was found on the highway, gutted like an alligator. A local redneck was tried, sentenced, and set to fry.

Then Ward James, a hotshot investigative reporter for the Miami Times, returns to his rural hometown with a death row femme fatale who promises him the story of the decade. She’s armed with explosive evidence and aims to free - and meet - her convicted “fiancé.”

With Ward’s disillusioned younger brother Jack as their driver, they barrel down Florida’s back roads and seamy places in search of the story, racing flat out into a shocking head-on collision between character and fate as truth takes a backseat to headline news.

Pete Dexter is the author of the National Book Award–winning novel Paris Trout, among others. He has been a columnist for the Philadelphia Daily News and the Sacramento Bee and has contributed to many magazines, including Esquire, Sports Illustrated, and Playboy. His screenplays include Rush and Mulholland Falls.

©1995 Pete Dexter (P)2012 Blackstone Audio, Inc.
Poliziesco Suspense Psicologico Ispirato a film, TV e videogiochi
Mostra di più Mostra meno
“An eerie and beautiful novel. Its secrets continue to reveal themselves long after the book has been finished.” ( New York Times)
“[Dexter] has written as sparsely here as in any of his previous books, and most of what carries the reader along so irresistibly lies beneath the surface of his prose.”—New York Times
“With clarity and an amazing capacity for simplicity of language and down-home metaphor, Dexter weaves a tale that exposes the extremes of goodness and nastiness that exist in newspaper life.”—Washington Post

Would you try another book from Pete Dexter and/or Sean Runnette?

I might try anther book by Pete Dexter but not the narrator. He was monotone and boring.

What was most disappointing about Pete Dexter’s story?

It was a toss between how bad the narrator was and how slow the book moved.

Get someone who reads aloud with expression.

Did The Paperboy inspire you to do anything?

Only to stop reading before the book was done.

Better then the movie

If you could sum up The Paperboy in three words, what would they be?

Better that the movie and so sad. I read it after I saw and loved the movie with John Cusack. It's so good as, almost better.I recommend the audible version.

Have you listened to any of Sean Runnette’s other performances before? How does this one compare?

It starts a bit slow and mundane…I almost stop listening but but found myself hooked.. It’s like sitting around the table after a wonderful dinner enjoying a dessert, a cup of coffee and listening to someone telling a delightful story… in this case it’s about the news paper business however it could be about anything if you enjoy being read to…just keep listening…

what a great read! worth the credit for sure!! would definitely recommend.give it a try.

This story well entertaining, but incredibly well-written. I am strict third person reader. I don't like first person. Yet somehow, I truly enjoyed it. And while the writing was impressive, sharp, and clean, it was (in my opinion), the narration that sold it all. A great, even, perfect performance that captured the tone and pace of the story. Well done, all.

A great story will keep you captivated all the way through, Well reread, Is loveday

A story that runs deep.

No one writes a story like Pete Dexter and the narrator brought it to life. I couldn't have used the listening time any better. Liked the book much better than the movie although that version wasn't a waste of time either.

A story that could change your way of thinking about things in general. And fifteen...

This is an all American tale of a murky little town down South, run by a sheriff renowned for killing black men and anybody else who takes his fancy. He has received his come uppance (sliced down the middle like an alligator) and a relative of his most recent victim is on death row. Job done? Of course not. The Paperboy of the title refers to the narrator of this story. He is a young man, thrown out of college, and now working as a delivery boy on his father's newspaper. His brother Ward is a charismatic reporter working on the Miami Times and he and his sidekick, Yardley Acheman, take it upon themselves to investigate the crime. In walks a femme fatale in the shape of Charlette Bless, a curiously determined yet vulnerable woman who writes to death row prisoners and has become engaged with the suspect without ever meeting him.
This is a brooding ponderous tale filled with murky characters some of whom are bordering on insanity. The one shining light is the relationship between the brothers. The younger man is perfectly aware of Ward's secrets but remains non-judgemental and constant throughout the story. The is far more to this than a straightforward detective story and the conclusion is intelligent and thoroughly satisfying.
Sean Runnette reads this in a slow reflective manner and initially I wanted him to speed things along. After a while I became almost hypnotised by his voice and realised he is perfect for this material.
This was a fantastic find on Audible and one that is thoroughly recommended.