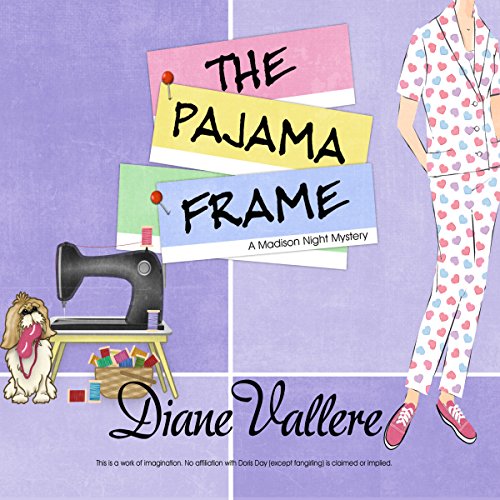 When interior decorator Madison Night's octogenarian friend dies and leaves her Sweet Dreams, the bounty is bittersweet. Once a thriving business, the pajama factory closed decades ago after a tragic accident took the life of a young model - or was that simply a cover up? Between her friend's death and her own stagnant life, Madison is tempted to hide under a blanket of willful ignorance. But when family members and special-interest groups lobby to expose the secrets of the factory, Madison gets caught in a tangle of secrets and lies and discovers that, sometimes, the bed you make is not your own....

Diane Vallere has written another good installment in the series. With plenty of laughs and a strong female lead, what’s not to like?

The best so far in this series

In <strong>The Pajama Frame</strong> by Diane Vallere, Madison Knight, an interior designer of vintage styles, learns that Alice Sweet, an 86-year-old friend, has died and left her Sweet Dreams, her husband's pajama factory that made history during World War II in hiring women. It continued in its progressive hiring methods into the mid-1950s until pajama model Susie Bixby was killed when a steamer malfunctioned and created serious burns. When rumors started to circulate that George Sweet, Alice's husband, was having an affair with Susie, he abruptly closed Sweet Dreams and became a traveling salesman. The factory got immediately shuttered, never to open its doors again. And now Madison has inherited the building.

Local historical people have learned about Alice's recent death and have been picketing to get the police to unseal the building, so Madison calls her friend, Captain Tex Allen, to help her with the situation. When Madison goes to the storage place to retrieve papers on the factory left for her by Alice, she finds a gun, and it has been fired within the week, which doesn't make sense for a storage place owned by Alice. Then, Tex takes Madison to the factory to examine it, and they find the body of John Sweet, the step-grandson of Alice, shot with the same caliber gun as found in the storage space. Trying to find somewhere to go, Madison drives to the law office where John works as a secretary, only to discover the shot body of John's lawyer boss, Mr. Stanley.

<strong>The Pajama Frame</strong> is a fun, gently humorous book that continues a series based upon a main character who loves Doris Day and who has a historical of working with Captain Tex Allen to solve mysteries in prior books. If you haven't read the previous books, I recommend doing so before you read this one, though it can be read as a standalone book. The book is a creative text that makes it truly fascinating. Further, the title suits the pun of the Doris Day movie that Madison is scheduled to show at the old theater where she volunteers, while also fitting the concept of the pajama factory.

I thought the plot was stronger than the previous two books, with a more straightforward set of details, but creative twists to the main points of the plot. The many people who seem to be involved in the case also include a large number of people we have seen in other roles but who suddenly appear as people with personal connections to the case. The way Madison and Tex work together to solve the case together is well-presented. There was a side issue that did not get solved, but I wonder if the point was to show that we won't ever know all the answers.

I like the characters in <strong>The Pajama Frame</strong>. Madison is very real and comes across as genuine, a person with heart to help others but who is not a total angel either. The character of Nasty, the nickname for Tex's former partner, both in crime fighting and in bed, is a complex figure, one of sneakiness and duplicity. But the most complex and interesting character is that of Tex, with whom Madison has a lot of romantic tension. She earlier chose to date Hudson, her handyman whom she cleared of murder in the first book. But Hudson is in California, and Madison has always had a special connection to Tex.

The audio version of this book is performed by Susie Berneis, and I like the choice of her voice for Madison, from whose point of view the book is told. She uses a highly believable voice for Tex and does a great job of creating the romantic tension between the pair. Berneis has continued to do a great job with this series.

I really enjoyed listening to <strong>The Pajama Frame</strong>. The mystery plot was creative and fascinating, and the characters just make it all the stronger. I appreciated the many elements to this book and give it five stars.