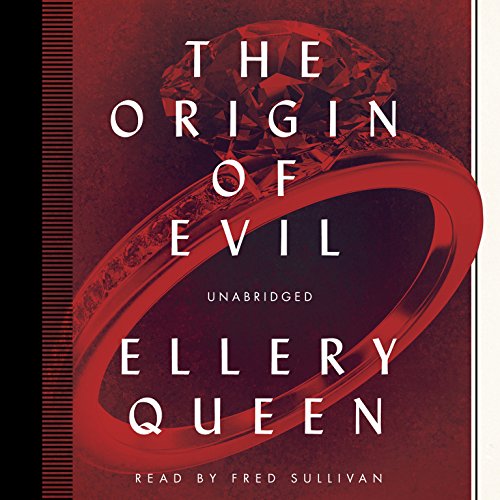 Having escaped New York with the hopes of finishing his latest mystery novel in peace in Los Angeles, Ellery Queen is shocked when a knock on his door lands him right in the middle of yet another mystery.

Leander Hill, a prominent Hollywood jeweler, recently died of a heart attack after receiving a package containing a dead dog, a sight that literally frightened him to death. Hill's daughter is convinced the act was premeditated murder and enlists Queen's help to catch the killer. Now Queen must harness all of his skills to prevail over this unscrupulous mind.

No Inspector Queen here, and is absence is felt. The story is very enjoyable. Queen loves to give "the false solution" to be followed by "the real solution", and here it's very effective. I thought the book was done, but when I realized there was a chapter left, I knew something was up! What lets this down as an audiobook is the narration. Sullivan gives everything a flippant tone, and his voice for Ellery is absolutely horrible! He makes him sound...well, fey is the only word I can think of. The other characters are well voiced, but he makes the detective sound like a whiny, spoiled brat.

Made of pulp magic

Good story - not so good to listen to.

I am 70 and have pretty good hearing but this narrator’s voice went up and down in tone and volume - I had to keep adjusting the sound when I was listening on my iPhone speakers. With ear buds it was easier to hear. I haven’t had that issue with other narrators of the Queen series. However, the story was good.

story is a continuation of the evolving queen character. story is enjoyable, but again, it feels more like a story than a detective novel.